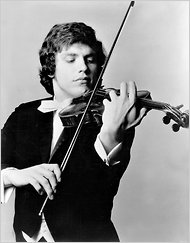 Indeed, they do reflect on events within the violin world and continuing issues about practicing our art overall. As for news in the violin world: 2011 brought some deaths: violinist Eugene Fodor, luthier René A. Morel, violinist Josef Suk and Suzuki pioneer and pedagogue John D. Kendall. Young people also showed their emerging talents at competitions, including the Sphinx Competition, the 2011 Fischoff National Chamber Music Competition, the Primrose Competition and the Tchaikovsky Competition. Other news included Hilary Hahn's encore commissions; the premiere of the first major documentary on Jascha Heifetz; Gidon Kremer's public rant against the Verbier Festival and young artists in general; the arrest of violin dealer Dietmar Machold and more.

As for 2012, here are a few of our plans for Violinist.com: We'll start the year with a Mahler Marathon, when I go to nine Mahler Symphonies, performed over January and February with Gustavo Dudamel conducting the Los Angeles Philharmonic and the Simón Bolívar Symphony Orchestra of Venezuela. Look for more interviews, as well as a continual expansion of our new Frequently Asked Questions page (talk to me if you'd like to write an article for this); a violin terms glossary; the return of our Violinist.com T-shirts as well as some new V.com tote bags; and also, the publication of a "Best-Of" e-book with Violinist.com interviews. As always, we welcome your suggestions for content and improvements!

6. How to practice, in six steps

10. Violinist.com interview with Nicola Benedetti: Bruch and Tchaikovsky Concertos
11. How strings are made: a tour of D'Addario Strings plant

13. Julie Lyonn Lieberman on How Violinists Can Prevent Injury with Proper Stretches and Set-up

15. You can play in tune without a chromatic tuner: Ringing tones explained

The top 15 Violinist.com discussion threads of 2011:

1. The 2011 International Tchaikovsky Competition Has Announced the Violin Competitors And Will be Video streaming many shows!

3. Private Teacher on the Brink of Tears

5. The return of Tricolore strings

7. Famous violinists playing out of tune

8. Pain in Center of Palm and Pinky?

9. Not allowed to practice?

12. Is it possible to become a professional violinist if i started

From William Wolcott
Posted on January 1, 2012 at 11:07 PM
Though I was devastated to hear of the loss of my great teacher and friend, Gino... :( .... it is with equal sadness that I bring the news of Israel Baker's passing as well. He passed away on Christmas, a week ago today, I was told.

Though I only worked with him a short time, his influence on me was quite profound, and we have indeed lost one of the greatest violinists the world has known.

That would have to be a first...

While studying the violin I lived near Los Angeles, and it was common knowledge that a contract at the studios was akin to the Holy Grail. I was fortunate to often have Israel Baker as a guest at our home, and his appearances were always memorable. He would often announce his arrival via the telephone installed in his Oldsmobile (an unheard-of novelty in the late seventies) and one evening he played for us Paganini Caprices ...on a viola.

Iz famously claimed that he never practised, because his studio work kept him so busy, but it should be noted that he also played "serious" music as well, as his recordings with Jascha Heifetz will testify. His nonchalance on stage was legendary. My father, concert pianist Julien Musafia, who performed with him on many occasions, recalls one time when during a cello solo in the Beethoven Triple Concerto he supplied my father with hot stock market tips.

In addition to the Jules Garcin Stradivari, he also played a Gand & Bernardel.

From Kathryn Woodby
Posted on January 2, 2012 at 9:32 PM
Re: the FAQ page--I just found a blog (http://www.violinist.com/wiki/violinings/) through my search engine that I think should go on the FAQ page! This was a great guide!

Thanks for all v.com does. This is a great community. I think it keeps us all learning, growing, thinking, appreciating, and loving our music and our fellow musicians in a wonderful way. Kudos to Laurie and all the wonderful, thoughtful contributors!