Once again I offer you scenes from the the Rose Parade – not the part at the beginning, by the T.V. cameras, where the floats emerge straight from the package, the band members have an exuberant glow in their faces and a spring in their heels...

No, I offer the unique view that we scrappy folks at the tail end of the five-and-a-half-mile route see. It's more of an experience than a show, and since I'm on the whole “create an experience” kick, here goes.

We emerged from V.com World Headquarters (okay, our condo) in Pasadena around 8 p.m., hoping to catch the B-2 Stealth Bomber, which in previous years has sent our spoons flying as we ate cereal before the parade, while our neighbor Rosie points from her south-facing balcony, “Mother of G... that F....” Okay you know I won't tell you what Rosie says, but it's an expression of awe, fear, amazement, as this black triangle of death sweeps low over our homes. But this year it never came, and it was a source of disappointment among the natives, particularly Paul, here, with his new camera, who waited for the same thing on the roof of his house. 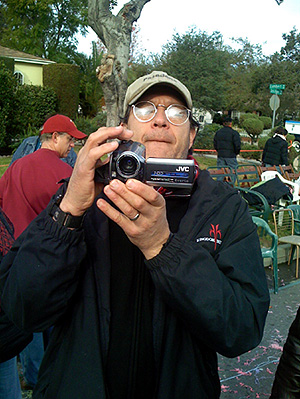 We came back inside, watched the first few floats on T.V., then knew it was time to get going. The beginning of the parade would arrive at our designated area in about an hour and a half. As I left the house, I noticed a message from my sister in Cincinnati, who was watching the parade on T.V.

As we walked north, through the middle of the cleared street, lined with people who'd been out there all nights with their sleeping bags, stoves, people who were throwing footballs and shooting silly string, we found ourselves walking past a little band of happy people in orange, chanting, waving their arms, banging a drum. 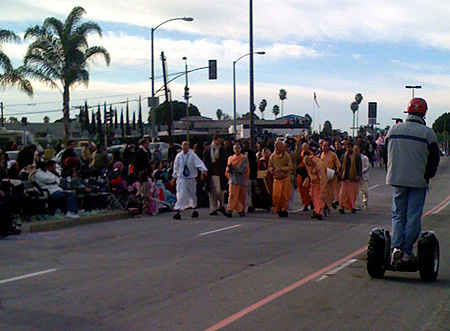 We found our friends, who had three rows of lawn chairs that various other friends had brought by over the last few days. They've made an art of saving this little patch of sidewalk every year for the parade for some 25 years. The first year she invited me she said, “I'll never invite you again, you're just invited every year, we're always at the same place!” It's becoming an annual pilgrimage.

“We brought a band of Hare Krishnas, they'll be by in just a few minutes here,” I announced as we greeted our friends.

At last came the Rose cops on motorcycles, circling and doing little tricks, showing us it was time to sit down. I was shooting into the sun for much of this, but here is a bunch of pictures: