An Interview with Sam Zygmuntowicz

April 9, 2007, 9:27 AM · Brooklyn-based luthier Sam Zygmuntowicz is the subject of The Violin Maker, a book by John Marchese. The book, which came out earlier this month, follows Zygmuntowicz as he makes a violin for Emerson String Quartet violinist Eugene Drucker. It's an interesting read, between Marchese's trumpet-player perspective, Drucker's keen sense of what he wants in a fiddle and Zygmuntowicz's meticulous process. The author followed Zygmuntowicz for a year, and I was curious about how the violin maker felt about The Violin Maker. Here's what he said:

Q: Were you at all hesitant to have someone follow you, making a violin?

Zygmuntowicz: Yes, a bit. Of course, any project like this is time-consuming and distracting, and you become vulnerable when you open yourself to a journalist, who will reinterpret your ideas. One can only hope that a writer or journalist will "get" it, and look behind the romance and hype that is often common in the media. 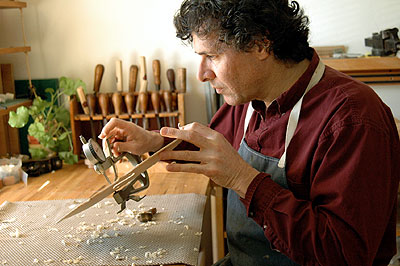 Q: What made you agree to have John write this book?

Zygmuntowicz: Many people are casually intrigued by the world of the violin, but most don't really know what is challenging and compelling to those of us inside this world. Reflecting on the nature of the work and expressing that vision is another form of creative expression for me, and deepens my feeling for what I do. There is more to it than carving wood.

Q: What do you think of the book?

Zygmuntowicz: Our field can seem impossibly arcane to someone who is not part of it. I think John began with that outsider's reaction, but he took the time to get an inside view. He is a very good guide, and captured much of the flavor without getting too technical. An insider might have written a more detailed but less enjoyable book.

Q: John Marchese told the that the violin he wrote about has changed hands. What instrument is Eugene Drucker playing now?

Zygmuntowicz: Eugene has performed and recorded several Emerson records with the new fiddle, and it sounds good in a hall, but it wasn't a natural fit. Recently a Strad copy of mine became came back to me, and it seems to suit him much better. The response is more similar to his Strad, and we both think that it worked better for him, it was a bit more velvety and malleable, but still with a lot of power.

Q: Who is currently playing the violin that you made for Gene Drucker?

Zygmuntowicz: Joshua Bell recently tried Gene's fiddle, and it seemed to really take to it. We just did a little play off in Carnegie, along with his current "Zyg", his Strad and a nice Guad. He is now comparing Gene's to the "Zyg" fiddle he already has. Stay tuned!

Q: How do you feel about it when a violin commissioned for one player ends up in the hands of another?

Zygmuntowicz: I prefer it when it's a love match, but I try not to get too attached to any one violin and not to take any feedback personally. It's not that I don't care, but it's important that the musician feels comfortable discussing any concerns. If one of my violins is not really working perfectly for its player, I'll adjust it, or fix it, or modify it. And if they still aren't happy I'll willingly take it back, and pass it on. That's very rare, but a violin's life is longer than ours, and you never know where things will wind up.

Q: Which, of the violins you've made, have you felt most attached to?

Zygmuntowicz: The two violins that I built for Isaac Stern will always be a high point for me. Stern was a cultural hero in my family from when I was a child, and it was an huge honor to work with him. I'll always be grateful for his support, and those fiddles later made a bit of their own history in the Tarisio auction of the Stern Estate.

Q: Where do you see the art of violinmaking going in the future?

Zygmuntowicz: We are in very interesting times for the violin. On one hand, the field is getting crowded with competent makers, including many in China. On the other side, the upper reaches of skill and knowledge are climbing, and new violins are being used by the some of the most prominent players. That is where the current challenge is for myself, and some of my colleagues.

One can't hope to compete with or even surpass the Strads just by trying to blindly copy them. There is a very active push to extract the knowledge and principals that are hidden in the old violins, and use that insight in a dynamic living way. It is a question as to what will be the next frontier. For some, it will lead to unexpected innovations; for others, to highly optimized making, but still in a traditional format. This is where my own efforts are going for now.

Q: How many violins have you made at this point?

Zygmuntowicz: About 170 instruments including violas and cello's.

Q: What are you working on now?

Zygmuntowicz: I am slowly but steadily working my way through my commission list, including a quartet of instruments for Yo-Yo Ma and members of his Silk Road Project, which I am in the process of designing.

I am also increasingly excited by acoustic research and experiments, both at the Oberlin Violin Acoustics Workshop and in my own studio. I've been helped by Norman Pickering and Oliver Rodgers, and this fall I brought two of my favorite Strads and a Guarneri for a 3D laser vibrometry study directed by Dr. George Bissenger. This work is deepening my understanding of violinmaking in unexpected ways. Every day now has some "Aha" moment where some obscure detail begins to reveal its function. We'll see where it all leads.

April 10, 2007 at 03:29 PM · I think they are also in demand, which raises the price. I didn't ask what the price range is. He is a member of Violinist.com, if you want to e-mail him to inquire, you can click on his name. He's very friendly!

April 13, 2007 at 04:39 AM · I had the amazing opportunity to sit in a dress rehearsal of the Emerson quartet this evening. I don't know which violin Mr Drucker was playing, but it certainly sounded fabulous!!