Just when you think you know what is possible on the violin, then comes Hilary Hahn in recital.

Take it from a young person: "It was amazing, how she could pizzicato while still playing, and double stop so fast, and get so high and double stop so fast!" said Ben Penzner, 11, a viola student at Renaissance Arts Academy, during the intermission at Hahn's recital Friday night at Occidental College's Thorne Hall. Hahn had just brought the entire house to its feet with a exciting performance of Ysaye's Sonata No. 5, with the final "Dance Rustica" so well-articulated and true to its dance nature, I had to keep from stamping my heel on the floor to the beat. I wrote in my notes, "This is no ride; she's driving, driving, driving... OMG!"

"I didn't think it was possible," said Penzner, who had heard great recordings of Jascha Heifetz, but never a live performance of this kind. 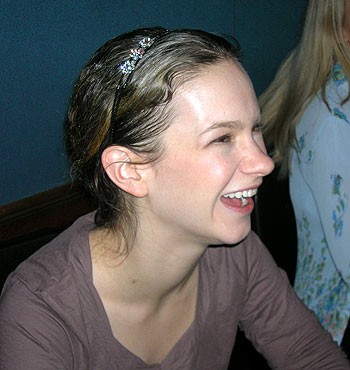 Hahn signed autographs after the recital.

It wasn't just the young people who were impressed in this way, though there were a significant percentage of them in this audience of about 450, including Suzuki students, high-schoolers and college students. Hahn had spoken at Occidental College the day before and invited music students from neighboring high schools to her Q and A session.

I was profoundly impressed, too, even though left-hand pizzicato and double-stops are rather old news to me. I found Hahn to be the kind of artist who stretches one's concept of what is possible technically, musically and intellectually. Two potentially conflicting ideals coexist harmoniously in her playing: an unflagging faithfulness to composer and genre, and the ability to put her own stamp on each piece.

The recital included works by Franck, Mozart, Ysaye, Ives and Brahms, with an encore, "March for the Love of Three Oranges" by Prokofiev.

The program began with the Franck Sonata, a piece which really ought to be called "Sonata for Piano and Violin," for the notoriously difficult piano part. Despite the fact that I've heard this piece many, many times and played it myself in recital at least three times, I always hear "new notes" in the harmony when an excellent pianist plays the Franck. Pianist Valentina Lisitsa brought out just this kind of detail; the great washes of sound during the piano interludes in the first and fourth movements had a lucidity that was refreshing.

I also noticed that Hahn seems to be able to do whatever she wants wherever she wants in the bow. For example, the hushed, sneaky-sounding pattern at the end of the second movement (at G), which leads into the frenzied ending, is often played at the tip for its naturally quiet qualities. But she was perfectly quiet in the middle of the bow, I can't even launch a complaint.

For that matter, I wondered at times if her bow were actually nine miles long, as she never seemed to run out. At the end of the first movement of the Franck, she left about two centimeters of bow for the last note, but played it with a kind of spaciousness that made one think that she was in absolutely no hurry to end and could make those two centimeters go on for days if she felt the need.

For me, Hahn and Lisitsa's joyful and energetic Mozart Sonata in B flat K 378 was the highlight of the evening. Hahn's interpretation of Mozart runs about 10 layers deeper than your average, ubiquitous renderings of Mozart. Her every articulation was placed just so, she had a great range of crescendi, and her grace notes were so perfectly quick. I just wanted to laugh with delight. The end was incredibly fast, full of the most treacherous, easy-sounding, impossibly awkward and exposed, devilish notes, with violin and piano playing in unison. It sounded like negotiating an intricate rat maze, at 90 mph, and they ran it without a flaw.

I also enjoyed the Allegro in the Ives Sonata, a mercurial and jazzy romp. Hahn's fast, syncopated "tune" rode atop a chaotic and noisy piano part, to great effect. Everyone clapped afterwards, even with one movement still remaining; they couldn't help it!

Hahn and Lisitsa ended with the Brahms Sonata in A, Op. 100, one of my favorite pieces. Immediately, I understood that Hahn was playing Brahms, and that she would remain true to the heaviness of this composer throughout. The second movement has a buoyancy to it, even a temptation to put on ballet shoes through certain passages, but she kept on the right kinds of shoes; it was clearly a Brahmsian buoyancy, marked with a bit more length.

Hahn's recital lasted nearly three hours, but that didn't keep 100 or so people from staying to see her afterwards. Hahn changed from her glittery white gown into jeans and a T-shirt then came to the lobby, where she autographed CDs and greeted her fans. So it is possible: to bring a young crowd to a long concert of serious classical music, and to have them love it in return.

From David Russell
Posted on October 20, 2007 at 12:15 PM
True to form, Hilary delivers! Her recitals are full and fascinating and you sense she is giving 100%. It is such a high standard she is setting!

Mr. Brodsky would be so proud.

From Tom Holzman
Posted on October 20, 2007 at 8:23 PM
Thanks for the review. She was her usual gregarious self. I am glad to hear you liked her Mozart so much. When I heard her a couple of years ago, I thought she did not quite have it yet. Most of the great recordings of Mozart are by violinists who were older than she is and from Europe (Szeryng, Goldberg, Grumiaux).
From Pauline Lerner
Posted on October 21, 2007 at 4:53 AM
Thanks for writing the review for us, Laurie. You told us about so many important details, that I almost felt that I had been there. Hilary Hahn's technical skills are so very good that she makes it all look easy. (Ha! I wish it were.) I'm also in awe of her ability to evoke varied, strong emotions in her listeners.
From Jim W. Miller
Posted on October 21, 2007 at 9:31 AM
I like this photo. It has a genuine and magnetic quality about it. I've only seen studio photos, or blurry photos taken from a distance.

I hope she will pick a thread and join in. She signed up for some reason. Everyone is impressed of course, but I don't think it would cause that much of a riot.

From Laurie Niles
Posted on October 21, 2007 at 11:50 PM
Robert took that picture while she was signing autographs; she was really generous with her time, staying quite a while after her rather demanding recital to sign CDs and talk with people.

I think she is just dipping her toe in, at this point, with V.com. She said she'd perhaps write a special-occasion blog now and then, if I could suggest ideas. I think that whatever she does, it will be authentic, but it might be rather rare, at least in the beginning!

From Wayne Rogers
Posted on October 22, 2007 at 11:42 PM
I had the pleasure of watching the concert from the second row. I could hear the surface noise, what little there was and see the amazing bow control and left hand flexibility. What impressed me most about the concert is that she was in such technical control that the focus was on the music. In the Ysaye, she brought out elements in the torrent of notes that might have been lost with anyone else.

After hearing her only in recordings, I had a lower expectation for the recital. How wrong I was!