Why an energetic performance isn't energizing the audience...

January 17, 2007, 11:36 PM · Sometimes a very energetic performance does not actually energize the audience...why is that?

I wanted to elaborate on that problem, and what teaching pedagogue Helen Brunner had to say about it last week at a series of master classes she gave in Pasadena. 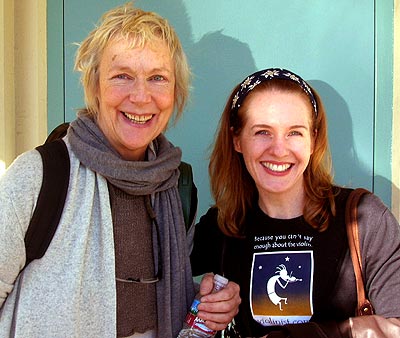 If a performer directs energy outside of himself or herself, the result can manifest with stamping, walking around, swaying wildly, dipping.... Though the acrobatics may be visually interesting, the energy does not come out in the music. Instead, the energy goes into the physical movements of the performer.

Not that performers should stand stock-still; movement is fine, as long as the energy is not misdirected.

Helen Brunner described how to harness that energy by describing something very similar to a tree pose in yoga: from the belly button down is "root energy." The energy goes down and stabilizes your foundation. From the belly button up is "up energy," this is our energy for thinking, doing, and raising us upward.

She said the energy should be centered in a place about an inch below the belly button. She had everyone stand up, root their energy downward, stand up straight, and find the place just below their belly button.

"That's your dynamo!" she said. "You need to keep your energy inside; keep it in your tummy."

If you are sending energy all over the place, it's very possible you are not rooted, not standing upward, and that the center of your energy is much higher.

And here is a little something about teaching energy, since Helen is a trainer of teachers and spent a good deal of time as a teacher trainee with Shinichi Suzuki.

"Suzuki felt strongly that everyone should do every piece in repertoire (his Suzuki books), but he was open to other things," she said. "He was passionately interested that each person take his principle and make it his own."

What I take from Suzuki's ideas and from Helen's example is this:

There is no one, true method.

January 18, 2007 at 08:07 AM · The concept of energy and its direction is described well by William Starr, one of Suzuki's disciples, in his book "To Learn with Love." In fact, he devotes a whole chapter to it. He discusses it in the context of aikido, an Asian philosophy/practice similar to qi gong, Zen, and yoga. He believes that the experience of centering/balancing one's internal energy has major effects on playing violin. It is part of a deep relaxation and freeing of energy which is strongly rooted in various Asian cultures. He has taught Suzuki method throughout the world, and he has noticed that Japanese children show a deeper sense of inner relaxation and balance than their counterparts in Europe and America. In the book I cited, he advocates beginning lessons with some form of progressive deep relaxation. He has found that it is very beneficial to both mind and body of the student. I note that it's difficult to express some of these Asian concepts with our English language.

I have William Starr's The Suzuki Violinist, and I recently noted towards the end of that book a small section of relaxation, etc. that refer specifically to what is being discussed here. And indeed, I found it fascinated even though Starr did not go into any details in that book. I was also interested in the notes about bowing, etc. as it loosely relates to this matter.

I've always wondered if there is a strong connection between various aspects of kung-fu/martial arts/etc, especially in forms like tai chi (and even qi-gong or chi kung as it relates to the kung in kung-fu and the chi in tai chi), and the various other art forms including dance, music making, etc. And Starr's notes in that book and the discussion here all points to that connection.

And yes, as I understand it, the central spot just below the tummy, roughly level w/ the pelvis, is the most important/center point of qi-gong where one's chi flows to and fro much like the human blood circulatory system centers on the heart. This idea of chi is also important to Eastern/Chinese medicine. Although I am not an actual student of qi-gong and such, I'm aware that it is not quite correct or ideal to describe chi as energy. It might be better to describe it as a sort of metaphysical, even spiritual, force. And indeed, the notion of the Force in the original Star Wars films was also taken from the more fantastical, romanticized versions of qi-gong as described/displayed in various kung-fu (or rather more accurately, wuxia or martial heroic) films (and novels) that preceded Star Wars.

BTW, most anyone who have been exposed significantly to Chinese concepts about how one gets sick, allergies, tummy aches, nose bleeds, etc. etc. will also have heard of the notion of chi. We often talk of "hot" chi or "cold" chi regarding foods, especially those w/ herbal medicinal value, etc. Often, people say foods that tend to cause allergic reactions have "hot" chi though it's not clear to me whether that is really what *authentic* Eastern/Chinese medicine would say. :-)

It's all fascinating stuff, especially since I'm now a (very new) amateur violinist. :-) I often find myself pondering vaguely about how tai chi and such could be used to help my violin technique. :-) For instance, I found the fluid hand movements of tai chi helpful in understanding basic bowing technique. I also found the Chinese word for violin playing helpful there as well as it literally means "to pull on the violin" -- as in the nearly vertical pulling motion involved in bowing (or at least the notion of it as one bows as also described in Starr's book The Suzuki Violinist)...

January 21, 2007 at 08:38 AM · Indeed, weight into the string when bowing is a better concept than "pressure," an idea which can lead to unnecessary stress and tension. I do think the Western-based art of violin playing benefits tremendously from Eastern thought.