Connecting the violin with rock: We can arrange that

Ever wonder why you need to take math, if all you want to do is play in a rock 'n' roll band?

I found the answer to this eternal question while carpooling last week to New West Symphony rehearsals with my friend, Melissa Reiner, aka, Rock 'n' Roll Melissa. 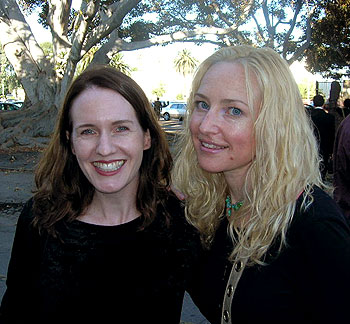 Melissa not only wears cool shoes and plays in rock 'n' roll bands, but she also earned her degree in violin performance from Peabody Conservatory. She's a reliable stand partner in orchestra, attentive to musical details. Plus she's a bookworm who learned to read when she was two.

Last week, between almost nightly orchestra rehearsals, she was also putting together a string quartet arrangement for Joshua Radin and his band, with whom she will play tonight on Jimmy Kimmel Live.

"Making an arrangement is very mathematical," she said, during a break from Beethoven 5. "I remembered a lot from my theory classes; I was really glad for all that rigorous training at Peabody."

Melissa has played for quite some time with Joshua Radin, so when he fell in love with the idea of having a string quartet accompany his song, "Star Mile," she was the logical person to take what she already had been doing by ear and set it on paper for a string quartet. She put herself to the task of balancing what she knew about the singer's genre and preferences with her own ideas about what would work with a string quartet. Also, she was balancing the instrumentation, because they would have to forego some guitar to get the right number of musicians on stage.

She wanted to make it interesting, but still within the bounds of comfort for the band.

"For example, singers don't necessarily like a lot of passing tones," she said. "But having a few in there is really nice."

Since her arrangement would see its premiere on national television, she had a few friends come over Sunday night to play it through, in case there were any bugs.

"It was really exciting to hear what I had done come to life," she said today, on her way to the studio. "I wasn't thinking of it as a big creative endeavor, I mean, it's someone else's song, but it was creative and fun to do."

The song "Star Mile," which is rather Simon and Garfunkel-esque, is featured in the movie The Last Kiss, which came out Sept. 15. The movie's star, Zach Braff, hails from the same school as I do, Northwestern University, and you can hear the song by simply clicking over to Zach's MySpace page. And if this suddenly makes you want more well-crafted, new pop music (a rarity these days, and not easy to find on the radio), here's some fun video.

From Ray Randall
Posted on September 19, 2006 at 6:55 PM
Thanks for the heads up. We'll tune in.
From Gabriel Kastelle
Posted on September 19, 2006 at 8:21 PM
Good for spreading violin!! It may survive yet.... Interesting college trend: examples U. Penn (Ivy League) and Temple U. (big state school) in Philly each have been giving credit for five-ten+ years to advanced music theory in distribution requirements the same as for rigorous math and science. I mean, you can co second-year music theory instead of calculus or P-Chem, and graduate! And there is such a thing as Music Theory AP. Theory rocks! Enjoy!!
From Donna Clegg
Posted on September 20, 2006 at 1:23 PM
Thanks for the link to rehearsals.com. Cool videos. RocknRoll Melissa is awesome.
From Jim W. Miller
Posted on September 20, 2006 at 2:31 PM
Melissa. Rawrrr.
From Karin Lin
Posted on September 20, 2006 at 9:52 PM
Interesting post, Laurie, thanks! (Though I still maintain that everyone should know a certain level of math, regardless of his/her profession; it's basic education as much as history or literature.) That's fascinating about advanced music theory substituting for math requirements, Gabriel. I think I support that decision, depending on how advanced it really is; at the level of the AP exam---which is about the extent of my own knowledge---it doesn't seem THAT mathematical, but definitely becomes more so the more you get into it.