BEAVER CREEK, Colo. -- I'm not sure quite how it happened, but somehow I was swept up in the moment and found myself on stage, with about 75 other believers, pledging my soul to daily practice.

Specifically, I took a vow to practice every day for an entire year.

Helen Brunner made me do it. We were watching the recital hour at the Colorado Suzuki Institute, when about 35 students came to the stage to receive an award.

"These students know how to make a promise, and keep it," said Colorado Suzuki Institute Director Gail Seay. Every one of them had practiced every day, for an entire year.

"Now, if you would like to make this promise, to practice every day for the coming year," Seay said, "I invite you to come to the stage."

When all were standing in a line, Helen asked, "Is that Madison up there?" Madison is a student in Helen's master class qho had played a particularly lovely Mozart Minuet earlier the same day. Indeed it was. Perhaps her practice routine had something to do with her fine playing.

Helen flashed me the look of someone about to take a life-threatening dare.

"I'm going up there!" she said. She hung back for just a moment, then said, "I've got such a good violin, it deserves to be practiced every day."

Before I could blink, she was halfway down the aisle.

Oh geez! I suppose the Italian deserves my daily attention. But...am I the kind of person to go flying up to a stage, to make a vow? Well...

So I did it, I took the pledge along with about 70 other students and teachers. Including Helen, who said her heart was pounding so hard when she walked onto stage, she was sure Gail Seay could hear it.

As I was leaving, in the daze of one who has supposedly found the light, I decided to ask a few of those who had actually lived it, found the true way of practicing. 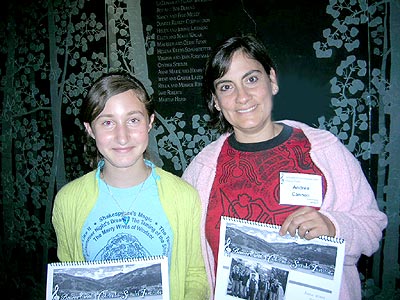 "I've never missed a day of practice since I was three," said Madison Alan-Lee, 12, of Sherman Oaks, Calif., without a hint of snobbery. She was holding the practice calendar she had received as an award for her accomplishment. "It's just habit now. It's almost hard if I don't do it! Once I almost didn't, when I was sick, but I dragged myself downstairs and played."

Another successful convert was guitar teacher, Andrea Cannon, of Spring, Texas, who had made the vow last year, and kept it up.

"At first I did it because I thought the practice calendar was really cool," Cannon said. "But I love my guitar. It wasn't hard once I made the decision."