Emily's dad was trying to explain to her why Amanda Ransom's family was giving a special lecture Wednesday at the Colorado Suzuki Institute about her journey with the violin. Amanda, 19, has Trisomy 21 (Down Syndrome). And yes, she is in Suzuki Violin Book Three!

The kids at this institute truly see her as another student, like them.

"We found this was an environment where we didn't have to worry about Amanda," said Dave Ransom, Amanda's father. "They treat her like a normal person." 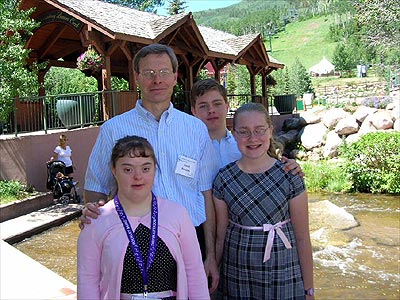 Dave spoke at a lecture tent in Beaver Creek to teachers and parents attending the Colorado Suzuki Institute. He began by reading an essay that compares raising a child with special needs to planning a vacation, and then having the plane land in a different destination, some place unexpected that requires new guidebooks, new maps. A place that has entirely different vistas and attractions, but still a good place.

This was not the positive outlook given them by the physicians who told them the news about Amanda's condition: they were given a bleak prognosis. But as Henry David Thoreau said, "The question is not what you look at, but what you see."

The Ransoms saw possibilities. Amanda's form of Down's means that each cell in her body has an extra chromosome 21. Dave compared it to a computer's hard drive, "extra information makes the body slow down," he said.

While normal children need something like the Suzuki method to help them learn to play the violin, "with Amanda, we had to come up with a method to help her do everything in her life." They could not take for granted the developmental milestones that other children achieve on their own: they had to teach her to turn over in her crib, to sit up, to walk, to speak. They had to pick up each of her hands to teach her to crawl.

The Suzuki Method, which breaks learning into small steps and uses much repetition, fit very well with Amanda's style of learning.

"What works with you guys is exactly what worked with Amanda to teach her the basic milestones," Ransom said. "We knew after the first lesson that Amanda would play the violin."

"People with special needs are just that," he said. "If we put them aside or treat them differently, we are doing them a great disservice."

Ransom showed a 2003 video, in which Amanda plays and sings with her younger sister, Amelia, who plays the violin, and brother, Michael, who plays the cello. The song is "Amazing Grace." They begin with both girls singing a verse to Michael's accompaniment, then all of them play in three-part harmony. At the end, the two girls sing the last line, "was blind, but now, I see."

As the video winds to a finish, Amanda, who has been sitting in the front row and helping her father during the lecture, cues him to stop the tape.

"Good job!" she praises her father happily, when he successfully stops the tape.

June 15, 2006 at 12:53 PM · Thank you for the wonderful reminder about how everything is possible, and everyone can learn!

My sister has disabilities and when we were young my parents wanted to provide equal opportunities to both of us, so she was in Suzuki piano lessons for a number of years, and learned to play all of Book 1 & 2. Of course this requires a patience teacher along with a patient parent helping every step of the way :)

Imagine having a whole studio of children learning what many imagine as not possible, that would be incredible...