Guess who's coming to practice?

I've been trying to hide it from the world but... I'm in love. 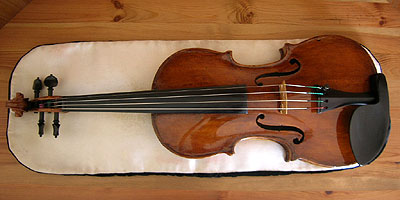 What to do, what to do. I was just going to date this fiddle, and now it's asking me to get married, and this time my parents have not volunteered to pay for the wedding.

It was a chance meeting, I live just a block away from a violin shop, and while I was there after hours, getting some strings, my good friend who I'll call for the moment My Dealer or maybe Mr. Matchmaker, said, "Hey, I've got this violin you might like. Why don't you give it a try?"

Yeah, right, right, I'll humor him. As if I'm even thinking about a new violin at this point. It's a Gagliano family fiddle, with a later scroll, with a number of cracks that bring down the price, though not so much that it wouldn't still be a tremendous feat to buy it. Right, I'll try it!

So I played it. I played in that room for a mighty long time, Mr. Matchmaker there listening to me play. "After all these years, Laurie," he said. "I've never heard you play. I never knew you played so well!" Frankly, I never knew I played so well, either. I played everything I could remember on it, Bach, Tchaikovsky, Meditation, more Bach. I think it liked me, because suddenly I felt like the fiddle itself was making requests. Suddenly I was playing the Wieniawski Concerto, which I hadn't played in nearly 20 years. I even found myself playing the Brahms, until I realized, hey wait, I don't know how to play the Brahms. I took this fiddle off my chin and looked at it. Enchanted piece of wood?

"Take it home for a few days, see what you think," said my friend. As he was signing out the fiddle, I nearly started to cry. "What's wrong, Laurie, this is a good thing!"

But I actually want it! This is not a good thing!

In a state of insanity, I called my parents. I called my coach. This was all while I was walking home. I came into our apartment.

"Laurie what took you so long?" asked Robert.

"This violin!" I said excitedly, and I started opening the case, had the fiddle out, started playing. "See, see! It's responsive! I can play so much, I just can't believe it..."

"Laurie," Robert said soberly, "You weren't looking for a violin. Especially at... that price."

"I know," I said slowly, "But I'm just going to die one day, whether I get a good violin or not. I can wait till I'm 65 and can afford it, or find a way to get it while I'm still playing, while it still makes a difference."

My Dealer has let me borrow the violin a bit longer. I'll use it for my LA Phil audition. I've shown it to a lot of people, and I know all its cracks and flaws. And I still love it, and I still want it. I've had people fall in love with it, too. And I've had other reactions. One person looked at the cracks, said it wasn't worth the price, said he could find me a better one for less. I've tried about 10 others, but I still want this one. Another said, "Sad to say, but the price isn't all that bad, for a really fine instrument. I mean, yes, it's that bad. But, no, it's not that bad!"

Another person whom I trust a lot looked it over and said, "I think it is what it is. The back matches the front, matches the ribs. It has all the characteristics. And it has a nice sound." Another violin maker said, "It has that Gagliano, honey sound." I've two different people play it for just a minute and hand it back, saying, "It's just so different from mine, I don't even know what to make of it."

But I do, I know exactly what to make of it: as much music as possible. Getting a violin like this would be a huge commitment, a commitment to make a lot of music, and make it well. No one can make this decision for me, about whether it's right to plunk down big money on a fine instrument. It really is like getting married, you have to decide yourself, is this the one? Then... it's a big commitment!

From Pauline Lerner
Posted on April 3, 2006 at 8:48 AM
Laurie, how can you stand to live just one block away from a violin store, especially such a good one? Congratulations on your new long term commitment. May it bring you good luck on your upcoming audition.
From William Yap
Posted on April 3, 2006 at 1:11 PM
I remember the feelings you are going through, but perhaps a little less intensive, and at my level, much smaller scale in terms of price.

The violin the inspires you to play, well, what else could a violinist ask for from an instrument? Find one perfect without craks and all, but does not give you the same level of inspiration, you are better off as a violinist with the one you love even with cracks.

Just my 2 cents. Besides, it is a very, very beautiful violin! Have a wonderful wedding!

From Kelsey Z.
Posted on April 3, 2006 at 3:22 PM
I like the bit about playing the Brahms and not realising you didn't know how to play it...I tried that at a lesson when trying out a violin only in my case it was the Ziguenerwiesen...it didn't take long until I fell flat on my face.

From Laurie Niles
Posted on April 3, 2006 at 3:53 PM
Thanks, you guys! Actually, I went through the same kind of thing when I bought my last violin, which was seven years ago. It was so much better than the one I had. I always say it was like I'd been trying to paint seascapes my whole life, and finally, I had the color blue. With this baby, though, I feel like I have a whole palette. And who knew you could paint more than seascapes? ;)
From Maura Gerety
Posted on April 3, 2006 at 4:29 PM
*sigh*....this reminds me, I've been carrying a torch for a fantastic Scarampella that I met at Encore last summer. It was from Reunings, so someone in the BSO probably bought it. :( Hope things work out with the Gagliano, Laurie!
From Karin Lin
Posted on April 3, 2006 at 5:11 PM
Hmm...a little brown for my taste, but it's not all about looks. ;) Joshua Bell compares finding the right instrument to finding the perfect partner. When he found his current violin, he absolutely fell in love and I don't think he's ever regretted what he went through to acquire it. Good luck!
From Ray Randall
Posted on April 3, 2006 at 6:15 PM
Hope it works out for you and good luck on the audition.
In 1974 I could have bought the Soames Strad for $25,000. It needed about ten grand of work the owner told me. Just having bought a house and being a young copilot we couldn't afford the Strad. I look back at that and think of it this way, and I mean every word. Had I bought that Strad I would not have the gorgeous 1909 Alfred Vidoudez that I have now that used to belong to Szigetti. I paid 3,200 Swiss Franks for it and it does all I would ever want from an instrument. Yours will, too.
From Christian Vachon
Posted on April 3, 2006 at 9:25 PM
Hi,

Laurie, I hope for you that you can get the fiddle! I know that feeling; had it last summer when I tried a fantastatic Guagagnini, which I could never afford (and wasn't for sale also). Hope it works. Nice to be able all that you want on an instrument.

I know from experience how addicting violin-shopping can be... be thankful he only let you try ONE fiddle! ;)

Laurie, just remember... you can live in the box the violin comes in. Who needs a pesky house to pay a mortgage on if you have a great violin?

From Gregory Zinkl
Posted on April 4, 2006 at 3:22 AM
Reminds me of my first violin that I fell in love with. Although in the grand scheme of violins, it was nothing special, but it was to me. Had a soundpost crack. It was a german fiddle, with a gorgeous French sound. But then *SOB* it cracked beyond repair.

I've never been the same since.

If you can do it, go for it! Matches happen so rarely in the instrument world with this kind of intensity!!

From Terez Mertes
Posted on April 4, 2006 at 3:27 AM
Oh my goodness, I'm shaking with excitement just READING this. Good luck - can't wait to hear how the adoption turns out! (Or is this labor you're in? How far apart are the contractions? How far are you dilated? Or perhaps that should be the dilation of the wallet?!)
From Karin Lin
Posted on April 4, 2006 at 4:03 AM
Ha ha, Terez. Wouldn't that be contraction of the wallet? :)
From Cora Venus Lunny
Posted on April 4, 2006 at 7:58 AM
Ooh, that is exciting. Your story made me feel a bit soppy, there. I have been struggling to pay off my Gagliano (also with a later scroll) for the last four years, and it's been worth every second of the pain. I'm married - this is it. I really hope it works out for you - good luck!
From Pauline Lerner
Posted on April 4, 2006 at 8:58 AM
When the violin plays you, you've got a perfect match. Enjoy!
From Jesse Irons
Posted on April 4, 2006 at 6:51 PM
I live in constant fear (and hope) that this will happen to me!
From Bernard Wong
Posted on April 4, 2006 at 10:07 PM
Laurie, wouldn't it be nice that you got the violin you love & got the job in LA Phil. What a wondeful ending! Best of luck.
From Eric Godfrey
Posted on April 5, 2006 at 6:52 AM
Love is not to be denied. If you can . . . get it! Especially while you are young enough to be able to get years of pleasure from it. One proviso: if the cracks represent past damage and repairs (which can lower the market price by as much as 2/3), you want to make sure they are stable. Have a good luthier look at it. On the positive side, if the repairs are stable and the sound unaffected, you have an uncommon find: an instrument whose equivalent sound in market value is several times what is being asked for it. If it's as good as you say, a voyage of discovery awaits; its potential will unfold as you adapt your playing technique to bring forth from it what lies within. There are few things in life as exciting as that!
From Emily Grossman
Posted on April 5, 2006 at 10:29 AM
Looks like you and I are both in love at the same time!
From Gregory Zinkl
Posted on April 6, 2006 at 12:23 PM
Well?!? Impatient readers want to know . . . is the marriage going to happen? The suspense is painful!!
From Laurie Niles
Posted on April 6, 2006 at 4:41 PM
I'm working on it!