New heights at the University of Denver

DENVER - One of my former teachers, Jim Maurer, is retiring as violin professor and chairman of the string department of the University of Denver (DU) after 35 years at the school. So I flew to Denver yesterday to spend some time with Jim and his wife, Jackie.

DU's Lamont School of Music has changed, beyond recognition, since the days when I took violin and Suzuki pedagogy lessons from Jim. Its new home is a $77 million, state-of-the-art facility that any music school would envy. Lamont's new digs include a 1,000-seat auditorium, a 240-seat recital hall, an 80-seat recital salon, a recording studio, 85 new pianos, classrooms with high-speed Internet, teaching studios that have different acoustical settings so you can sound like you are in a recital hall, cathedral or other setting, "virtual" practice rooms that have the same acoustical controls and 30 regular practice rooms. 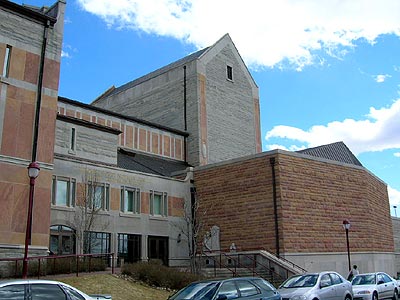 It was designed in part by acoustical specialists Kirkegaard Associates as a series of freestanding buildings separated by two-inch acoustical joints to minimize sound interference between rooms.

One feels a kind of reverence simply from the size of everything: the high ceiling of the atrium next to Gates Auditorium, the huge orchestra rehearsal room, the view of the Rocky Mountains from the "rose window" in the student lounge. It gives a dignity to the school of music that it did not have before.

This morning I practiced in one of the top-floor practice rooms. In it was a new upright Boston piano and bench, a window for light, a chair, a wooden ledge for belongings, a large rectangular mirror, a nice music stand, electrical outlets, lights and a trash can with a new liner. I had the sense that this building would not let me down; it was giving me everything I needed and then some.

During the afternoon, students and faculty heard from a candidate for the violin professorship that Jim Maurer will be leaving. Linda Wang, currently of the University of the Pacific in Stockton, Calif., played a short program which included the Brahms Sonatensatz, the fugue from the Bach C major Sonata and the Sarasate Carmen Variations. She played with ease and poise, showing depth with the Bach and nailing all the insane technique in the Carmen variations. She seemed happy to be playing, and when she gave a masterclass directly afterwards, she seemed happy to be teaching. She listened to a student's rather ponderous Bach Chaconne, and told her in a sympathetic and smiling manner that "You're kind of looking at every tree in the forest," then she proceeded to help her find a new vantage.

But this was not the only fine violinist I heard at DU today; in the evening, Jim and Jackie took me to see Vadim Repin in recital with pianist Nikolai Lugansky in the 1,000-seat Gates Auditorium. 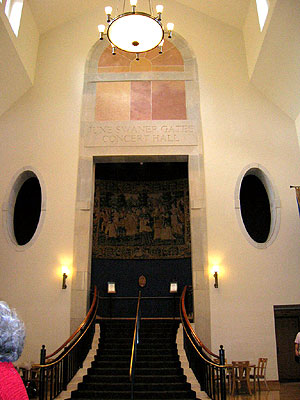 Again, I was impressed by the hall itself, a grand place with burgundy seats and wooden balconies, with wooden panels placed for maximum acoustic efficiency. Even the paint on the walls of this hall was applied with acoustics in mind, a brownish, metallic, non-porous paint designed to bounce sound rather than absorb it.

I'd never heard Vadim Repin, the Siberian-born advocate of new music. He had a bold presence, taking the stage to play. He began the program with the Bartok Rhapsodie for Violin and Piano, then played the Schubert Fantasia, the first note of which was quite arresting. There was such a stillness to it, a true contrast to the trickling notes of the piano part, with all its trills and motion. When the tempo speeded up for the second movement, everything was so satisfyingly in sync, with the violin and piano definitely in dialogue.

After the intermission, Repin announced that his part for the scheduled "Fratres" by Arvo Part was lost (somewhere in the Baltic Sea, he joked) and so we must settle for the Bartok Rumanian Folk Dances, which everyone seemed happy to do. One hears this piece played so often as a student piece; Repin confirmed that it is a piece of art. He played it with elegance and nuance. The dreaded movement of all harmonics came off like the ghost it surely was intended to be, completely transparent and without a trace of that base note peeking through. The last movement was very bouncy, a great wild ride.

The Franck Sonata followed. Repin played the piece from memory, and pianist Lugansky played with wonderful energy. This piece requires so much ebb and flow, and they achieved it. I noticed, in the last movement, that Repin can make an awful lot of use out of very little bow, yet he also has great ease in using full bows.

In the last movement Repin and Lugansky together nailed every tiny complexity of rhythm, to wonderful effect. The rhythmic drive and precision made it so satisfying to hear. The audience rose to its feet immediately after the Franck, and Jackie leaned over to let me know, "They never give a standing ovation! This is rare!"

I'll have more to write about Jim and his career soon. But for tonight, here's one tip: Put the University of Denver on your map, everyone!

For me, repin and ehnes are the best soloists out there. What a treat it is to be able to see and hear either one of them play!

From Ben Clapton
Posted on March 30, 2006 at 2:56 PM
I wouldn't have considered Denver to be an extreemly musical town, but I shall definately consider it when looking to study overseas (if I ever get to that level).
From parmeeta bhogal
Posted on March 30, 2006 at 4:09 PM
The does look really "swish"..my daughter came in form her music class, looked over my shoulder, and declared:" well, thats where I am going"..at which her (so clever) mum replied, "so you can start practising..." Seriously though, I think looking at the type of places that you could go study if you are good enough is real inspiration at her age.
From Danielle Gauthier
Posted on March 30, 2006 at 8:57 PM
DU's music school is definitely up there...I think that the string faculty performed for my school...or was that CU?

What'd you think of Denver?

From Rachel Massey
Posted on March 30, 2006 at 11:38 PM
Wow Laurie, sounds like you had a great time visiting DU. I actually attended Lamont for two years for undergrad and was the first class to be in the new building. I have to admit that I certainly loved the gorgeous halls and practice rooms, but in my time there it seemed like the faculty was more focused on its new facility rather than the music going on inside. It sounds like the school's evolving past that, which is certainly a good thing since there are so many wonderful faculty members (Mr. Maurer ad the top of the list). However, anyone who has ever been to Julliard or New England Conservatory will say that it is not the building that makes the school.

In any case, I hope for the best for DU's Lamont School of Music, and am very curious as to who the new chair of the string deparment will be.