I think that the younger you give children a basis for understanding classical music, the better. It's like reserving a little space in their brains, someplace where they carefully will store anything they discover in the future about the topic.

This is one reason why I'm thrilled that the first-grade teacher at my kids' school asks me every year to help her teach a unit on classical music, even though neither of my kids currently is in her class. If it helps these kids lay a foundation for appreciating classical music, I'm a very happy musician.

Today she wanted me to talk about Baroque music, as she had taught them about Vivaldi, Handel and Bach. 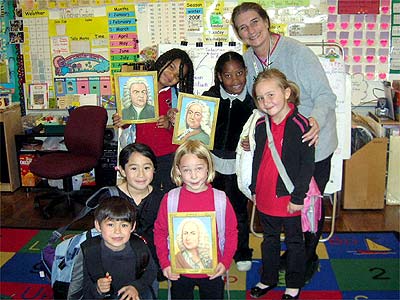 I brought in the Gagliano violin I've been borrowing and informed them that it was actually a rather enchanted violin, that I don't even know what has been played on it because it's 150 years old, older than my grandmother, and great grandmother and great-great grandmother.

I played a bit of "Spring" by Vivaldi, since they had been informed that The Four Seasons was one of his most famous works. I also played a little of the last movement of the a minor concerto, many will know it as the fifth piece in Suzuki Book 5.

Then I decided to give a shot at teaching them the concept of Baroque ornamentation.

"Let's all say 'ornamentation,'" I instructed. After they said it, I asked, "So what is an ornament?"

A boy raised his hand, "It's a decoration on a Christmas tree!"

"Exactly," I agreed. "And just like you can make a plain Christmas tree fancy with ornaments, you can also make music fancy with musical ornaments."

"This," I said, "Is the plain green Christmas tree with no ornaments on it."

I played the beginning of the Vivaldi A minor last movement.

"And this is what it's like with ornaments on it,"

So I skipped to m.30, the fancy version of the beginning, and just played a few measures.

I think they understood! I did it again. "See, so here's the plain tree again. And...here's the one with ornaments."

Seeing my opening, I thought I'd take a shot at "bariolage," and I played the first page of the Bach E major Partita, with all its fancy string crossings. "Now everyone say the word, 'fugue,'" I continued, explaining that it's pretty amazing to be able to have three different voices sing three different things at the same time on the violin, but Bach was an amazing guy. I played a bit of the fugue from the C minor Sonata. Mrs. Walker had already taught them the word "melody," so I just separated out the voices to show them all that was going on at once.

What good kids these were!

They wanted to take a look at all those black dots on the page, and fortunately I had my Bach with the original manuscript copy in the back.

"So this is actually Bach's writing," I explained. "Do you know why he wrote so much all on one page?"

I think every single one of those 20 kids took a stab at that one, and I was inwardly amused that no one got it right. Scarcity is not that common a concept to these kids, sweet as they are.

"They just didn't have very much paper back then. They had to really use what they had!" I explained. Then I read what it says on the inside of my book:

"After Bach's death, much of his glorious music was neglected, even forgotten. The manuscript of the six sonatas and partitas for solo violin, in fact, was discovered in 1814 in St. Petersburg among a stack of old paper destined to be used as wrappings in a butter shop."

"That means," I explained, "That they were going to take it and use it to wrap butter in."

I guess our most beloved music, even the most powerful work of a genius mind, has always held to the real world with a tenuous grasp.

May these children grow up and not relegate it to butter wrap!

From Karin Lin
Posted on March 17, 2006 at 7:21 AM
Thanks for sharing this story, Laurie...I loved it! It's so wonderful that you could provide the kids with that live exposure. I especially like the demonstration of ornamentation.

What were some of the answers to your Bach question?

Yes, I had many of the same thoughts. What would the world be without the Chaconne? And, were there really 12 Sonatas and Partitas? The others all made into butter wrap! OH DEAR!

From Jim W. Miller
Posted on March 18, 2006 at 5:39 AM
Bach manuscripts were in high demand for butter wrapping in the late 18th century. Bach usually used a thick slick finished paper which luckily had excellent butter wrapping qualities. His manuscripts fetched premium prices in the butter wrapping paper markets of the day and there seemed to be an endless supply.
From Pauline Lerner
Posted on March 18, 2006 at 8:42 AM
The kids and the teacher are beautiful. So are you and the underdstanding of music you bring to them. Your demo of ornamentation is a great way to teach the spirit of the music. If we don't bring understanding and love of classical music to kids, Bach's manuscripts may once again be used to wrap butter.

Last night I played in an outreach concert to a group of elementary school kids and their parents. It was not in a wealthy part of town. Other members of the audience included the principal and a janitor or two. Our conductor is also a gifted teacher and he did a great job of everything. I hope we have saved some souls this way.

Jim, you clown, thanks for making me laugh. Speaking as a former employee of the Food and Drug Administration, I can assure you that manuscripts could not be used legally to wrap butter today. Someone would have to prove that nothing toxic in the ink migrated into the butter and, from there, into the consumer's body.