'An intimate evening with' ...Midori's students 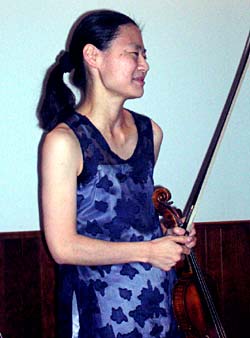 The show, billed "An Intimate Evening with Midori Goto," was for about 75 University of Southern California faculty and staff, held at University Club. Since Robert is on staff at USC, he invited me to go with him.

When we arrived, I looked at the program.

"An Intimate Evening of Mozart," it said. I smiled. The change in title was not lost on me. Performing was the USC Graduate Quartet, with violinist Daphne Wang, Professor Midori Goto, Violist Laura Pearson and cellist Anna Cho. They would play Mozart's K 465 "Dissonance" Quartet, the late quartet dedicated to Haydn.

Before the quartet entered the room, Dean Robert Cutietta of the Thornton School of Music at USC introduced Midori as a great soloist who turned out to be a great teacher. It all began when she gave a master class at USC five years ago.

"It was very clear at that moment she was not the typical guest artist, who does a master class just because she has to," said Cutietta. "She was totally tuned into the students. It very clear that what she needed to be was a teacher."

When the school's Jascha Heifetz Chair in Violin opened, "It was almost a no-brainer that it would go to Midori." Midori is now in her third year at USC, and her first as full-time faculty.

"She is so dedicated to the students," Cutietta said. "It's not about her, it's completely about the students. It's unbelievable to see the energy she has brought to this school."

"Here we call her Professor Goto," Cutietta said. Then he whispered, "Now I present, 'Midori'!"

But it was clear to me that this was Professor Goto walking onto the stage, and that she was fully in the act of teaching her students at the moment. I had situated myself right in the front row, in perfect view of the chair set up for the first violinist. But I knew as soon as she walked in; Professor Goto would be playing second violin, allowing her students to take the lead.

Each member of the quartet explained one movement of the piece they were to play. Violinist Wang told us that Mozart referred to his final quartets as being written for himself and for a small group of connoisseurs, as long as they kept the music in their own hands. The group demonstrated how the first movement's Allegro bursts forth, in happy relief, from the dissonant and wistful Adagio.

Midori said of the second movement, "I think it's one of the most beautiful movements Mozart wrote for string quartet." Cellist Anna Cho challenged the audience to imagine dancing to the mercurial third-movement minuet, and Violist Laura Pearson talked about the Finale and "the surprises Mozart plants in our paths." 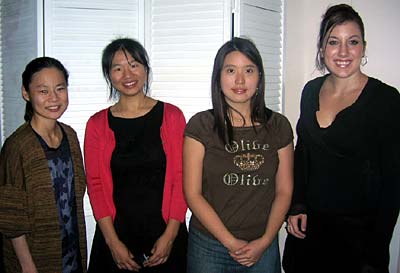 The students' thoughtful analysis and clear communication was not due to good luck; Midori had required the students to analyze, research, compose scripts and write program notes. Indeed, it set the stage for an informed, and thus more enjoyable, listening experience.

Their playing was equally charged with the kind of spontaneity that comes with knowledge and preparation.

Midori sat in the middle, small of frame and huge in presence. I decided that Midori is made of musical molecules, at least during the moments she is playing. One lovely moment came at a rather quiet spot in the second movement, in the way Midori pronounced an inner dissonant note, one that changes the face of what's going on in the music. It wasn't an accent, but something so much more subtle.

I'm sure it's thrilling, just to "play with Midori," to be on stage with someone so accomplished and famous. But far more thrilling has to be this: to make music on the level that she was drawing out of them. Their playing was absolutely intense. They knew when inner voices spoke in unison, and they did so absolutely together. The octaves between the first violin and viola were beautifully in tune. They played the second movement with enough restraint to allow themes to emerge out of each other, in all voices. Wang nailed the really fast "simple" patterns in the fourth movement, patterns that are actually so much harder to play cleanly than anything in a Wieniawski concerto.

After their performance, Midori stressed that "it's important for music schools to engage students to go out into their communities, to develop more closeness with their audience." This is one reason why Midori established the Midori Center for Community Engagement: to teach musicians how to advocate for music.

The foursome will present the same program again at noon, Nov. 28 at USC's Fisher Gallery.

November 14, 2006 at 05:46 PM · What a wonderful experience, Laurie. Thanks for sharing. PS - Midori wore that same dress when she performed the Britten with the San Francisco Symphony a few weeks ago. :)

November 14, 2006 at 07:52 PM · i believe that communal engagement in music is something desperately needed where i live. [or maybe i'm just desperate:*)] i love prgms that have that way of presenting some inner working of the music or some piece of history related to it. the music festival, "ClefWorks", being prepared here (Montgomery, AL.)will offer some of this i'm sure, and i just hope it entices any kind of response that allows for more opportunity and greater involvement (viz. our volunteer orchestra is almost exclusively comprised of septuagenarians or later...what's going to happen here?) perhaps something 'great' might come of the fes...or just a step in the right direction-

it's all one can ask for~

i enjoyed this blog

November 14, 2006 at 08:43 PM · I think Midori is not just a great player, she is totally dedicated to her art and teaching. Isn't it wonderful the way she describes greatness ? Thank you Laurie for sharing this with us.

November 15, 2006 at 08:03 AM · That would have been great. I'd have liked to have heard what Laura said about "surprises in Mozart." When I had to take a test once I had trouble telling Haydn from Mozart. I came up with two ways that worked for me. First, strung-together syncopations, but second, you can't tell where Mozart is going, even a few notes ahead, and you can with Haydn. If you can tell where Mozart is going, you've heard it before. In later years I recognized another way, involving a cliche he ends phrases with occasionally. An example occurs in the Sinfonia Concertante. I've always wondered where it came from, and if maybe something was even sneakily encoded in it.

I remember when Midori was a little kid. Impossible, since I'm only 25.

November 15, 2006 at 03:45 PM · You're absolutely right !!! Playing Mozart requires much more from you as a violinist than Wieniawski. Thanks for sharing the Midori concert with us. You write beautifully with nuances that only a violinist would know how to phrase.

What about the element of surprise in his 94th symphony? :P

Thanks for sharing! I loved it!

November 15, 2006 at 11:49 PM · When I hear that I always jump out of my seat and look around, just for authenticity. Especially if they're using original instruments.

Great story Laurie. Midori's Mendelssohn remains one of my favourite CDs and it was an honour to see her performing a chamber recital in Santa Cruz earlier this year.

PS. Some parts of this post may contain factual falsehoods. ;)

November 16, 2006 at 05:42 PM · Ooh, how wonderful, everything you've written. Midori is such a mesmerizing musician to observe and listen to. Feel like I just got the chance again, reading this.