A day with William Starr

January 21, 2006, 12:47 AM · A tiny girl in a pretty dress stands up before a large audience at a master class. She raises her small violin to her shoulder and lifts the bow to the string, preparing to play in perfect form.

She then plays Twinkle with every note out of tune.

After for praising her positioning and thanking her for playing for such a tremendous crowd, Suzuki pedagogue William Starr crouches down behind her scroll and says,

"Susie, I'm George, the third finger. Did I go down on the tape?"

"Well, would you watch us?" Starr says. "If you watch us, we promise to go down on the tapes!"

Susie plays it again, this time concentrating on her fingers, and every note is perfectly in tune. But Starr doesn't heap on the praise. Instead, he crouches down again,

"Oh come on! Don't you think we did better than that?" Starr asks.

Starr shared this story last Sunday with a group of about 20 Suzuki teachers at a workshop at Lonie Bosserman's studio in Orange County, Calif. He was speaking about how to help students become their own teachers.

I agree with Starr about who is in charge of Susie's fingers: it's Susie. Sometimes this gets lost in the"Suzuki triangle," which includes at its points the student, teacher and parent. The parent is considered the "home" teacher, which is certainly helpful in teaching very young children. But with both the parent and teacher instructing the student, the student can become disengaged.

"I don't like the Suzuki triangle," he said, challenging one of those core Suzuki beliefs while still embracing it. "We Western teachers need to develop the creative abilities of our students and teach them to be their own teachers."

Starr has both challenged and embraced the beloved Suzuki method since the 1960s, when his family went to Japan to study with Shinichi Suzuki. He was a close friend of Suzuki's; he spoke at his Memorial Service in 1998. Starr and his wife, Constance, have eight children and all of them were raised playing instruments, learning with the Suzuki method. Starr currently teaches at the University of Colorado in Boulder. (When I saw him on Sunday, I could not resist bringing a program from Colorado All-State Orchestra, 1982, in which he was conducting and I was a member of the first fiddles!) 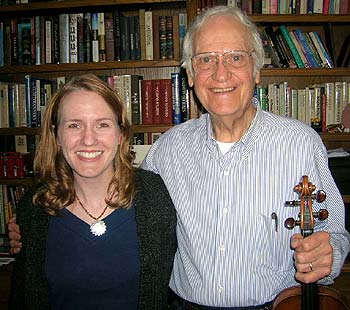 Starr might be a believer in Suzuki's philosophy, but he's also a man of his own ideals. At once a violinist, teacher, conductor, composer and teacher trainer, Starr has had a profound influence on the Suzuki movement. In particular, he has contributed significantly to improving Suzuki teachers' ability and willingness to teach music reading.

The Suzuki method, which relies heavily in the beginning on rote learning, was criticized (and still is) for a deficiency in teaching children to read music. Starr has done much to change that.

Not only has he been an advocate for the teaching of music reading, but he and Constance Starr also have written much of the literature Suzuki teachers use for teaching it.

Among the arrangements Starr wrote are Adventures in Music Reading, 77 Variations on Suzuki Melodies, Delightful Duets, Rounds and Canons, Strings Around the World Folk Songs of the USA, Taka Taka Polka and Twenty Six Composers Teach the Violinist. He also wrote several important books about the Suzuki method, including "To Learn With Love," written with his wife, and "The Suzuki Violinist."

"I didn't bring out my books for years," Starr said. "I didn't know how to do it, how it would be received. I realized, though, we've got to teach them some theory."

Starr admits that he is as disturbed as any traditional teacher by a student who can play a fantastic Vivaldi concerto, but who cannot read music. Repetition, he realized, is the key to good reading.

"You don't read much, you just recognize," Starr said. "The key to learning reading is to build a huge memory bank of musical patterns."

Most recently, Starr bought a biofeedback machine to help him figure out how much energy the body uses for certain motions used in violin playing. He found out that playing the "motorcycle stop-stop" rhythm with only the weight of the bow takes 15 to 30 microvolts, while playing the same rhythm while pressing hard on the pinkie and thumb takes 60 or more microvolts.

"Basically it takes twice as much energy for a bad tone," he said. So one of his recent projects is to determine the most relaxed way to play the violin, and to teach it from the beginning.

"Dorothy Delay said, 'It doesn't take much energy to play the violin,'" Starr said. He also told a story of a child asking Itzaak Perlman, "What do you think about when you practice?" Perlman responded with one word: "Relax!"

Based on his biofeedback experiments, he is throwing out some of the early bowing exercises for the small children like "Up Like a Rocket," because they use about 90 micrvolts of energy in the fingers, which is very high.

One of the reasons I wanted to see Starr is that I never did get to meet Shinichi Suzuki, and he is someone who knew him well. His stories about Suzuki confirmed once again for me that Suzuki was an innovator, and that we should be, too. We should not be afraid to be shaped by our experiences and our environment, and to follow our instincts.

One lovely image Starr left me was of Suzuki, during the days when he was courting his soon-to-be wife, Waltraud. When they married, he told her, they would move to Switzerland. Waltraud spoke German, and Suzuki spoke Japanese. His love letters to her were postcards. There was no Japanese, no German; he just drew pictures of the mountains. Their dream together.

They never did make it to Switzerland, for all the woe the world was going through during those years. But I could see the grain of his idea in those pictures. When he dropped his bow during quartet rehearsal and said in amazement, "All Japanese children speak Japanese!" he did so because of his struggle to learn German, and Waltraud's struggle to learn Japanese. The members of his quartet put their instruments down and talked for three hours after his statement. If all children, all children, can learn their mother tongue, what else can all children learn?

Many years and thousands of students later, Suzuki's faith in children and their potential remained unshaken.

"Once you start using your imagination," Starr said, "you will start coming up with all kinds of clever ways to get in the back door of children's imaginations."

January 22, 2006 at 11:53 PM · Our mentors from our earlier years always mean so much to us. I have a framed photo of my childhood violin teacher in a place where you can see it as you enter my home. People often ask me whether it's a photo of my father.

I'm glad that you made the point about the need for new ideas, new ways to do things, and trusting our intuition. There are important cultural difference between Japan, especially during the time that Dr. Suzuki was developing his methods, and the time and place in which we live. I've read Dr. Suzuki's book Nurtured by Love, and that really helped me understand where he was coming from.

I knew about Dr. Suzuki's revolutionary concept that all Japanese children speak Japanese, but I'm glad that you told us the story behind it.

I have read William Starr's book The Suzuki Violinist, and I found it very interesting, easy to follow, and enlightening. I'd like to read some more of his books. Can you tell us some more about them, maybe even give us some recommendations? It sounds like William Starr is very talented in the way he interacts with kids, as well as in his ability to write.

January 24, 2006 at 07:38 AM · Actually, the only books I know of are those two, and I've not read "The Suzuki Violinist." I did read "To Learn With Love" and really enjoyed it! The Starrs share a lot about their experiences with their family, etc. I would definitely recommend it.