I had this thought about six months ago, when I was watching piano teacher/incredible lady Fritzie Culick work with Brian, who was then four.

“Oh, I don't need to get my camera out and take a picture of this,” I thought to myself. “She teaches him every week!”

Nonetheless, as I sat behind this pair, I stopped taking notes for a moment,. I wanted to take in the whole scene. There was little Brian, sitting straight up, this posture being achieved through Fritzie's great persistence. The piano bench sat as high as it possibly went, to hoist Brian's small hands to the keys. His fidgety legs resisted the stool set there for them to rest on; they were at least two feet off the floor and tended to dangle. He played part of the French Children's Song, yanked his hands from the keys, then spun around to Fritzie, flashing her a dimply smile. “When you get there, you go right back to the beginning. 'Da capo'!” she explained, placing her hand on his disheveled bedhead. “It means 'from the head'!” He put his little hand on his head and grinned. 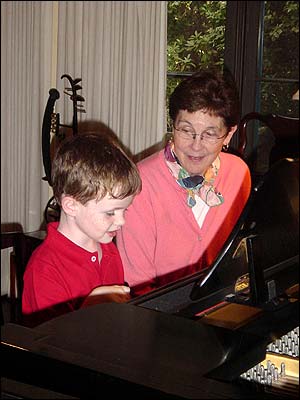 A few weeks ago, Fritzie made a decision that had some implications for Brian, and for me: she decided to retire from teaching. The reasons for this were so clear, she did not even have to explain. She owns Old Town Music Store , serves on the board of directors for Southwest Chamber Music and is the accompanist for STEP , the Suzuki group I teach in. She is one busy lady! Still, she was genuinely sad at imparting this news. There is just no doubt she and Brian have a special relationship!

I set about making arrangements for a new teacher. And when I had talked with the new teacher (for two hours!) and made that decision, we told Brian.

“That's fine, because I don't want to play the piano any more,” said the boy who has practiced every morning for 65 days in a row. He stewed, for a minute. Then he smiled, “Just kidding!”

Today was Brian's last lesson with Fritzie. Beforehand we went to the grocery store, where he picked out a big pot that was thick with yellow and orange-tinged chrysanthemums for her. When we arrived at Fritzie's house, Brian looked like a small, walking pot of mums as he carried them to her door. He wasn't over this feeling of being jilted, though. Throughout the lesson, he occasionally banged out his songs with uncharacteristic ferocity. But we left her house smiling and laughing, and we know Fritzie is not out of our lives.

Really, come what may, she never will be. She'll always be the person who first helped him tap his little fingers, who showed him which one was “one” and which was “five.” She's the one who taught him to hold his hand like a “turtle house” and brought out a little ceramic turtle to show what she meant. She's the one who first made him play “Twinkle” and say, “I can do a high jump!” Her beautiful home is the first place he ever played for anyone, at what she so thoughtfully called a “play party,” not a “recital.”

Maybe when he is 18 he will open his piano book and see the epic picture Fritzie drew of Aunt Rhody's pond, the one in which that poor old gray goose expired. I just loved that she never gave us the white-washed words to sing with that song. For us, Aunt Rhody's goose “died in the Mill pond, standing on his head!” and there it is, in colored markers, upside down in the pond, with x's for eyes!

When he learned “Au Claire de la Lune,” she wrote in the French words for the song, then she explained them patiently to four-year-old Brian.

So we will take with us her attention to detail, her humor, her sophistication, and her great energy. Thank you so much, Fritzie!