For Parents: Practicing 21 Days in a Row Forms the Habit!

He had practiced 15 days in a row! Actually, I was the one dying to tell her.

Though we'd like Brian to feel that he shares some responsibility in this, it's really up to me to see that it happens.

The 15-day streak comes after quite a few months of less-than-stellar effort by me to get him to practice. That's because the habit was not formed in the very beginning, last fall, when Brian fell madly in love with the piano. He and the piano had a tremendous honeymoon. He would tickle the ivories for 45 minutes straight, sometimes several times a day. He did not even need me in the room. He was learning songs from the end of Suzuki Book 1, with both hands! It was quite amazing. And I was completely satisfied that my boy was such an enthusiastic whiz-kid that he would be forever self-motivated.

The honeymoon ended. He became resistant about playing the piano, especially when I asked him to. He refused to play “Little Playmates” with both hands to impress friends. He stopped using his left hand all together.

Fritzie, his wise teacher, said, “I'm not surprised, really. That left-hand work was a little beyond him. Don't worry about it.”

Several weeks ago we attended the Southern California Suzuki Institute, in Eagle Rock, one suburb away from where we live. I thought this would boost Brian's enthusiasm. He was excited for it.

He had a wonderful teacher, Barbara Shepherd of Indianapolis. She was full of calm, grace, and lessons in breathing. Brian took it quite seriously. In fact, she had him in a trance. She had him walk to the bench slowly, which is not always in the nature of five-year-old boys.

“Walk Largo,” she gently insisted. And he did. Then he sat on the bench and took three silent breaths before putting his hands to the keyboard to play, “Go Tell Aunt Rhody.” Wow! 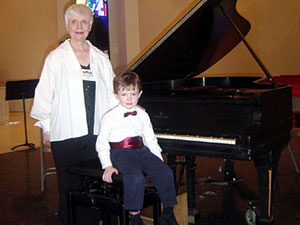 “Now,” she directed at me. “Have him listen to Go Tell Aunt Rhody 25 times. Then scramble the phrases and practice it that way. Then go over those five notes with the skip at the end...”

“Um,” I said, feeling a little worried. “He pretty much does not want me to practice with him. Actually, it's been hard to get him to practice at all...”

“Really,” she said, arching an eyebrow. “Do you practice at the same time every day?”

“Well,” I said, “No....” Since his lesson was last and the other kids and parents had left to make their next class, I had a little time with Mrs. Shepherd. I started explaining how neurotic I feel about being a musician, a Suzuki teacher, and making my kids play. You know, the potential to traumatize them for life, or maybe even kill them, like that poor kid with the metronome in the Red Violin.

“Now don't you worry about any of that,” Mrs. Shepherd said. “You know, it takes 21 days to form a habit. But they have to be days in a row. If you miss a day, you have to start again. So practice for 21 days in a row. Set a time, stick to it. Get him out of bed in the morning and do it before breakfast. Have you been listening to the Suzuki tapes?”

“Well then you are expecting him to learn French without being immersed in it!” Mrs. Shepherd said. “How would you feel if you had to go to Paris next week and you'd barely heard a word of French? You are asking him to speak French without speaking it in the house. Listen four hours a day.

“Now you are going to hear all kinds of things coming out of that piano. Songs from the end of the book. Left hand, right hand, things that are beyond what he is doing. Don't go calling Grandma to tell her about it! Just ignore it. Let him play, let him have fun with it, but be sure to work on the current pieces and the review. If it doesn't go well some days, not a word. No guilt trips, no scolding. Just go get breakfast and turn on the tape.”

I couldn't let down Mrs. Shepherd after all that. So I went out that day and got a practice record book and some stickers. The next morning I got up early, then went to get Brian at 7 a.m. “Time to practice!” I said. “Shall I carry you like a little froggy?” Then I carried him downstairs to the piano, where he resisted a bit, but then practiced.

Fifteen days down, six more until “a habit is formed.” After that... he only has to practice on the days he eats!

August 4, 2005 at 10:13 AM · Becoming a parent and having children is the most fulfilling of all things in life, good for you Laurie... sounds like youre having fun at it too

August 4, 2005 at 11:01 PM · I just watched and listened to the video. Brian is adorable and he plays Go Tell Aunt Rhodie so well. You have evry right to be a proud parent.

August 4, 2005 at 11:35 PM · That's a big YAY for Brian. Me & my son were sitting on the right side of Chapel during the performance/demostration. Its good to hear the parent side of the stories especially from a parent/teacher's point of perspective. This is the first time we attend the SCSI & we had such great fun learning, meeting people & parents & going to concerts. My son was lucky to play in the Solo Recital & so nice to see all the young musicians giving the gift of music. Keep up the good work & may be we'll see you next year

September 4, 2005 at 09:41 AM · Wow. 21 days to form a habit. What a great tip. Imagine what that implys about the work we do with PreTwinkle Children or very beginners of any age.