It was only my second date. But after last night, I'm completely in love.

Few have ever treated me so well: given me the room I needed to breathe, listened to me, heard me, made my life so easy and pleasant. 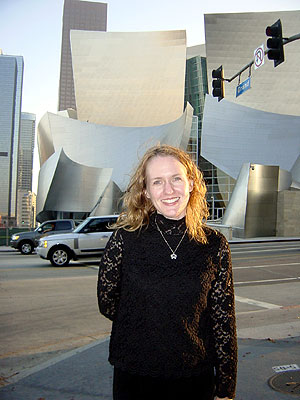 I had an inkling of this on my first encounter with Disney, which was altogether too brief. The violin section audition I took for the LA Philharmonic last year was held there, and the experience was astonishingly enjoyable. I had a beautiful little private warm-up room, my fingers stayed toasty warm right until I walked into the hall; then the hall was beautiful, with its colorful seats and new wooden floor. The room where everyone fretted afterwards was lined with comfy couches and pleasant art, and then when I was dismissed, I got to walk around outside, musing at all the gleaming curves and angles of the building's exterior. How could I even feel glum, with all that metal beaming so happily at me?

Last night I found the same bright friend waiting for me on the street corner, that happy edifice I met a year ago.

It was a lovely function, a benefit concert for the Koreatown Youth and Community Center , in celebration of its 30th anniversary. The group works to improve LA's Koreatown community, especially for recent immigrants and those who are economically disadvantaged.

The concert was impressive, featuring violinist Alyssa Park playing Tzigane. Also there were three choirs singing the last movement of Beethoven 9, as well as other impressive young soloists: pianist Hyo-Sun Lim and counter-tenor Jeffrey Kim—1st and 2nd Place winners from the Korean International Music Foundation’s 2005 Competition. I was part of the “Korean American Symphony,” with conductor was Jong-Hoon Bae. He joked that he was the Korean and we were the Americans!

On Thursday I breezed through LA with barely any traffic trouble on my way to the hall. Parking was easy to find, and the elevator went straight to where I needed to be. After checking in with security, I made myself at home backstage.

My first thought: everything about “backstage” is huge. I've played in so many halls where the backstage area is an afterthought; one climbs up or down some tiny, steep stairwell into a cramped little space full of sharp and oddly-shaped stage implements. Where does the fiddle go? Maybe there's a table where everyone can try to fit their cases sideways, but if you are not first to get there, you may have to put it on the floor. In one hall, I put my fiddle case in a place where people would not trip over it, then when I stood up, I actually banged my head on a pipe! Often everything is so badly lit, one has to be constantly on the alert to avoid tripping on various strange protrusions and equipment. In another hall I played in, there was no ramp for people with disabilities, so Itzaak Perlman, as well as anyone who needed a ramp, had to suffer being hoisted into the backstage area.

Disney Hall gives a performer dignity from the moment one walks in the stage door. It is light, not dark. Heck, there are lounges with windows! As I walked in, a violist was musing over a very large piece of stage equipment that was positioned near the orchestra lounge. It clearly sat in its own special designated place, marked on the floor with yellow paint, as if to say, “Excuse me, but I need to stand here. Do kindly please step around,” and there was copious space for stepping around.

Encased in glass is the orchestra lounge, a spacious place with four large windows overlooking a pleasant curve in the street, trees and a water fountain outside. The lounge has a wall of wooden bookshelves, stocked with an odd assortment of used books, from “Princess Daisy” to parenting books. I suspect a casual arrangement of book lending. There are cozy chairs, lots of tables, and people talking on cell phones while staring out the window. A small room with vending machines stands next to the lounge, with a snack machine that takes 10-dollar bills And of course there is a water cooler, along with about 25 huge water jugs in reserve.

Through heavy doors is an inner area that is closer to stage, where people set their instruments. I noticed, along the back wall of this area, was a very long, rather stylized shelf just wide enough for a fiddle case. And, there were plenty of tables for cases as well.

So, after removing my violin from its case without having to stoop to the floor, I held my head high (without banging it on a metal pipe) and walked into the hall.

How small it seemed! Yet, how spacious.

Being in the middle of the second fiddles, I was situated on one of the risers. But I did not feel perched, as I have in many situations. Often, orchestra risers are clumsily built, and of inadequate size. One feels precarious, as if any scooching back or sideways will pitch one's chair fatally to the floor below. The risers at Disney felt completely organic, situating the musicians in one big hollow that felt intimate. I could clearly see everyone around me, and the sightline to the conductor was superb. At the same time, there was plenty of space; no awkward angles required to keep from impailing my stand partner's eyeball with the tip of my bow.

The Disney-style music stands, all blond wood with black legs, did their job, too: they tilted, went up, went down, had a special little place for the pencil. If this sounds like a silly thing to take note of, I'll add that I once had to have my lower lip stitched up at a hospital after a stubborn stand went flying into my face. I was standing over it, trying with all my might to bring it upward....

I took a deep breath and realized that even the ventilation was just right at Disney. Clean air, just the right temperature, and no feeling of hot lights frying my head. I don't wear contacts, but for some, hot stage lights dry them out.

But the biggest thing, the most wonderful thing....was the sound.

I'd been told that you can really hear yourself play in Disney Hall, that it is even disconcerting.

I loved it. I could hear myself play. Every note: the soft ones, the loud ones. If it was ever-so-out-of-tune, I could hear it. If the string was not quite speaking in a pianissimo passage, I could hear it. If I nailed every damned note, I could hear it. The nice thing about this is that one can adjust to a much greater degree, and to things more subtle. The concert opened with the William Tell Overture; not the “Lone Ranger” part, but the lovely beginning. The celli were completely audible, no doubling needed, no problem. Then, when it was time for the violins to come it, we were able to play so incredibly softly.

And while I was able to hear myself play, I felt like I could hear more of everyone else, too. Nothing seemed lost, the sounds I could hear were so articulate and detailed, and coming from every section.

“Tzigane” was well-suited for this hall, with its extended solo violin introduction. Alyssa Park really fired up her gypsy for this one. It seems that every violinist, even the finest ones, at some point get stuck in some undefined Ging mush when playing this piece, but she absolutely did not. It was completely clear, precise, calculated, and yet with the feeling of breaking loose.

Disney seems to accomodate sheer volume of sound as well as it upholds a quiet, single voice. The Ode To Joy was thrilling to hear there. And to play. I never felt like my part was lost in some loud morass. It was a wild ride, but one with vivid scenery, not a blur. At one point, I was counting out 16 bars of rest, and I just kind of melted, listening to what the choir was doing. So many voices, but all of them heard.

What a crazy project was Disney Hall. Designed by Frank Gehry, it took four years and $274 million to complete it. Lillian B. Disney, wife of the Walt Disney we all know, came up with this idea in 1987, when she made a $50 million gift toward the endeavor. It was a 16-year struggle to complete it. There were demands by the city for a parking garage, acoustical concerns, earthquake codes to meet, and a budget that soared far beyond orginal expectations. At times it seemed that it would never be built.

But it was, and the city of Los Angeles will benefit profoundly from it.

When I was getting directions to the hall, Robert said, “Yeah, just take the highway to Hill, then turn on Temple, then on Grand.”

I think this city has one now. A Grand Temple for music. An orchestra that inhabits this hall, especially one that is already as fine as the LA Phil, cannot help but grow. All the tiny, beautiful details add up, they make a place that can nurture music making, that can bring about new possibilities for musicians, as well as for music.

From Jim W. Miller
Posted on July 9, 2005 at 8:00 AM
I'm glad they decided against those mouse ears music stands.
From Carley Anderson
Posted on July 9, 2005 at 11:12 AM
Sounds beautiful, Laurie...nicely written. Lovely!
From Natasha Marsalli
Posted on July 9, 2005 at 11:43 AM
Enjoyed the reading. Thank you!
From Pauline Lerner
Posted on July 10, 2005 at 5:02 AM
Laurie, I can relate to so much of what you said about concert halls. I've had the same dismal experiences backstage, but your description made me laugh. I've also known the thrill of playing in a hall where you can hear yourself, the musicians near you, and the musicians farther away, all so clear and distinct and yet melding together so well. It's an exciting feeling, and we play better because of it. I like your photo, too.
From 'Erie Weber
Posted on July 11, 2005 at 2:41 PM
It sounds like a wonderful place (and like you had a very good time!). I'm especially delighted to see your mention of the ramp! I haven't played in too many "big" concert halls, but I must say, very few are truly "wheelchair accessible." When it comes to small halls... don't count on it! (It's even worse when the only stage entrance is on the audience side... I refuse to crawl or be carried up the stairs in front of an audience!!!). Granted, newly built or renovated buildings are legally required to have these things, but it's always nice to hear they actually do. :-) It's even nicer to know that thoughtful people like you take the time look outside of themselves, notice things like the presence or absence of a ramp, and think of the people that would be benefitted or hindered. Thanks, I enjoyed reading...
'Erie (-:
From Jen Horne
Posted on July 11, 2005 at 4:30 PM
Isn't it simply breathtaking? My choir flew from NJ to sing there. It was the experience of a lifetime indeed!
From Susan Jeter
Posted on July 11, 2005 at 4:56 PM
Laurie, Your post brought memories of when I was playing in a civic orchestra where one of our frequent venues was a hall in a local museum. The stage was small and wide but not very deep. As a result, our program featured a drawing of an orchestra in a sardine can!

Your description makes the Disney sound like a dream to play in. Thanks!