I'm finding my work at the Colorado Suzuki Institute to be quite exhausting, going to six classes a day (four observations and two pedagogy classes) and doing it all at nearly two miles above sea level. I found out that, at this altitude, I can get winded just playing the Bach Double!

In the morning I make my way down the hill with my violin on my shoulder and a heavy pack on my back, filled with music, a music stand, an umbrella for the possiblility of afternoon rain, an extra sweater, a notebook, camera, etc. etc. Then at lunch I climb up the mountain for a class, then back down...I'm beat!

But it is all so worth it.

I've seen many violin lessons, but one particular one really moved me. On Wednesday I was observing a Suzuki Book 2 master class given by Michele George of Cleveland. What a fine teacher, she was so very clear about the instructions she gave both the students and the parents. She would find one thing to work on and make both the parent and student zero in on that one thing. For example, a little girl named Jenna was working on keeping her bow thumb bent, breaking a habit of having it straight.

“Your mom is going to get a stiff neck, looking at your thumb. And you can't get mad at her for telling you about your bow thumb,” Michele told Jenna. “But that is the only thing she is allowed to talk about. She can't talk about posture, just your thumb.”

And it is true, we violin teachers tend to overwhelm a student with corrections, making it hard for them to concentrate on one thing.

What really moved me, though, was watching her work with a girl named Amanda Ransom, who has Down's Syndrome. Her sister is Amelia, whom I mentioned yesterday.

Amanda was working on getting her second finger higher in all her pieces, and she started by playing Lightly Row, a piece in Book 1. I noticed right away that she had a nice, fluid bow wrist, and that the music flowed nicely from her. She skipped a little part of the song, but it was in a logical place, and she did it without interrupting the music. Also, her second finger was in just the right place, as her teacher had requested.

After Amanda played, I noticed that Michele didn't mention the little memory slip, she just had her play it again, this time with Michele playing the duet part. This time Amanda remembered the little part she had left out, with no prompting.

“She responds better to the harmony,” Michele observed to Amanda's dad.

Next came “O Come Little Children,” which Amanda played with the same fluidity and musicality, but she put in a lot of double up bows that were not in the score.

“When you learned 'O Come Little Children,' you didn't know how to do slurs,” Michele said, to her, “So no slurs in it now!”

Amanda laughed. She tried it again, and this time Michele mimed the proper bow in the air, right above Amanda's bow. She still did a double up-bow.

“You really like those double up bows!” Michele said. Amanda's dad conceded that the double ups were rather ingrained.

“We are going to clap when you get it right!” Michele said.

So she tried playing “O Come Little Children” again, and when she got to the place with the bowing problem, Michele said, “Up down up, down up down...” but Amanda played it with the double up again. So they tried it again on the E.

Finally, after much work, Amanda did it right! Everyone in the room clapped.

“You will probably have to do that 18 times to get that straight,” Michele told Amanda.

“Perfect!” Amanda smiled, “I am almost that age!”

That was the moment when my heart was suddenly in my throat. Eighteen? It came to me how hard her parents and her teachers had worked with her, how hard she herself had worked, and for how long. 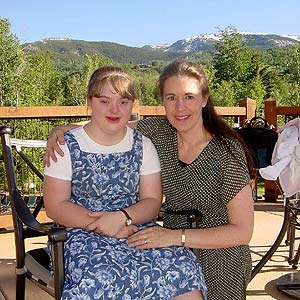 Amanda Ransom with her mother
In this short violin lesson, Michele gave Amanda the ultimate respect: she demanded something of her. Then she worked to make it happen, and she worked with patience and persistence. She had faith in her progress, and then the progress came.

One item of news from the Colorado Suzuki Institute: after 12 years in Snowmass, the Institute will move next year to Estes Park, Colo.

From K. S.
Posted on June 18, 2005 at 1:17 PM
Thanks, Laurie, for this beautiful and inspiring essay.
From Pauline Lerner
Posted on June 18, 2005 at 3:43 PM
Laurie, thanks so much for sharing with us so many wonderful things you've learned, especially because your schedule is busy and you are tired. I wish I could be there to see the teachers as they do so many wonderful things, and reading your blog is the next best thing. One theme that comes up over and over is to believe in each student's capabilities, show them that you believe, and watch them grow. It's almost like having religion.
From Ann Tan
Posted on June 19, 2005 at 3:17 PM
Dear Laurie,
Thanks for sharing. Am happy you are learning and having such a great experience. You wrote that the Institiute will be at Estes Park next year. Do you know why? Thank You
From Laurie Niles
Posted on July 3, 2005 at 5:14 PM
Ann, As I understand it, the Colorado Suzuki Institute is going to be in Estes next year so that they can have a more centralized place for classes. Currently, the classes require 25 minutes in between for people to climb all over the mountain and take buses to get to them! Also, teachers are required to teach in their condos, which doesn't allow for much privacy over the two-week period. And, there will be more housing options at a lower price range; Estes is more of a town, while Snowmass is pretty much a ski resort.