"Well, I have a little medical problem I need to take care of," said Susan, another second-grade Mom.

We were chatting as usual, waiting for our daughters by the front door of their elementary school. It's a new school, and our daughters were in its first kindergarten class, which began with literally with no classrooms, no playground equipment...just lot of faith. The parents in this class have bonded fiercely through three years of travails and triumphs at a new public school.

"I hope everything is okay?" I said to Susan, wondering mildly about her medical problem.

"I have breast cancer, and I have to schedule an operation."

"Oh Susan!" I said, and gave her a big hug before even thinking about it.

"I called today to schedule the operation," she explained, "and they couldn't find a pen so that they could give me an appointment because they have a new office. Couldn't find a PEN! I was ready to run over there and say, 'Look, HERE'S A PEN!' Then I realized this might not be the most constructive attitude."

Good Lord in Heaven, it's the attitude I would have had. No, I probably would have done it, would have torn over there in my car, red-faced and in the huff of my life, would have run inside and screamed, "I have CANCER, okay! Get it OUT OF ME! Here's the (insert expletive) PEN!"

Her little girl, Emily, who looks from certain angles just like my little girl, Natalie, ran up and hugged her mom. Susan put her finger to her lips, Emily did not know yet.

My own daughter hopped into the car and started poking at her little brother. Emily has a little brother, too, a two-year-old with curly red hair. They call him "pequeno John" because he likes to speak Spanish.

Cancer. If I could just take it away for her! Just how unfair, how frustrating, how upsetting. I have not spent tons of time with Susan, but I realized in that moment how much I've enjoyed her wonderfully wry humor, her intelligence, and the way she has helped the school so much.

What on Earth could I do for Susan? 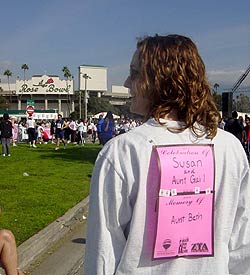 I decided she needed books that would not take her to overly dramatic places: the Jan Karon books, "The Power of Now." And music that would not plumb the depths of the human soul but would mercifully be beautiful without going to a dark place: Mozart. I put it in a bag. Then I threw in my soft blue hat. If one faces the possibility of losing one's hair, one needs a comfy hat.

When I saw her on Friday, she'd had a hair cut. She explained that her lovely hair dresser had cut it short, to make things easier if/when it fell out, and she had also offered to go wig shopping with her. Susan's operation is scheduled for Monday.

Today I did something I've done now three years in a row, I ran in the LA County Komen Race for the Cure, a fundraiser for breast cancer research. I set out at 7:30 a.m. with my friend, Libby, her baby, Caroline, and violin teacher friend, Julie Bamberger, for the Rose Bowl.

I want to let Susan know that I was joined by more than 10,000 people in rooting for her recovery. I want to tell my Aunt Gail, who has simultaneously faced the same situation as Susan in the last two weeks, the same thing. And I want to let my Uncle Mike and his 10 children know that I also ran in memory of his late wife and their mother, Beth, who died five years ago from this disease. 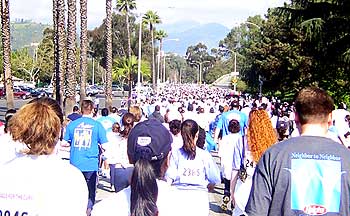 I wish they all could have seen this tremendous outpouring of support, honoring victims of breast cancer and celebrating its survivors. From the crest of the first hill, I was awed by the volume of people in this sea of humanity.

People participating in the run could wear pink sheets of paper, showing they were running either in memory or in celebration of someone. People literally wore on their shirts an entire range of emotions surrounding breast cancer: from triumphant to poignantly sad, from serious to barracks humor. One woman was wearing two signs, "In memory of Grandma," and below it, "In memory of Mom." The silly award goes to someone I passed, a tall man with white hair, wearing a blue shirt that said, "Men Have a Breasted Interest, Too!"

My favorite one, though, was this sign: "In celebration of...ME! Ten years!"

So here is the thought and the prayer that I'd like to put out into the world: that Susan and my Aunt Gail will be able to join me in running this next year. With a full head of their own hair, wearing signs that say: "In celebration of...ME!"

I hope for the best for your friend Susan and your aunt Gail. I will keep them in my mind and in my heart.

I just said a prayer for your friend.

From Kelsey Z.
Posted on February 28, 2005 at 10:35 PM
Prayers to your Aunt and friend. I've lost friends and family to cancer. May the three of you run together next year and win the battles your lives are throwing at you at this time.
From Inge S
Posted on February 28, 2005 at 11:21 PM
Prayers from my side too, Laurie. I went through this with my friend early this summer. She is a mother of two teen boys who are standing firmly by her, as are her friends. I find in her a new centred serenity, an appreciation of the smallest things in life, taking time to "smell the flowers", and focussing on what is important in her family and her art. There is light at the end of the tunnel, though it is sometimes hard to perceive. My best wishes to your friend, her family, and her friends surrounding her.
From Laurie Niles
Posted on March 1, 2005 at 5:52 AM
Thanks to everyone!
From Scott 68
Posted on March 3, 2005 at 2:16 PM
sorry thats so sad
From Gail Marvin
Posted on March 14, 2005 at 4:29 PM
Thanks to all for your kind thoughts...just a wee challenge that I WILL get through! I don't think God is done with me yet.
From Laurie Niles
Posted on April 6, 2005 at 4:50 PM
Thanks, Aunt Gail! We are rooting for you!