A Sprinkle of Fairy Dust, Plus a Dollop of Peg Dope

So many ghosts dwell in an empty music room. 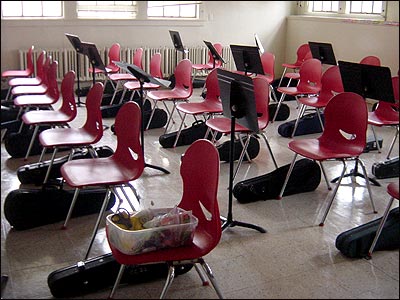 I met a number of them Friday, while volunteering at McKinley School, my children's school in Pasadena. Yes, my volunteer's job is a bit of an odd one -- I'm the....

The idea of organizing the class picnic, fundraiser or a bake sale makes me hyperventilate in terror. But tuning violins? Yes, I can do that. Really well!

The music teacher, Ms. Orlova, had told me, "It's hard, when I have a class of 39 kids, to tune all the violins. If we could just tune them once a week..."

So last Friday I went, for the second time, armed with my plastic shoebox full of fingerboard tape, scissors, peg dope, baby powder (to counter the peg dope), sponges, extra pegs, and a cleaning cloth.

Though tuning 40 violins did not actually seem quite as enticing as, say, taking the most advanced students and forming a chamber group, it might be more important for this teacher and this school, at this time. This public elementary/middle school was started only three years ago, and the music program is still getting its legs. But it all starts with these violins.

When I went in, I noticed that she was still using the fingerboard tape I bought for the school three years ago, and she'd kept the Blue Note jazz poster I'd laminated and donated back then.

I volunteered first thing in the morning, and after the children had settled into their classes, I found myself alone in a very quiet music room. Just me and forty violins.

I opened the first case. The child had not put the bow away properly, so it laid loosely over the violin, which was in fifths, though about a step low.

As I went from chair to chair, opening up the many violin cases, I found myself meeting many other silent personalities. For example, who decided to cut a bridge with the D and A strings so close together? What vigilante luthier (a wood-working father?) decided to replace the nut on a violin with some kind of scrap wood? Who put in an E string for a D string? Where was this violin before, that someone used masking tape instead of striping tape to mark the fingerboard?

The jury-rigging on some of these violins defied not only my sense of propriety, but also my understanding of physics. How on earth was such a frayed, way-too-short E string possibly still hanging on? Who lopped off the top of this bridge, and how is this violin still making a sound? How could four pegs be so different?

I fixed what I could, and though more remained to be done, I felt pleased. Won't some kid be just a little tickled to find that the violin that had no tapes on it now has four shiny new yellow ones, in just the right places? And won't someone be happy that the pegs now turn? Won't these strings stay in tune longer, with a D string for a D string?

The Violin Fairy is scheduled to come by every Friday. I hope to get all the fiddles in good working order over the next few weeks, so that all I have to do is come in and tune.

If every kid who is struggling to learn in this difficult setting has a working, in-tune violin, I hope it will make a difference. If nothing else, I hope it gives a very overworked teacher a break.

I wonder how many kids give up merely because it sounds so bad?

Conversely, it is amazing and beautiful to watch a child's face light up with utter joy at the sound of an instrument that works.

My son (8) came up with a novel idea at his birthday party: He made a "music" table where he put out a bunch of his instruments, for his friends to try. He had ukuleles, guitars, a mandolin, dulcimer, all kinds of percussion, concertinas etc. He also put out our charango--a small south american instrument that is small, fretted and has double courses.

Well, each child that tried instruments out, gravitated, after experimentation, to one of them more than the others. One child in particular, tried a few, and then he tried the charango (a real luthier made instrument---probably the best in out whole house). I watched him try it for the 1st time. He strummed it, and his face lit up--big smile.

When they all came back inside after the party games, he made a bee-line for that instrument....I doubt this would have happened had it been all out of tune and badly set-up.

And so, your efforts to fix up, tune up and set up those violins will do much more than the technical--you will enable real musical joy to blossom.

From Laurie Niles
Posted on November 7, 2005 at 4:30 PM
Thanks, Bill, I hope so!
From Charlie Caldwell
Posted on November 7, 2005 at 10:52 PM
that is very admirable.
From Sydney Menees
Posted on November 8, 2005 at 12:48 AM
You should buy some wings and wand... : )
From Jennifer Formhals
Posted on November 8, 2005 at 3:03 AM
I'm new to this "chat stuff"(& this web site)but I wanted to respond to "The violin fairy's" story. It's a blessing to any teacher to have a helper like that. A LOT of stuff can't get done when the teacher has to do it all-I can relate as I also helped form a group of talented 4th graders(last year)that was interested in playing a stringed instrument. Not having the privilege of an orchestra class through the school system, the music teacher & I started one during the summer & ended it at the end of the school year. We had about 18 violins, 1 cello & 1 viola. It was a lot of hard work, but it was wonderful to see them achieve at playing the violin! This year, there're 5 students who want to play for the Christmas program!(Now in 5th grade) Hopefully they will get the melody & harmony(A&B lines)and i'll fill in on the C line with my cello. Since working with the students at school, I now give a violin lesson to a 5th grade girl and a 1st grader-who I started last year in Jan. & she wanted to play the violin at the concert(2 mos. later) with the bow & did very well! She's playing again this year for the concert, with much better bowing & less "screeching" :) I'm really excited to teach her & I like to make them tell me if they're in tune or not. It's fun to see her face light up when she finally gets it in tune-& she's right on target most of the time!! So, my point of all this is to get involved helping the music teacher(if possible) the rewards of helping is beyond words! I've been tutoring 2nd-4th graders on keyboards for 5 years & sometimes it's the only time some children have the opportunity to try their musical abilities. Also, this has opened the door for me to teach piano lessons to 11 students! It's fun "work" overall and all the teacher's appreciate a person's help, no matter what it is. I'm glad to know there's other one's "out there" giving the gift of music to children-through helping, teaching or whatever. Keep on "keeping on", the efforts are well worth it!!
From Pauline Lerner
Posted on November 8, 2005 at 3:55 AM
God bless the violin fairy. She is doing good work.

I had an experience similar to Bill's. A large music store/school here sponsors petting zoos, in which kids can try out different instruments and see what they like. I helped on a volunteer basis earlier this year, and it was great fun. The kids were so eager to try the violins, and some of them got rerally excited when they held them and played a few notes. I decided that I wanted to do some volunteer work, as Laurie does, introducing classical music to kids in school. I've been stymied. The local public schools teach a standardized curriculum with no improvisations or variations because of the No Child Left Behind Act and standardized testing. I asked the mother of one of my students who goes to a private school about volunteering there, but they don't even have or want a music program. This is so sad. Does anyone have any suggestions about other ways I could help? I can't fly to California once a week to help Laurie.