Bringing Back the Music: New York Welcomes the Louisiana Philharmonic

Karen Sanno stood on a busy New York City sidewalk Friday afternoon, one half her worldly possessions in her hand. 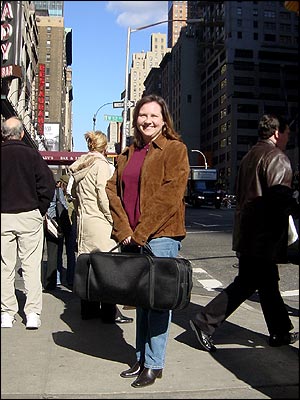 "It's bittersweet," the Louisiana Philharmonic violinist said. "I've lost everything, but I get to play in the New York Philharmonic tonight."

For many musicians, a New York debut represents a dream fulfilled. But a nightmare brought the members of the Louisiana Philharmonic to Avery Fisher Hall last night. Hurricane Katrina, and the subsequent New Orleans flood, left every member of the orchestra homeless, its season canceled, and the future of this musician-owned and operated symphony very much in doubt.

"We were on tour in Germany when the hurricane struck," New York Philharmonic violinist Fiona Simon said Friday night. "I think there was a certain resonance with 9/11. It is sort of a pathetic feeling to watch a disaster like this on CNN. We wanted to do something as an organization to help."

And so it did. The orchestra invited the LPO to Lincoln Center to share its stage, forgoing payment to perform a joint benefit to raise money for the LPO. Stagehands, airlines, hotel workers and tux shops donated time and merchandise to make the event happen.

"When you get the players in the New York Philharmonic giving, it sets the stage for a lot of other organizations to do this," Simon said. New Orleans' musical diaspora would come together again.

Opera legend Beverly Sills strode to a lectern, set at the edge of the Avery Fisher Hall stage. "A return to civilization is not just about bricks and water," said Sills, with the 130 musicians of the New York and Louisiana Philharmonics gathered behind her. "We also have to feed our souls."

Lorin Maazel opened the concert with Gershwin's noisy "Cuban Overture." Then a platoon of stagehands parted the violin section to make way for a grand piano. Broadway star Audra McDonald and songwriter Randy Newman emerged to join the orchestra for Newman's "I Think It's Going to Rain Today."

Then Newman, who, like most of the LPO members, was making his New York Phil debut, took his turn at the mic.

"Some people got lost in the flood, some got away all right," sang Newman. The lyrics of his 1974 piece "Louisiana 1927" sound like they were written for today. "Louisiana, Louisiana, they're tryin' to wash us away."

"When I was breaking down my neighbor's apartment to get water..." LPO violinist Burt Callahan said, shaking his head and trailing off. "I've seen a lot of things you would never want to see."

Callahan, who rode out the hurricane in his St. Charles neighborhood apartment with his cat, Sparkles, has been staying in Whitehall, Montana with his friends.

"They're letting me become part of the family," he said. "Right now I'm in another world," he said after Friday's concert. "People are incredible to do these things to help. It's been an overwhelming experience." 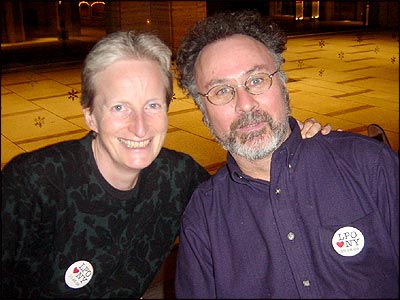 New York Phil President Zarin Mehta announced at the beginning of the concert that the benefit had raised almost $300,000 for the LPO. Listeners of a nationwide live radio broadcast then were encouraged to phone in pledges as well.

The LPO estimates that it needs between $850,000 and $1.1 million to fulfill its financial obligations for this canceled season, and survive. Simon said she hopes the efforts by the NYP musicians, board members, donors and audience inspire other cities to organize similar fundraisers for the LPO. After the concert, several LPO members spoke hopefully of future events with other orchestras.

The LPO last spring selected Mexican conductor Carlos Miguel Prieto to become the orchestra's new music director. Friday, he conducted the two orchestras in Copland's "Promise of Living," from the Tender Land Suite, eliciting a sound that made one imagine a hymn, but sung by 50 violins accompanied by the biggest church organ you've ever heard.

Itzhak Perlman, who had conducted a concert the night before, a concert that morning and a rehearsal in the afternoon, then treated the audience to the first movement of the Barber Violin Concerto, with James Conlon conducting. Barber is said to have meant the opening of the concerto to cushion the soloist like a "pillow of love," and on Friday night it was a very large and plush cushion indeed.

Violists Scott Slapin and Tanya Solomon walked into their flooded home between City Park and Gentilly in New Orleans for the first time since Hurricane Katrina.

"We saw stuff on T.V., but we weren't prepared," Slapin recalled, as he stood in his tuxedo in Lincoln Center after the concert. "Everything was covered in mold and slime. The couch was turned around, and on top of the treadmill. The bed had moved across the room. And the smell..." 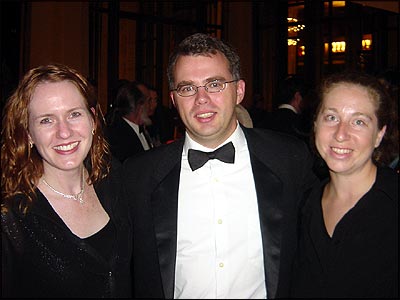 "The smell was indescribable and unforgettable," Slapin said. "We had masks on, and Vicks under our noses. A half hour later, we were eating a meal, and the food still tasted like mold. You just can't get the smell out."

"There was no color anywhere," Solomon added, "Everything was grey, and nothing is alive, it's all dead."

The couple is currently living in a hotel in Birmingham, Alabama, where Slapin is playing in the Birmingham Symphony. But it is not the home they worked so hard on, and it doesn't feel like their place. They miss their friends in the LPO, and they miss their home.

New Orleans native Wynton Marsalis long ago found a new home in Manhattan. And the New York crowd welcome the jazz legend on to the stage with a roar. Marsalis responded with a whistle.

That whistle morphed into backdrop of sound from his combo for his wide range of trumpet tune. After that came a very, very fast and wild ride. A check against a wristwatch clocked the metronome at a quarter=150, so those sixteenths he was playing (and it did not seem like an easy, repetitive pattern) were humming along at 600!

The last piece scheduled for the evening was Copland's "Fanfare for the Common Man." Would they end the evening with no strings? Orchestras often play an abbreviated version with only percussion and brass. But this was the entire movement from Copland's Symphony No. 3, elegantly conducted by Leonard Slatkin.

The piece starts like the Fanfare for the Common Man that we all know, with the pounding timpani and majestic brass. But then the timpani rolls away, like thunder becoming distant, a storm going away. The violas enter, then woodwinds, then an industrious little wickedly hard fugue for the strings.

Strength lies in so much more than the volume of the brass and the force of the drums, though the raw power of that is compelling. It is when every single voice makes its contribution that our "Fanfare for the Common Man" makes its clearest and most compelling utterance.

The orchestra responded to multiple ovations with " a few treats," in the words of Slatkin. Without a conductor, the orchestra played Bernstein's Overture to Candide. The piece has enough transitions and tempo changes to make this a bit of a feat, at least to do it well, despite the fact that most orchestral players have had it in their fingers since high school. How did they do it?

They listened to each other.

The musicians of the LPO hope to listen to one another again, and soon. "But tomorrow morning, we scatter," Sanno said. LPO musicians are currently living in Florida, Delaware, Seattle, Illinois, California, Montana, even Japan. "Literally everywhere."

"It was so overwhelming to see everybody," Sanno said. "These people have become my family since I moved to New Orleans eight years ago. All of a sudden, they were scattered."

"Even though this is wonderful, I think that any of us would trade this for having our normal lives back."

To contribute to the LPO Relief Fund, visit http://www.lpomusic.com/.

Heading to the Big Apple!

And I'm looking for people who are participating in “Bringing Back the Music,” a benefit for the Louisiana Philharmonic Orchestra, which is now scattered across the country after Hurricane Katrina.

I'd really like to talk to any musicians participating in this event. Are any of you playing it, or know someone who is? If so, you can e-mail me at laurie@violinist.com. I can also give you my cell, but I won't list it here online. I arrive in New York late Thursday, but can, of course, talk with anyone today. I can also meet people before or after the event. (I don't go home until late Sunday.)

Maybe I'll see some of you there!

And, of course, look for my report on the concert, including information on how you can help the LSO, later this week, here on Violinist.com.

The world turns, and the studio changes.

This week my most advanced student left for another studio, and I met my newest beginner.

I was sad to lose a student of five years, though I could recognize that it was time for her to be getting some different viewpoints. She's a lovely young lady, and I'll miss her. Her mother, who was truly full of gratitude and diplomacy, said in parting, “Maybe we'll see you some time when you are performing, and you won't even know we are watching you.” I'm too sentimental to accept that kind of statement with dry eyes!

But though change can be difficult, it is a good thing. In the same week that she left, a number of people called, and for the first time in a long time, I was able to accept some new students.

Today five-year-old Maggie arrived before me with a mop of curly, blondish hair and a somewhat quizzical look on her face. After 10 years of Suzuki, I'm comfortable with very young beginners, and I enjoyed the fact that I'm now well-versed in my own way of doing things. It allows for a bit more leeway.

I was ready for her with an assortment of seemingly non-violin-related items: ribbon, markers, a file folder.

While her younger sister ran in circles, Maggie studied me with some skepticism.

“We're going to start every lesson with a bow,” I informed her, guiding her to where she should stand. “And we're going to say a funny word, which means 'hello' in Japanese. 'Konnichiwa.' Can you say that?”

She looked at me mutely.

I took her over to my chair and asked, “Now, do you know which is your right hand, and which is your left?” Most five-year-olds don't, but some do.

“You know,” I interrupted. “I'm left-handed myself. I get very confused about which is which. We're just going to call one your bow hand, and the other your violin hand.” I took out a piece of purple ribbon, which matched her purple skirt. “Just so we can tell, I'm going to tie a bow on your bow hand.” She watched as I tied, then admired her wrist.

I then drew her a foot chart, and gave her a bit of work for her violin and “bow” hand to do as she placed her feet. Then we sat on the floor and clapped some rhythms. She did well, matching the claps to the vowels. Just one clap for the word, “Twinkle,” but it didn't take too much to get her to do two.

By this time she was wearing a wide smile and clapping with great enthusiasm.

We're on our way!