Auditioning for the LA Philharmonic

Well, I am not the newest member of the Los Angeles Philharmonic violin section.

I will tell you about it without answering the big “what did they wanna hear” question. People will continue to audition for the first round through Monday, so I won’t say anything that would make it unfair.

I did give it my best shot, and I thank the LA Phil for letting me do so. It was by far the most professionally-run audition I’ve ever attended, and I have attended quite a few. After dodging the crazed motorist that nearly cracked up my car on the way over and the major traffic jam caused by a big accident on the highway, I found the time I spent at Disney Concert Hall ran more smoothly than anything else during my day. 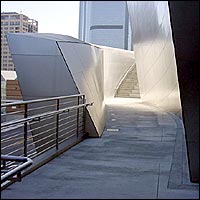 The new Disney Hall is quite an edifice, all that gleaming metal dancing with the sunlight. One can’t miss the building. The security guard told me just where to park, deep in the dark reaches of the parking lot, four floors under. I had my doubts about emerging in the right place in this circuitous mass of metal, but the elevator took me exactly to the sign-in desk, where I signed my name right after our own Gregory Lee’s -- small world.

Knowing there were 100-some candidates, I expected the communal warm-up room, with maybe 30 people all playing at once: the Tchaik here, the Sibelius here, all the different excerpts simultaneously at various speeds…Imagine my surprise when I was ushered politely to my own private, sound-proof practice room.

It was an inviting little dressing room, with a sky blue leather couch and a painting of lily pads in bright and peaceful shades of blue and green. There was a T.V. in the corner ceiling, and a nice big mirror in which I could see my sunken eyes and sleep-deprived face. (I finally gave in at 2 a.m. and took cold medicine so I could sleep.) Still, I felt calm, not too nervous.

On the wooden music stand was a letter of greetings, welcoming me to the lovely new Disney Hall and giving me instructions. I also found a very nice copy of the music we were to play, with instructions to put my markings in that music and use it for the audition. Nice idea, actually; it made things go quickly and smoothly. I had 45 minutes to mark in the fingerings and look over things.

Then I was shown to an outer room, next to the hall, where I could continue to warm up. So I didn’t have any uncomfortable moments of standing in a drafty backstage area, getting cold, while waiting to go on stage.

Then, to the middle of the stage in Disney Hall. Wow, all those colorful seats. It didn’t look that big from the center, but I felt how big it was when I started to play and all I could hear was something like a little squeaky mouse. Hmmm, my fiddle sounded a lot fuller in my living room…Here, against my ear, it sounded like the old student violin I had in the sixth grade. Could it be that all the beautiful, lush sound of my fiddle was magically going out into the hall? This was my fervent hope, though I suspected that some of this mousiness had to do with my adrenaline level. I didn’t feel super nervous or panicky, but certainly my heart was pumping and I wasn’t “relaxed.”

They had me play a respectable amount before saying, “Thank you,” though not the whole thing. Though they warned against taking that too seriously, I did perceive it as a death knell.

I packed my things and went to the green room to await the results. It was filled with pictures of giant flute keys, violin parts and piano keys tumbling like blocks. Blue couches lined the walls, and on one sat the girl who had gone before me, talking with someone on a cell phone. One by one, over about 45 minutes, eight more candidates arrived, having just finished their five- to ten-minutes in the sun. After me came a young man with a mop of curly hair, who sat down and pronounced, “Well, there’s nothing like having your entire life reduced to 20 to 30 seconds.” He paused and then added, “Next time I’m going to drink a ton of coffee, stick my hands in ice water, take a bunch of allergy medicine….”

After a while some friends arrived, Lorenz and Sam and some other girls I’ve played with in the Pasadena Symphony. We all knew each other, if not well, by acquaintance.

“It’s a party!” someone said. “Where’s the beer?” People talked and enjoyed the reunion, until the mood suddenly shifted with the entrance of our proctor, Jeff. Everyone fell into an almost reverent silence. Jeff gave one of the nicest speeches I’ve heard on such an occasion, before the inevitable dismissal of some and possible invitation of others to the semi-finals. He thanked us for coming, acknowledged our hard work and expense. Then he announced that three people would be invited to the semi-finals; I was not surprised, by this point, when I was not one of them! I was really happy, though, for my friend, Lorenz, who was invited to the semi-finals. Go Lorenz!

When it was all over, I lugged my violin outside and took a little walk around Disney Hall. I climbed up some steps to the top of one of the jagged edges, where I could see the LA Times building, where Robert works. I called him up and gave him the news. I didn’t really feel sad, happy, relieved, upset…just kind of blank. What now?

I’m sure there will be more auditions. And taking this one has helped me in so many ways. First, I learned the rep well and can now finally play all of the ridiculously long first movement of the Tchaik from memory. Now that’s something I’ve wanted to do since about the age of 10, when our family friend, Doug Bradley, a witty Brit who liked telling long stories and smoking cigars, introduced me to that impossible notion. He gave me the recording of Gene Fodor playing it, and I wore the little cassette until it went blank. So if Doug is watching from the heavens, hey, the freckle-faced kid finally did it!

I also learned how wonderful everyone on this board is. I couldn’t even begin to name everyone, I just know I will leave people out, but here are a few people I’d like to thank: my husband Robert, who does all the programming on this website and has watched the kids, gone to the grocery store, sent me to Denver, and kept saying, “Just do it!” You’re the best, Robert! And from all the encouragement I’ve received from the members of this board, Dimitri (those suggestions were so helpful), Emil Chudnovsky (thanks for keeping your fingers crossed for me! I know it is hard to play the violin that way.), Scott68, Edward Oh, Chris (who sent me the little orange men, banging their heads against brick walls!) Kelsey Z (wow, what a thread!), Carl Fulbrook, Jimmy Vo, Janet Griffiths, Buri, Keith Loke, Kazuyuki Fujita, Greg Socket, Emily Liz, Kevin Daugherty, Gregory Lee (I hope you are still in the running, if so, best of luck!), Owen Sutter, Joseph Franke, One-Sim Lam, violetcat, David Lillis, Lorenzo Z, Lauren Canitia, Brian Foster, Austin Mohr, Ryan Meehan, Ben Poore, Vernon Kirby, Lauri Kotila, Christian Delgado, Marcianne O’Day, Sue Donim, Rick Baccare, Pauline Lerner, Parmeeta Bhogal, Jenny Caelli, Mattias Eklund, Kismet Al-Hussaini, Deirdre Ni Mheachair, Justice Welp and Robert Fuller. More thanks to my fellow Suzuki teachers, especially Fritzie Culick and Julie Bamberger, to my orchestra friends Cathlin Reese, Tom Sender and Marisa McLeod, to LA Times reporter Chris Pasles and photographer Rick Loomis, to all my students who have been patient with me, to my yoga teacher Naader, to my coffee talk friend Ann, and to MY KIDS!

Just making that list is totally overwhelming, and I know it isn’t even complete! Thank you, thank you, to all of you. With each other’s support, we can all do great things. The first step is to try to do it, to shoot high! Even if you don’t reach the specific goal you have set, so many wonderful things will come on the way.