Well, it was a long and circuitous journey, but we made it over the Rockies and through the woods, to Grandma and Grandpa's condo in Denver.

Actually, Grandma and Grandpa (my in-laws) are not here, they are just letting us use their condo. We are here to spend Christmas with my buddy from high school and her family, our dear friends. Also, we are here to visit the Love of My Life, Colorado. Okay, well, at least it's my favorite place on the planet, Cleveland notwithstanding. ;)

The plan was to pack our bags, leave our sunny-and-75 home in Pasadena, and get over the Rocky Mountains without having any snow, ice or any type of problem whatsoever. Nonetheless, I got the major vehicle check the day before, and we packed our blankets, flashlights, water, etc.

After spending last night in St. George, Utah, I awoke very early to the sun rising in a deep blue sky (you mean, the sky is blue? We don't get that in LA!) and some serious cold weather.

Our first possible driving challenge was Fishlake National Forest, where we spent several hours last year white-knuckle driving through a snowstorm, barely able to discern where the white road met the white not-road. But today, the sky was as clear as a bell, and all we saw was a little snow on the ground. This was enough to excite our California kids, though.

“IT”S SNOWING!” said four-year-old Brian excitedly. “CAN WE STOP AND GET OUT AND PLAY IN THE SNOW?” Brian has no volume control these days.

My daughter, Natalie, at the more sophisticated age of seven, set him straight. “It is not snowing. Snow-ING is when the snow is coming down. This is snow. Not snow-ING. Just snow.”

Well, he was excited, but we were quite happy that it was *not* snowing. In fact, we breezed over that mountain pass as if it were the middle of July, without a care. As we were sailing down the other side of the mountain Robert looked at me.

But the clear blue sky held out, and we just kept flying through Utah, right to Colorado, where I insisted that we stop to take my picture at the “Welcome to Colorful Colorado” sign so I can blow it up and place it on my desk, next to the pictures of my husband and children. 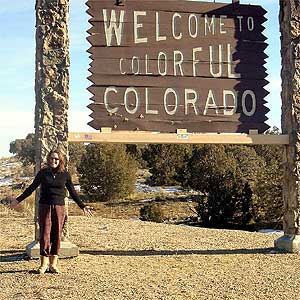 “We will never be making better time than this,” I told Robert, so in addition to a few stops for postcard pictures (my grandfather always used to say, “Why take a picture you can just buy on a postcard?”), we also stopped at my favorite doo-dad store in Fruita, Colorado.

This whole journey was looking pretty nice. When we got back on the road, I took out my cell phone and called my mom, dad and sister and brother-in-law in Cincinnati.

“I'm watching the full moon rise over snow-capped Rockies, against a pink sky!” I reported. “And we've had no ice, no traffic!”

They had just returned from church and reported, “It's five degrees here, and there are 30 inches of snow in places!”

Mom assured me that, had we tried to visit them, “It would have been a disaster, for sure.”

At any rate, since my family lived for a long time in Colorado and loves going back, I was asking them for restaurant suggestions in Summit County. Though I had doubts about finding a restaurant that was open on Christmas Eve, and getting in with no reservations, I wrote down a few possibilities.

This is when my friend, Laura, from Denver, called. “Looks like there's been a terrible accident; they've closed off Interstate 70 at the Eisenhower Tunnel. From the TV, it looks pretty hopeless, cars lined up for...well, a long way. And they aren't moving.”

That's kind of like saying that your circulatory system as been shut off at the aorta; it's pretty tough to find a good work-around to get over the Continental Divide.

“I think that's our karma, running out,” said Robert.

This is when we decided to go for the luxurious dinner. Why not? We exited at Frisco, a nice little town near a lake, surrounded by 14,000-foot, snow-capped peaks. As we drove into town, we noticed the fairy lights all over the pines trees and even aspen trees. Though much is closed on Christmas Eve, this little town was sparkling with lights and with the kind of feathery, high-altitude snow you can practically blow off your car. Many of the restaurants were clearly open for the holiday. My sister, Katie, had recommended an Italian restaurant called “Tuscato,” and they seated us right when we walked in. It could not have been more perfect: a warm atmosphere, lots of windows looking out on that Christmas-y street scene, and great food. Robert had spaghetti and meatballs. I had a fabulous salad with blue cheese and a steak. The kids pretended to eat pizza and pasta. Then we all shared a piece of cheesecake. Our bellies were full.

The kids still wanted to “play in the snow.” They didn't really understand that when it's 10 degrees and dark, this is not ideal playing weather. We let them throw a few snowballs, then we piled back in our little car.

We pulled into a gas station to get out an atlas, and at this point we met a semi-frantic fellow traveler, who said, “The tunnel is closed! What do I do? How do I get to Denver?”

Still closed. I wondered if we should get a hotel. This is when Robert had a brilliant flashback to when we used to live in Colorado, and he said, “You know, we are on the road that can take us to the alternate route, through Fairplay.”

“Isn't there a really high mountain pass?” I asked.

It was a long detour. But not too many people seemed to be doing it, and with good weather, why not try a 11,000-foot mountain pass in December?

“ARE WE THERE?” inquired my son, not for the first time.

Soon after we set out, I noticed that the full moon was illuminating all the snowy peaks. With such thin air, the light from the moon has a powerful effect, almost like daylight. And despite all that light, the stars were poking through the dark blue sky with their own brilliance.

“This is gorgeous!” I said. Even the kids seemed spellbound. We drove through Breckenridge, past little Victorian houses covered with lights, open restaurants with happy skiers, even an open Starbuck's.

As we left civilization and crept up toward “Hoosier Pass,” around hairpin turns, closer and closer to the sky, our eyes kept turning skyward. The stars, the moon, the sky! A big, white cloud looked like it had been painted in flourescent paints with in one grandiose stroke across the sky. We marveled at it.

“Maybe it's Santa's highway,” I conjectured.

“That isn't Santa,” said Natalie, more knowingly. “But maybe we will see him...I think I see a light over there...”

We drove the scenic route until we saw that carpet of lights on the ground called Denver, the place where I grew up. I smiled the whole way, what a perfect Christmas Eve! Now I'd better sign off, so Santa will come!

Your trip to Denver sounds great. It reminds me of my visit to a friend in Denver for Xmas several years ago. My friends back East are very impressed when I tell them that I drove Loveland Pass in winter -- me, with motion sickness. I well remember those hairpin turns, the packed snow under the tires, and the steepness of the road as we approached 11,900 ft. Coming back down the mountain near dusk, we saw Denver at the foot of the mountain, with the start of the Great Plains and a rosy pink sky behind it. At one point, I believe I saw a cowboy walking his horse by a creek on the side of the highway, or is that just something that happens to your mind out there with so much beauty all around?

From Lauren Canitia
Posted on January 11, 2005 at 4:40 AM
What a lovely Christmas you had! I can totally vouche for those living in Cleveland and Cincinnati! In Cleveland it was about 10 degrees with 25 inches of snow! Crazyness. It was fun though! Especailly when the weather was so bad 2 days before and Christmas they weren't plowing! I couldn't go anywhere. I like snow!