April 5, 2020, 6:15 PM · Blursday, the umpteenth of Whatever; stuck at home, practicing anti-social distancing. This recent forced vacation allows time to finally write this, partly to clarify my thoughts, but mostly to provoke some comments from my superiors on the panel.

I have been through about five ways of holding or using the bow, and three times have experienced the breakdown in technique that can happen when you change styles. 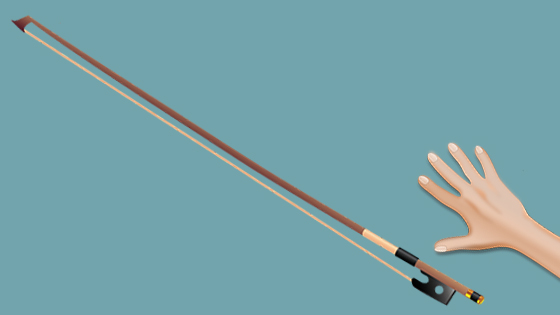 I do not remember the details from teacher #1. He was a Czech immigrant, which would put him in the Sevcik school. I do remember that my fingers were closer together, and the focus of energy was on the second finger. Short-term teachers #2,3,&4 did not change my bow-hold. I think I had a reputation among my fellow students of having good bow control, but not enough volume. Teacher #5 at that time was a fan of the old "German" hold, with the hyper-extended first finger, which works well for early music. That did not last long. Teacher #6, my last, converted me to what is known as the Franco-Belgian ("F.B.") hold, with the first finger contacting the stick between the first and second joints, well in front of the thumb. This provided more volume from improved first finger leverage. That helped me at my regular six-nights-per-week job with Mariachi Los Camperos (two trumpets vs. six violins!)

For teaching I prefer the F.B. hold; it is easy to explain. Each finger has one job: The thumb holds the bow up, the first finger supplies leverage for the upper half of the bow. The second finger, across from the thumb, is the pivot point. The fourth finger supports the weight of the bow at the lower half, and whenever the bow is in the air, off the string. The third finger causes trouble. Its job should be to help transfer arm-weight at the lower half, but if we pull on it, it pulls the bow tip out over the fingerboard. If we try to play louder by pushing down on the third finger, we get the opposite result of what we want. Because the third finger is on the other side of the thumb, any force applied there will cause the bow to lift, lose traction, even bounce. And, the third and fourth finger are not completely independent.

The one disadvantage of the F.B. hold is that there is an unstable spot at the middle of the bow, the balance point, the cross-over point between upper-half leverage and lower-half arm-weight. This is where both the hair and the stick are most flexible - the bow wants to bounce! Many students have the paradoxical problem of not being able to bounce when they want to, but they do bounce in the middle on long tones. There are two ways to finesse the cross-over point. One is to delay the switch from leverage on an up-bow until well past the middle, and do the opposite on a down-bow; delay the switch from arm-weight to leverage until past the middle. The other way is to mentally divide the bow into three parts; the upper third is first-finger leverage, the middle third is about balance, the lower third is arm-weight felt at the base joint of the fourth finger. Then, if I want the light, fast spiccato at the middle, I just take the weight off; gravity and the natural spring of the bow do the work.

I have tried the Russian hold several times, on my own, without a teacher. After all, you can see it on YouTube videos of great soloists from the past, and it is advocated by major-league teachers, like Carl Flesch. The Russian hold is when the stick contacts the first finger between the base joint and the first joint. Each time I have found it to be clumsy and the spiccato was hard to control. I think that is because it puts the cross-over point much lower in the bow, below the balance point. On the E-string, with the bow almost vertical, one can use leverage for almost the whole bow.

Only one year ago I tried it again, a little more systematic this time, with more interesting results. For the first round, I used the Russian hold while doing my Mariachi jobs, which is always loud and never off the string. That worked, and there was less fatigue in the right arm after the usual multiple hours of hard playing. Next I tried it on my viola; the bow is a little farther out there. I reviewed my favorite bowing book, Sevcik Op. 3, on viola with the Russian hold. After several days I worked past the awkward stage, but never did reproduce the spiccato that I wanted. What I can report is that, for me, the Russian hold produced a better quality of sound, which is a mystery. And it lends itself itself to a faster bow speed, instead of relying on force.

One surprise was that I was able to use a bow that was too light and floppy to use with my previous technique. When I get a student who already has the Russian hold, their fourth finger is usually locked and straight, preventing both control and volume. I have a hunch that one reason some major soloists will use the Russian hold is that they really don't need to have the very light, very fast spiccato that orchestral violinists need. They always need to project, so they will add some arm motion.

There is another bowing style that I have done that I have not seen discussed in print and does not have an official label that I know of; so I will call it the "Pivot." To keep the bow parallel to the bridge, most players bend the wrist. But a few appear to not bend the wrist at all, it stays straight. It looks like the F.B. hold at the frog, and like the Russian when at the tip. The way to do that is to let the bow float, pivot inside the hand. If you pull sideways with the first finger the tip of the bow moves towards the bridge. If you pull sideways with the third finger the bow tip moves out over the fingerboard. In practice, I never need to pull on the third finger. To synchronize this pivot motion with a whole bow stoke is a complex motion, and I don't try to teach it. In addition to this horizontal pivot, the bow can pivot vertically in the hand for quick string changes, using gravity and the fourth finger.

Another factor that I have not seen in print is that moving between the Russian and F.B. hold changes the angle that the bow makes coming out of the hand. This angle needs to match the horizontal angle of the violin. Those that have the violin very far to the left will want to use the Russian hold. Early music specialists, with the violin more towards the front, will not use the Russian hold.

So what do I do now? It is a mix, a compromise. The F.B. is modified a little. The stick is leaning on the first joint instead of half-way between the first and second joints. I do some pivoting to reduce the amount of wrist bending.

I hope that all makes some sense. Verbal descriptions of bowing technique are confusing and a little dangerous. When you see good bowing the hand does not appear to be doing anything at all.

April 6, 2020 at 08:46 PM · I prefer a Franco-Belgian hold but I continue to watch a lot of really outstanding violinists play with all sorts of holds and I am increasingly convinced that there is something more fundamental than bowhold. Let me call it "sound image". If you know the sound you want you can probably get it if you only had two fingers on your right hand. A lot of us take along time to get a sound image in our heads. But I know that once I did, the rest was/is refinement.

April 7, 2020 at 12:05 PM · Excellent overview of the varieties of bow holds There are so many moving parts that make it up. Your article thoroughly covers what changes occur during the length of the bow and what to look out for. How we coach ourself depends on how well we know our individual bow arm. I have a running conversation with my bow arm. Your last line nicely sums upr the fact that, at the end of the intellectual process, the hand should be very flexible. Some of us have a well placed and well formed bow hold, while others have passive monkey paws. They can both work.

April 8, 2020 at 04:03 PM · M. Cleveland's bow hold ?- amusing, I'm glad he's working. It's something between a cello grip and a baseball bat. As a bluegrass fiddler, he doesn't need to do off the string techniques or finesse at the frog, so he doesn't need the counterbalance of the fourth finger. It's another example of what invisible things you do with your hand are just as important as how you hold it.

April 8, 2020 at 08:59 PM · I recently started playing violin again after more than a decade of almost exclusively playing viola. Interestingly, although I use a Franco-Belgian bow hold on viola consistently, and have used it since I started playing, I notice that my hand naturally falls into a Russian bow hold on violin. I wonder if it's because of the difference in angle -- while I don't hold the violin especially far to the left, I angle the viola out in front of me much more.

April 9, 2020 at 08:42 AM · Thank you for sharing your experience, after everybody is a little different and adapts his technique to his morphology.