Poor Yorick and the Viola: Melissa Dunphy’s iHamlet opens at the Philly Fringe 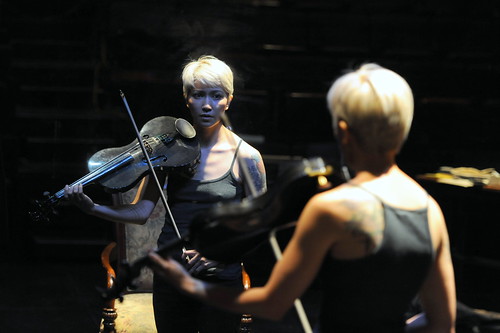 Actor/composer/violist Melissa Dunphy stars in iHamlet, Philadelphia Shakespeare Theatre
Every September my city, Philadelphia, belies a stodgy reputation and throws its heart and soul into an edgy two-week all-arts (dance, theater, visual arts, music and spoken-word) festival we call Philly Fringe. The festival, now in its 19th year, inspired by the Edinburgh, Scotland Fringe Festival, is one of many that take place all over North America in late summer and early fall. Here in Philly, the most interesting and innovative performances of the year happen during the Fringe.

Oh, did I mention that Melissa, in addition to being an award-winning, nationally recognized and totally exciting young composer and one of our city's finest Shakespearian actors, is also a violist? 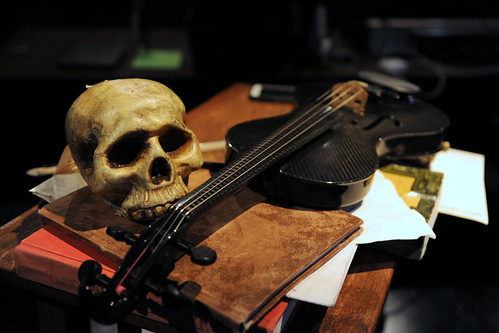 The other day while perusing some advance photos of the show, which opens this Sunday, I noticed a still life image of Melissa's Luis and Clark carbon fiber viola artfully arranged next to poor Yorick's scull. Intrigued, I contacted Melissa to find out if she were planning to play her viola during the performance.

And she said yes. I asked her to explain the thinking behind the choice to play viola throughout the performance.

"Robin Malan's script calls for some singing, specifically, the What a piece of work is man quotes from its setting in the musical Hair," says Melissa. "I realized it would work better if I could accompany myself on something like a mandolin or mandola.

"Of course, I'd just got my Luis and Clark viola recently, and it's so beautiful and black and begging to be shown off as often as possible. So my first suggestion was to use that and strum it. The director, David O'Connor, then immediately suggested that I play the viola at the top of the show in the first tableau. The rest of the musical interjections grew organically out of that.

"I love that my baby is in the show with me! It's a one-person show, but having my viola with me makes me feel like there's another character on stage. And honestly, it looks exactly like the kind of instrument this particular Hamlet would play.

"The viola in the show is what Hamlet turns to in moments of introspection, when he's trying to calm himself or sort through his feelings. And then during the play-within-a-play, it provides the diegetic music.

"The viola is often considered a melancholy instrument, which is perfect for Hamlet's melancholia. In the recorded music, it makes the sound of the ghost's appearances, which is full of screeches and harmonics and spooky noises."

34-year-old Dunphy was catapulted into the national spotlight four years ago during the 2010 Philly Fringe Festival when, as a first-year PhD student in the University of Pennsylvania's music composition program, she produced the debut performance of The Gonzales Cantata,  a 40-minute choral work written in what she calls “pop neo-Baroque” style. Scored for harpsichord, and chamber orchestra, the cantata is based on the U.S. Senate Judiciary Committee hearings that led to the resignation of Attorney General Alberto Gonzales. Rachel Maddow called it "probably the coolest thing you will ever see on this show."

Since then Melissa's award-winning works, including Tesla's Pigeon, a song cycle for soprano and orchestra and What do you think I fought for at Omaha Beach?, a choral setting of excerpts of public testimony given before the Maine Senate by WWII veteran Phillip Spooner in a hearing to discuss the Marriage Equality Bill on April 22, 2009, have been performed nationally. Currently, she's finishing up an opera about the sex life of Ayn Rand as narrated by Alan Greenspan.

During the past few years, Melissa has been on a self-imposed hiatus from film and theater projects in order to concentrate on composing and music performance (she plays regularly in her noise-pop duo, Up Your Cherry, with her husband, musician and web developer Matt Dunphy). And that's too bad for the theater community. Dunphy, hailed by Philadelphia Inquirer as "unquestionably the city's leading Shakespeare ingénue", is one of those once-in-a-century talents who burns bright everywhere she points.

Well, she's back. iHamlet runs September 7th through 14th at Philadelphia Shakespeare Theatre. Tickets are $25 with some discounts for students and seniors. Shakespeare and viola. iS there anything more delicious? iDon't think so. We have tickets for next Saturday. 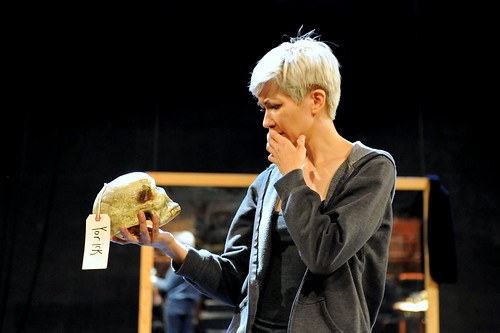 Last week, after I published an essay on Busking for Life, Melissa sent me a link to her own blog post on busking, which contains seven very practical must-read tips. Read it here on her blog.

From 50.200.179.82
Posted on September 5, 2014 at 4:17 PM
If only I could get to Philly this weekend to see her performance! Thanks for the link to her blog. The tips are definitely helpful. Busking is on my bucket list, and I will surely take her advice.