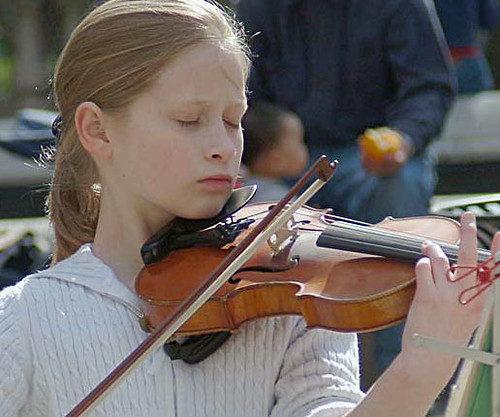 I hadn't even heard the term "busking"until my kids told me that they wanted to do it. When they did, I grabbed a dictionary: to play music or otherwise perform for voluntary donations in the street. That seemed a little—how could I put it?—unsavory. Or, on second thought, maybe not. We'd spent, after all, thousands in lessons and instruments, which they had worked hard to learn how to play. Maybe it would be a lesson in personal economics, like a lemonade stand.

The girls were eight and ten at the time, and their goal was to earn enough to buy a Playmobil Grand Mansion dollhouse from the toy store up the street. The dream dollhouse was a very large and, I thought, unattractive object comprised of hundreds of tiny parts, something I really did not want inside my life-size house. And it cost over a hundred dollars, which I doubted they would be able to earn. I gave them the go-ahead to busk, expecting they'd earn a few dollars and spend it on ice cream.

They made their goal in a single afternoon. Apparently, little kids playing Bach are hard to resist, so the empty half-size violin case they'd set out on the corner with its hand-lettered sign, "Busking for a Doll House", quickly filled with cash. Their dollhouse, purchased and painstakingly assembled, took over the living room.

Next week they went out to busk some more.

Ours is in a quirky but pleasant urban neighborhood where cops patrol their beat on horseback and neighbors plant free lending libraries in their front yards. We have a lot of garden festivals and craft fairs where you'll see street musicians, both those hired by the business association and those playing for tips. Even on ordinary week days, our main street, lined with restaurants and coffee shops is a perfect place for busking. You don't need a permit like you do downtown or in the subway. Passers-by are friendly—no one shrieks at you to be quiet or tries to rip you off— and, rather than shooing you away from their stores, shop keepers cheer you on. Busking draws a crowd, and crowds are good for business.

I was never a hundred percent pro-busking when my kids were growing up because it ate into practice time. And you could hardly call it high-quality performing. Busking is something you do as a treat after your chores are done. It's a specialized skill: you don't play your real repertoire. You play arrangements, pieces that are recognizable, or at least easily digestible. Audiences want Pachelbel, not Paganini. You need to be able to grin back at dancing toddlers while their mothers pepper you with questions about Suzuki method and the best age to start lessons. You have to field requests ("Do you know anything by Beyoncé?") But the pay is great.

When they were younger my kids often busked to raise funds for charity. Once, outside of Starbucks, they earned a record-breaking $300 in less than an hour for earthquake rescue efforts in Haiti. The Starbucks manager brought them free Frappuccinos because they were attracting so many thirsty customers. Then the manager from the cheese store up the street came out and told them they could play in front of his place any time. Over the years my kids and their friends have done a lot busking, in lots of different cities. One of my daughters now lives in New York, where she busks in Central Park with friends whenever she can fit in a spare hour or two. Even though she's a far better musician now than at age eight, the take isn't as good there as it was years ago back home—only about $50/hour. Or maybe the take is lower because she's grown up.

It's been years since she busked in the neighborhood. When she's home now busking is the last thing on her mind. She's focused on the family, or practicing in the quiet of our house, or getting ready for a real performance. But I'll admit I miss walking up the street and hearing the sound of her Bach traveling on the wind. 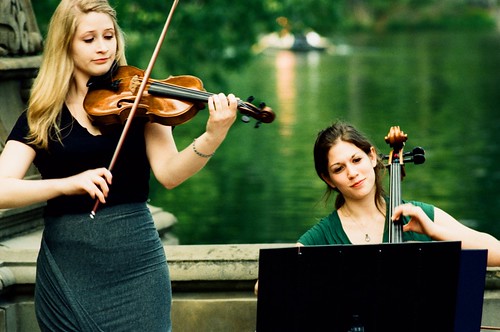 Before my kids started busking I barely noticed street musicians. But now I give money to all of them, no matter what they're playing or how well. It's a compulsion shared by many parents of musicians. I start digging in my wallet as soon as I hear the music: the erhu player outside the Art Institute; the subway saxophonist; the accordion player in lederhosen with a stuffed monkey clipped to his shoulder. I can't walk by without stopping, and listening, and giving.

The other day I was out walking my dogs when I heard a faint but unmistakable sound: a fakebook arrangement of "Some Enchanted Evening". The busker I found when I rounded the corner was 87-year-old Patricia Woods Sellers, tapping away on a portable keyboard plugged into the electric supply of the hardware store. I stood there, my dogs wagging their tails, held in place by her jaunty, indomitable style.

I know it's not polite to talk to buskers, but I also know they're adept at talking while they play. So I asked if I could photograph her (she was all for it) and I asked her about herself. She told me that in 2011 she was fired from her job of 24 years at our neighborhood Cricket Club. (I don't belong, but yes, our neighborhood has a Cricket Club.)

"New management took over and they got rid of the old," she said, smiling dryly without missing a beat. Without a real piano now (she had to sell hers, she said) she makes do with a borrowed keyboard, busking for tips on the sidewalk in good weather.

I don't know the real story behind the employment dispute, but if you do the math, this 87-year-old was 84 in 2011 when she was let go. And here she is, dignified, beautiful, and playing well. "I'm here mostly on Saturdays," she said. If the weather's good this weekend, I'm going back to look for her. I want to hear her while I can, before the chill of winter. 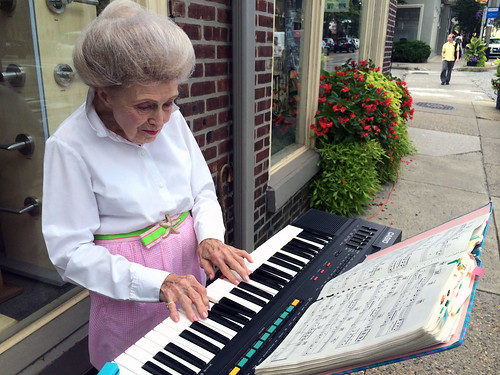 From 86.40.24.176
Posted on August 29, 2014 at 9:45 PM
What a fascinating and pleasant article that was to read. It brought back all my memories of busking to traditional music with my two brothers in Ireland as children.
From 24.191.29.247
Posted on August 30, 2014 at 2:06 AM
What a beautiful tribute to your daughters and to buskers. I am a busker in New York City as well. Aside from teaching, it is the most thrilling and rewarding thing I do.

Watching people's moods change, seeing a couple dance a bit, hearing someone say, "Thank you, that was my mother's favorite song,"that's what it is really about.

Yes, I need the money, but I also get a reward from those fleeting but significant moments interacting with the people who come by.

One note, it is not necessary to have a permit to busk on the subway platforms in NYC. There is, unfortunately, some confusion about that and buskers are working together to help to clear that up. Thank you for bringing honor to this fine and ancient tradition.

I am surprised to learn you don't need a permit to busk in the NYC subways. I'd been told that it's a lengthy process, but I guess that is an urban legend. Thanks for this information!

From Kevin Keating
Posted on August 30, 2014 at 1:01 PM
I used to play in NYC's subway tunnels when I lived there several years ago. It's a very rewarding experience. It also doesn't really require a large repertoire. Since the audience is constantly moving and changing, you can get by with a small handful of tunes/songs. You can repeat verses, extend choruses, arrange them whatever way you want. I knew one guy who used to sing All Along the Watchtower over and over, sometimes just the last verse. When the train pulls away you've got a new crowd and you just start your 10 or 15 minute set all over again, or just play what you're most confident with. It's part of the culture there. Tourists want to see street musicians playing for tips.

Some musicians, however, can be very territorial. That's how some of them eat.

From John Rokos
Posted on August 30, 2014 at 6:42 PM
Cricket? in Pennsylvania? I didn't know civilization had spread that far west! (Actually, I haven't the faintest interest in the game, other than telling the temporarily gastrically challenged that they're the envy of the England cricket team {because they need the runs}).

There were charity performances of "A Midsummer Night's Dream" in Pevensey Castle one year, and my retired Dad was in charge of the music. Some of the orchestra were asked to busk in the castle grounds during the day and a teenage violin pupil of his and I (on the viola) found a place to busk where there were people, and we played through Salinger's Round, Melancholy Galliard (viola part much easier when somebody else is playing the tune), and Agincourt Song. After it was over, a lady's comment retailed to me was "I'm familiar with all these tunes and have heard them many times, but I never imagined I'd hear them played just outside a portaloo".

From Karen Rile
Posted on August 30, 2014 at 7:46 PM
There are actually several cricket clubs in or near Philadelphia. The Philadelphia Cricket club, near my neighborhood, is the oldest country club in the US, founded in 1854. We don't belong, but our neighbor told me that the woman pictured played at the cocktail hour of her wedding, which was held there.
From Karen Allendoerfer
Posted on September 2, 2014 at 1:38 AM
I've played at the Farmers' Market for several years now, alone, with my kids, and with my string quartet. We don't put out our cases for money, it's considered community service. But we get coupons for use at the market, which is nice.

It's interesting to me that even you once considered busking to be "unsavory." When I first told my mother that I was going to play at the Farmers' Market, I was 40 years old and a mother myself. But her reaction was still extremely negative, and the negativity seemed to center on the money aspect of it. "How will they know you aren't a beggar?" she asked.

Fortunately, she's come around in the intervening years, but I think some of the reason she has is that I told her it was for community service, not for money. I don't think there's anything wrong with buskers playing for money, but I would probably still feel uncomfortable doing it myself--I'd hear my mother's voice in the back of my head.