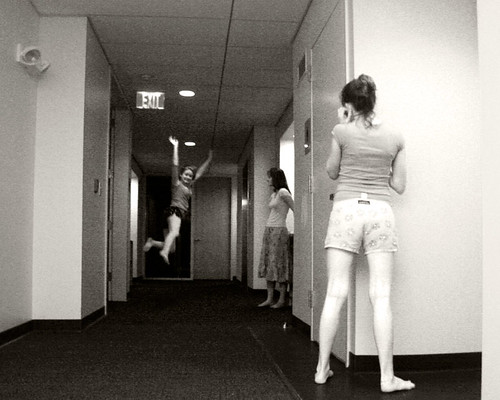 It was Parents Weekend at junior chamber music camp. My daughter, just out of eighth grade, had been attending this program since she was ten. As for me, I was looking forward to a reunion with all the kids, parents, and staff I'd known for the past five summers.

But when I arrived on campus and greeted the director outside the recital barn, she didn't smile back. "Your daughter is making my life difficult," she complained. "We caught her and a friend sneaking out of their cabins at night to hang out with their little boyfriends."

I looked at her in amazement. Boyfriend? That didn't sound like the mild-mannered, retainer-wearing, Harry Potter-reading, freckle-face girl I dropped off a week ago. I stammered out an apology.

"It's a terrible example for the younger kids," said director. She walked away, still angry.

My daughter, a middle child, had always been easy: diligent, good-humored, good with grown-ups. Although I understood that it's developmentally appropriate for teens push against boundaries, I was not quite ready to hear that she was behaving like, well, a teenager.

When I was able to talk with her privately, my daughter admitted that she'd been sneaking out of her cabin after lights-out. But she protested that "all the older kids snuck out at night" to stargaze together on the tennis courts; she insisted it was an innocent camp-wide tradition to which the administration usually turns a blind eye. They'd only gotten in trouble, she said, because her friend had sassed a counselor, who'd reported them.

While I was glad she was confiding in me, I didn't want to give her an impression that I supported her behavior or agreed that the counselor was in the wrong, a snitch. "It's not okay to break the curfew. It isn't fair to the counselors. It forces them into the position of having to discipline you."

"But they don't care. They know we're not doing anything bad. Sneaking out is traditional. We're practically expected to."

I changed my tactic. "The rules are in place to protect you. But rules also protect the camp. If a student got hurt while unsupervised, there could be a lawsuit, and that might put the entire program out of business. You wouldn't want that to happen, would you?"

"No! But everyone's over-reacting about this. Nothing terrible's going happen!"

I pulled out the big guns. "Besides, you've always said you want to work here when you're older. Do you think they'll hire you if you were a troublemaker when you were a camper?"

In retrospect I realized that my daughter was probably too old to return to her childhood music camp for one last summer. She would have been happier (and less of an outlaw) at the camp's senior session, where the curfew was a little later and the rules were relaxed. After that summer, she attended festivals where she fell into the middle age range, and stayed out of trouble—as far as I know. But throughout her high school years, and even during college, I heard tell of many of her peers expelled from their summer programs. You name a summer festival that accepts students under 21, and I'll bet a kid or two or more will be sent home for disciplinary reasons before the end of the season. The most common offenses are curfew violations and underage drinking. But some of the stories are hair-raising. Sneaking back through a window after a late night drinking, a girl steps right into her sleeping roommate's double bass, shattering the instrument. Another student is publicly excoriated, then dismissed for taking a friend's prescription beta blocker because he was feeling nervous before a high-stakes performance. The entire cello section (almost) is caught smoking pot in the woods.

Why is my kid doing this? During the school year young musicians are constantly on the radar of their parents, teachers, and coaches. With all the practicing, rehearsing, and homework, they don't have much leisure or privacy to stage small rebellions or work on differentiating themselves from their parents. Away from home for the summer, they can try out a new social persona in a relatively safe, self-contained environment. In general these experiments lead to healthy, intrapersonal growth. But they can also lead to trouble. It's important for parents to realize that the music camps and music festivals do not provide the same level of supervision that their teens receive at home.

If my kid gets caught acting out at music camp, is his professional life over? The classical music world is small and personal reputation is important. But youthful hijinks like curfew violations are forgivable (unlike showing up late for rehearsal or playing out-of-tune.) Maybe it's because teachers, conductors, and coaches were all once teenagers, too. Or maybe it's that they simply aren't concerned with what goes on after hours in the dorms, as long as performance standards are maintained. With a teacher's backing, many students are subsequently readmitted to the same program that disciplined or dismissed them. So while you may be right to worry about your kid's emotional and physical well-being, don't stay up nights bemoaning the loss of his career.

Why isn't the program doing a better job watching over my kid? Summer music programs provide a pedagogically beneficial environment for young musicians: lessons, coachings, and rehearsals. But the primary mission of a festival is the institution itself—performance aesthetics, audience development, and fundraising. They aren't (for the most part) schools. Festivals and summer programs do provide students with opportunities for educational, professional, and personal growth, but it may be too much to expect them to get involved with students' psychological health and development. That, parents, is your job.

What do I need to look out before I select a summer program? While it's flattering to think that your 13-year-old will be playing alongside college kids, do you really want her socializing with them? Or dating them? Find out what the dorm situation is and what the breakdown is among the ages. Are younger students sequestered? Are their curfew rules different? Will they have a space to socialize among themselves? If not, consider waiting for a few years before sending your child. The camp will still be there when she's older. Once you've settled on a camp, read the handbook, and have your student read it, too. Make sure he understands the consequences of breaking rules.

What do I say to my kid if I find out he's broken the rules? The most important thing you can do is keep the lines of communication open. Let him tell his side of the story without interrupting (as hard as that can be). Remember that this experience is one of many that will help him define for himself who he is and what kind of adult he is becoming. Adolescents are in a constant state of transition. The quiet nerd morphs into the cool druggy guy. The shy wallflower reinvents herself as the party girl. She is probably not very comfortable in her temporary new skin and doesn't want to get stuck there. Give her your love and support and the space she needs to keep evolving.

When my daughter's friend, a college student, was disciplined for underage drinking at a summer program, her punishment was to telephone her mother from the office of the program director and confess her indiscretion. The young woman was terribly anxious because her parents are conservative and their religion forbids consumption of alcohol. The mom's reaction was perfect, something we all can learn from. You little stinker! she said, in voice that was simultaneously affectionate, droll, and concerned. And that was that: her daughter had permission to let it go, move on and keep growing.

From Adam DeGraff
Posted on August 7, 2014 at 10:45 PM
This one time... at band camp.
Sorry. Couldn't resist.
From Karen Rile
Posted on August 8, 2014 at 12:28 AM
I'll admit that passed through my mind, too!
From 108.184.41.97
Posted on August 8, 2014 at 1:33 AM
Mine just broke a window (screwing around not maliciously) and didn't turn in her key at PIMF. 175 dollar mistake that she is now paying off by doing chores. Hopefully pulling weeds will jog her memory next year.
From Laurie Niles
Posted on August 8, 2014 at 2:06 AM
Adam, you are so dead-on!
From 65.128.69.211
Posted on August 8, 2014 at 4:51 AM
I Knew I should have taken up the cello!
From Karen Rile
Posted on August 8, 2014 at 11:56 AM
Or you could just go to Aspen!
From Paul Deck
Posted on August 8, 2014 at 1:50 PM
Fun reading! Maybe it's the kids who *never* do these things that might be of greater concern, especially when the activity itself, setting aside the curfew violation, sounds fairly innocent and even wholesome. Your daughter judged that sneaking out to star-gaze and chit-chat was an acceptable overstep. She would have left if they started passing joints around. Both are signs of a good upbringing in my opinion.
From Charon Becker
Posted on August 8, 2014 at 8:43 PM
I was at a summer festival several years ago, where I was enjoying adult beverages with several other "campers". Campus police found us, proceeded to "bust" our activities, and found out we were all in our mid- to late-20's. Embarrassed, they had to leave us to our activities. It was quite funny, but I definitely FELT like I was 13 again...
From 206.108.25.22
Posted on August 9, 2014 at 5:41 AM
I'm amazed how many parents have no clue how their own kids are behaving at camp or other places. Especially moms of boys get so defensive when you tell them their kids aren't behaving. Get over it, moms. Your kids aren't perfect.
From Malcolm Turner
Posted on August 9, 2014 at 7:23 AM
How things change. A lot of years ago I was in my County youth Orchestra where we had residential courses in the school holidays - a week at Christmas, a week at Easter etc. The standard routine there was a lot of rehearsal during the day, then spend the evening in the pub and then quite possibly inter-dormitory raids during the night. Great fun!
Now, we were older than this group - up to 21, but a lot of us were certainly below legal drinking age ( 18 here in the UK). The staff knew what was going on and basically just made sure that things didn't go too far.