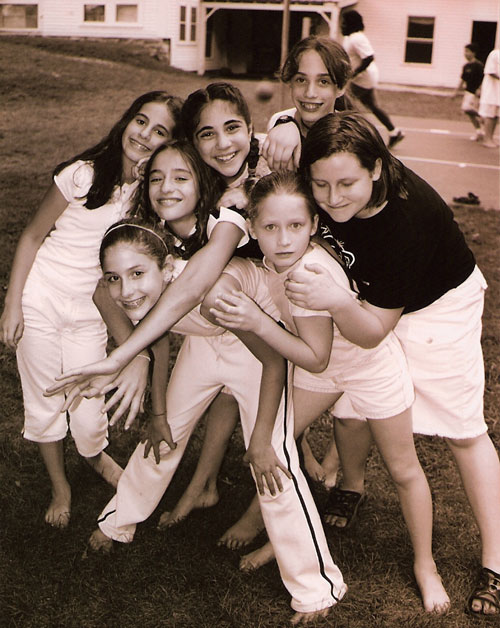 In the community where I grew up, kids didn't go to sleep-away camp. But when I got to college I quickly learned about hidden camp-buddy networks. Students from all over the country arrived at my university freshman year already knowing one another because they'd been bunkmates in Maine or the Berkshires. The camps, with their faux-Native American names, sounded bizarre to me. I didn't understand the appeal. Plus, my parents would never have laid out thousands for me to spend July and August learning pottery and windsurfing. From my perspective as a middle-class city kid, the idea of going to camp all the way through high school seemed infantile. Summers were for earning money, reading, and enjoying a little freedom.

Years later, when my own kids were little, my husband and I began taking them to Suzuki institutes in July. The whole family would stay in a hotel for a focused, intense music-learning experience. At the institutes, we could practically see our kids maturing before our eyes. When they aged out of Suzuki, it felt natural for the kids to do some kind of summer musical study, so we started them out with daytime programs at the local music schools. At ages eight and eleven, our two older daughters attended "Strings '98" (now Philadelphia International Music Festival), a local, non-auditioned, one-week sleep-away camp that at the time was held at a mosquito-ridden campground in rural New Jersey. (Now it's held on the upscale campus of Bryn Mawr College in suburban Philadelphia.) The girls came home from their short sleep-away experience energized and excited about music.

Musician friends told us about the Kinhaven School in Weston, Vermont, a summer chamber music program with a junior session for kids ages ten to thirteen. It sounded great, but were our kids good enough to get in? Applying to an auditioned camp seemed like a huge hassle because we had no idea how to make a recording. Our older daughters' teacher, a technophobe, didn't have any suggestions. None of his other students went away to camps. So we borrowed an enormous, dusty old reel-to-reel tape recorder and some microphones from a friend who'd been a radio DJ in college, and we recorded a recital of our girls playing the Bach Double with my husband on piano. Then we had to find someone to help us transfer the reel to a cassette.

Of course, they were rejected. "Next year send us a tape of each girl playing separately," said the polite note.

Discouraged, we skipped a couple summers, and our oldest daughter lost interest. But then my middle daughters begged to go to Kinhaven, which they'd heard about from the kids in their precollege program. This time, I called up the director and she agreed to audition them in person, at her home in Lehigh Valley, Pennsylvania. It was a long journey, but so worth it since we didn't have to drag out the monstrous tape recorder again—and we got to meet Nancy Bidlack in person for the first time. "How old is that child?" she asked suspiciously after my tiny nine-year-old demonstrated her Mozart. I assured her that she was just short, not too young for the school, and would be ten in plenty of time before the session started. (Apparently the program was so popular that parents tried to sneak in underage prodigies.)

Kinhaven, with its glorious setting in the Southern Vermont mountains and its dedicated staff of child-friendly, gifted musicians, changed my daughters' lives by opening up for them the world of chamber music in a way that was not available to kids their age, even in our musically sophisticated metropolitan city. As a ten year old, my daughter got to play Prokofiev and Haydn's Quinten Quartet. I still remember her calling me from a payphone to tell me her repertoire assignment, which was almost unintelligible to me because her front teeth were missing at the time. "Momma, I'm playing 'Thifths'!"

Those two weeks in late August were the highlight of their year. Even now, in their twenties, my daughters speak of their Kinhaven years with emotion and reverence. Kinhaven was the idyllic place in their childhood that they longed to return to. Many mornings, even throughout their teens when those days were long distant, they would come down to breakfast sighing, "I had a dream I was back at Kinhaven..."

The pint-size ten-year-old grew up and went on to study violin performance in college. She attended Kinhaven's junior session for five years, from ages ten to thirteen (the last two years she played viola for variety.) There she formed musical relationships that have stuck tight for over a decade. These are her friends for life. Her old Kinhaven buddies are now scattered at every major conservatory. Some have won international competitions. One recently won a major orchestra audition.

As she grew older, my daughter went on to attend a long list of summer programs. (We got better at making tapes, too.) You name it: ENCORE, Bowdoin, Quartet Program, Aspen, Heifetz... and the list goes on and on. Each was a valuable experience in its own way, but none of them reached the level of magic of those early years at Kinhaven. These programs are expensive, particularly the longer ones, and we had to forfeit family vacations and even borrow to fund them. At the time, I was convinced that they were necessary for her development as a musician, although in retrospect, it's unclear.

Many summer programs focus on ensemble music with limited time to work on individual repertoire. Even when you have several private lessons with a teacher, it's hard to make a meaningful difference in your playing in only six weeks. As soon as you start making real progress, the summer's over, and you leave feeling as if you've barely begun made a dent in what you set out to accomplish. If you have technical issues in your playing, a "guest" teacher is unlikely to presume to address them, at least not without prior permission from your home teacher. You might be better of, financially and musically, just staying home and practicing in your room.

On the other hand, summer programs expose you to conductors, coaches, and teachers, whom you'd never run into in your hometown. And the opportunity to make music every day with other kids who love music as much as you do—that's a life-saver for young musicians who feel isolated among their peers during the school year.

When they were at Kinhaven my daughter and her friends used to lie out at night on the tennis court under the stars imagining what it would be like if they could all go to school together during the rest of the year. A group of kids, living, studying, and playing together, united by their deep, common and uncommon love of music. Maybe some day they would get to live like that.

Maybe now they do.

Mine is going to Curtis this summer and is very excited about it. It sounds, from your experience, like it will be well worth it!

Of course I and all the girls remember you so fondly! I have photos of you with them. One thing about Kinhaven that I wanted to work into the article (but it didn't quite fit with the flow) is that the faculty has a very low attrition rate. It's the same wonderful staff year after year. That says something about the quality of the program. Thanks for all that you and the other staff have done for children throughout the years.