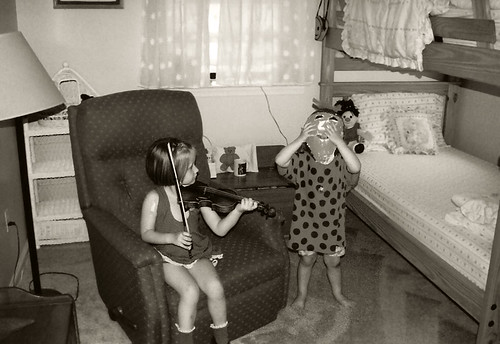 Was it only four years ago when we last gathered? The air at graduation was celebratory: kids in their comical headgear, and the families in their Sunday-best, ready for pomp, circumstance, and auld lang syne. We were all awash with relief following the long, difficult audition season. Remember how future felt? Bright, yet opaque. As the graduates hugged one another, they wept, joyous, sentimental, and a little afraid; soon they would scatter towards the unknowable future.

Four years later, told from today's perspective, each story unfurls, as if pitched by the steady arm of fate. The international star, the also-ran, the triumphant underdog, the tragic lost soul, the stolid learner. As with any narrative, when considered in retrospect, it seems to us now that events could not have happened any other way.

And here we are again: another commencement tomorrow. In the mental map of one's life, the college years are a large country, a continent, even. So much energy, psychic, financial and physical, devoted to preparing for the time you spend there. Yet, in reality, this space is brief.

I've been teaching in colleges for over twenty-five years (although in my own mental map, that's a smaller country than my own four college years.) And every May my seniors (wasn't it just yesterday that they were callow freshmen?) express astonishment that it's suddenly over now, this momentous part of their lives; now they're spat out into the world.

Shouldn't college be longer? Six, maybe eight years? You wonder, how could these kids be ready for life, in so little time? One thing about the culture of conservatory programs is that college generally does last more than four brief years. A few land jobs, or leave the profession, but most continue to a master's program for another couple years of performance study. At the beginning of her senior year, my daughter made a decision to go straightaway to grad school.

Four years ago when she was a 17-year-old applying to undergraduate conservatory programs, I was there for her. I made spreadsheets to help her organize repertoire lists. I booked the accompanist and the hall for prescreening tapes. I pushed the buttons on the video recorder. I downloaded the footage and formatted it with hair-raising difficulty on my balky iMac. I even walked the DVD packages to the post office. I completed the FASFA, IDOC, and CSS forms. I made flight and hotel arrangements and booked on-site accompanists. I took off from work; carried the suitcases; paced the hallways with bananas and water bottles at the ready. I dealt with the financial aid offices. I wrote the deposit check. I'm pretty sure she couldn't have done it without me.

To my eyes, my daughter seems the same as four years ago. Same looks, same sense of humor, same kid, same. Wishful thinking for a parent who leans away from the bittersweet moment of their child's absolute independence. This time around, however, she told me about her plans over the phone. I had little persuasive input about her choices. And why should I, after a four-year hiatus from involvement in her musical life? She arranged her own prescreens, recorded them herself, and uploaded them from her own computer to the audition web portals (the dread home-made DVDs having been made obsolete by advances in technology.) As an afterthought, she forwarded me the files for my own listening, which I did at my computer a hundred miles away, hearing this repertoire for the first time. She made her own travel plans, booked accompanists, and got herself to auditions and back carrying her own water bottles and bananas. I never had to miss a day of work.

What a difference, four years. "That was easy," you say. And on one level, it sure was, and it was great to see how well she handled the choreography of this large project, while simultaneously keeping up with lessons, classwork, rehearsals, and her paid fellowship work. On the other hand, my private anxiety level skyrocketed as the month of April approached—much as it had four years ago. This time around, without my input, she'd applied to only a few ultra-selective programs on the theory that if she didn't get in it would be wise to take a gap year, prepare harder, and try again. A plan that had seemed prudent in October felt suddenly precarious in March. If she didn't get in anywhere, or received no funding, what would she do? The future seemed opaque.

When my kids were little—I had four babies in seven years—they were teetering in four different directions at all moments. I remember thinking how much less fraught my life would be when I didn't need to worry about the mortal perils of tumbling down stairs or aspirating un-halved grapes. But my friends with grown children told me, "Parents never stop worrying; you just worry about different things." Puh-lease, I thought, imaging their cushy lives. You don't need to be on constant high alert; you get to sleep through the night.

Of course, my friends were right, although at the time, holding my fretful, sleep-resistant infant, I would never have been able to imagine a distant future in which I'd be up all night wondering when this infant would hear back from Yale.  "How did you survive the anxiety?" I asked a fellow music-parent, whose daughter had done the grad school application circuit a year before.

"Nerves of steel," was her reply. I think she was being ironic.

I don't have nerves of steel, except in the story I tell myself, in retrospect, in the bright light of the day-after when it seems suddenly obvious that the story could not have turned out any other way.