I hated the idea of frittering away precious violin lessons on something so straightforward as learning how to sight-read, so when my kids were small I taught them at home using the I Can Read Music series. By the time we'd worked our way through Volume 2 (with me tootling the duet part on flute) each had a pretty good working knowledge of pitch, rhythm, and key signatures.

But despite having completed both books, and despite her apparent comprehension of the elements of musical notation, one of my daughters still had difficulty sight-reading. The extent of her struggle did not become obvious for a very long time because she had a quick ear and could memorize a passage if she heard it once or twice. If she floundered during a lesson, the teacher would correct her and she'd mimic his demo perfectly. Thus, for years, she got by, undetected.

In retrospect, I see there were signs that she was different. Her reaction to music had always been extreme. For example, we could not listen to bluegrass music in the house because the harmonies elicited in her a painful sensation of thirst. That's right: bluegrass fiddles make her thirsty. And she seemed to find unbearable sadness listening to music in a minor key. Luckily, most early Suzuki repertoire is written in happy keys, but at five she would weep as she played "Gavotte in G Minor". I remember watching her during a lesson, aghast and fascinated as tears spilled alarmingly onto the varnished surface of the violin. I could barely make sense of her torment; no music had ever moved me this profoundly. The teacher simply shrugged and said, "Okay, next let's play a happy song."

But most foreign to me was her consistent claim that music had color.

"I can't read these notes because the colors keep changing!" she'd protest, as if she'd been assigned a cruel and impossible task. I'd walk over and stare at the sheets on the music stand. Black notes on white paper.

"Just concentrate," I'd sigh. As parents often do, I lived in that precarious spot between denial, frustration, and bemusement, trying to balance what I knew to be logical and true against her insistent demonstrations. We believe that we are empathetic, but the basis of empathy is an assumption that our personal experience of the world is universal. I did not see colors when I heard musical pitches or keys. How could it be that she did?

By contrast, her sisters accepted her assertion that she perceived color through music, and to some extent they claimed to share it. While driving, I would listen to their absurd banter in the back seat of the car:

And so forth. There were similar arguments concerning the colors of letters of the alphabets and days of the week. In my heart I believed these confabulations were a form of sisterly competition, and I'll admit they irked me. For one thing, the argument was never-ending: how could anyone prove, in the end, the true color of G Major or the letter E?

My daughter said she loved playing thirds, which to her evoked the warm colors (red, orange, yellow) of Starburst candy, a sweetness she could taste with her ears. But, she insisted, the colors of minor chords were musty earth tones, like paint with black pigment mixed in, and these gave her a desolate feeling.

As she grew more advanced on her instrument, she was no longer able to get by as easily on her excellent ear. Teachers and coaches grew understandably impatient, even irate, at her apparent inability or unwillingness to sightread. It was suggested that she was unprepared or careless. But she was not—music meant more to her than anything in life. It was suggested that she had a learning disability. But she did not have academic difficulties in school. Try explaining to a doctor that your only complaint is an incapacity to sight-read Shostakovich. First world problems, indeed.

When I was a child I spent a lot of time wondering what it would be like to have another sense. But just as a congenitally blind person cannot fathom sight, I could never imagine what this sense could be. Having an extra sense would inform every other sense, providing new meaning and depth to my interpretation of the world. It might go something like this:

"When there are multiple musical voices interacting with each other, complexity accrues" (as my daughter, now in her twenties, told me recently.) "The bass gives grounding and context, and the effect is intensified by the presence of the inner voices. When our quartet played a chord together, we might be purple (cello), red (viola), orange (violin 2), and yellow (violin 1). Then if we shifted up a third, or into a minor key, the cello would stay purple, but I [viola] would go from red to orange, and the violin from yellow to blue. When a violinist shifts a fourth, she jumps across the color wheel."

In quartet she played viola, gorgeously, but her inability to quickly connect with the printed score drove everyone crazy. She had one coach, a woman who'd struggled with learning disabilities in her own youth, who took time and tremendous effort to help her; under this coach's mentorship my daughter's quartet performed on From The Top's radio and TV shows, and in venues like Carnegie Hall and the Kennedy Center. But not every coach was as patient or understanding, and I could not blame them.

One day while my daughter was in a lesson at her teacher's house in South Philadelphia, I sat in my car in the sun in a loading zone near the Italian Market reading Oliver Sack's Musicophilia, a collection of essays on the intersection of music and neurology. The windows were rolled down; it was warm, and there was faint spoiled vegetable stench in the air. I mention the sensory details of that moment in the parking spot because my own particular brain forever weds a moment of epiphany with the setting in which the realization came to me.

When I got to the chapter on synesthesia, my heart began to race. Here, in black letters on creme-colored paper, in the words of the most popularly famous neurologist of our time, and published by Alfred A. Knopf, was a precise affirmation of everything my daughter had insisted, since early childhood. Everything, there in print. I felt a soaring sense of validation on her behalf. And I owed her an apology.

My daughter continued to study and play for the rest high school; in fact, she spent an extra year in high school in order to switch directions, as it became clear that she was not headed for a conservatory.  But when I suggested to her that her synesthesia was a disability that had hindered her progress as a musician, she disagreed: her experience of music is so rich, deep, and beautiful that she would never trade it for an ordinary, flat perception. Like mine.

She took a direction in her life that would have been as unimaginable to us when she was young as her relationship with music is to me. Now an artist who works primarily in glass—colorless glass that becomes a lens through which to interpret the world—she is preparing her first solo show, her BFA thesis exhibit, titled Chromesthesia. For her, music remains the driving force in her life's art. The opening's tomorrow. 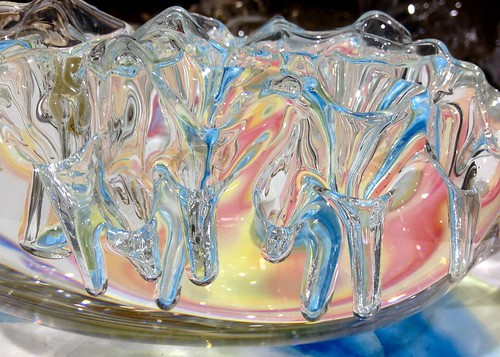 From Christina C.
Posted on May 9, 2014 at 3:06 AM
Wow, that's amazing. I've heard descriptions of synesthesia from folks who have it but never in the context of how it actually acts as a hindrance to music-making. Thanks for sharing and while it may have been a long & twisted road, it sounds as though your daughter has ended up doing exactly what she should be doing.
From 108.202.151.151
Posted on May 9, 2014 at 2:32 PM
I like your choice of graphics for the end.
From Karen Rile
Posted on May 9, 2014 at 5:38 PM
That's actually a photo of one of her glass pieces!
From 210.195.224.103
Posted on May 10, 2014 at 2:30 PM
I had always envied my classmate who had vivid imaginations of great scenery when listening to music, but your daughter's situation is something else. It sounds like things turned out wonderfully for her.
From Cristina Haines
Posted on May 13, 2014 at 2:01 AM
I'm also a violinist with synesthesia. I sincerely hope it's not a disability, but I definitely like some pieces more than others because they stay more monochromatic to my mind's eye. It can be difficult to make sense of complicated violin music when you're thinking not just aurally, but also visually. There is always something in me saying, "That isn't right. That's too many colors at once. You can't just go from yellow to purple like that. Let's try to paint a more rational picture here, progressing from one color to the next in a sensical way." And it doesn't work. I end up overthinking the music, I guess! Now from a composition standpoint, I wouldn't be surprised if people started writing synesthetic music!

From 24.5.196.89
Posted on May 13, 2014 at 5:39 AM
I wondered if she had synesthesia when I read Blue Grass made her hungry! My daughter has it and it WAS a hinderance when learning piano. She thought many of the chords were ugly and tried rewriting them herself to make them "look" better. Then she switched to trumpet and all is well.