On Being A Natural (not) 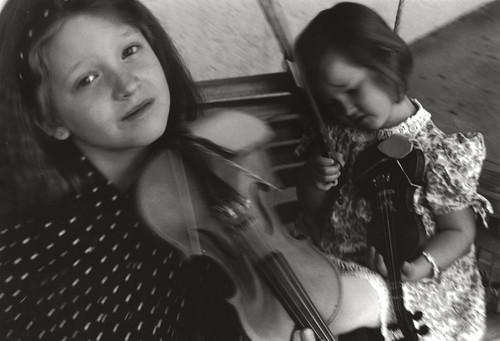 Dear Readers,
I'm back from a mid-week journey to New York where I watched my youngest daughter perform in a terrific production of playwright Mac Wellman's postmodern version of Antigone. I've got a column in the works on letting go, but it's not quite ready, so I'm offering instead this essay, which appeared first, in slightly shorter form, in the Philadelphia Inquirer on December 2, 2012.
--KR

Me, I want to be a natural. I want to show up at the first class and discover I have a knack for whatever it is we’re going to study-- pottery, Japanese calligraphy, racquetball, oil painting, flute. I want to be the one the teacher praises and the other students look up to. I don’t mind work -- as long as it comes easy, with guaranteed results. But, as it turns out, I’m usually the class dunce, or at least that’s what it feels like as I struggle to keep up after the going gets tough. Eventually I quit, loathe to spend precious effort on what could be a mediocre outcome.

But my four daughters turned out differently. They don’t think about talent, because it’s beside the point. Like the proverbial tortoise, they make slow-and-steady strides in disciplines that are difficult for them, eventually surpassing more gifted hares. They weren’t born this way. Their approach to learning came about as a lucky accident.

When they were little, it seemed like a good idea to expose them to a smorgasbord of opportunities, so I encouraged them to dabble in this and that. Gymnastics, t-ball, dance, science museum classes-- the usual lineup of Saturday kiddie activities. When the oldest was in kindergarten, she had a whim to play the violin, so I signed her up for lessons at the neighborhood Suzuki school. I thought it was cute: the little wooden instrument with its old-fashioned varnish smell, and all the children standing in a line, squawking away at “Lightly Row”, just enough off-pitch to sound comical to my ears. Some musicians I knew warned me that “no great violinist has ever come from the Suzuki tradition.” Fine by me-- I wasn’t looking to raise a violinist, just a well-rounded kid.

Gradually, inexorably, and for more than a decade, those violin lessons took over our lives. The younger one wanted to copy everything her big sister was doing, and soon we had a two-year-old strutting around with a tiny violin case, like a miniature Mafioso. I was pregnant at the time, so the baby learned her Twinkle Variations in the womb. As soon as that baby could talk, she, too, demanded a violin. And so it escalated, until we were juggling four weekly private lessons, four group classes, and hours of parent-assisted practicing every day of the week. The house was littered with various sized violins. I learned to play piano with my hands behind my back, so I could keep an eye on their posture, and accompany them as they practiced. Those Suzuki melodies drove me crazy. I’d wake up in the middle of the night in a cold sweat with “Gossec Gavotte” stuck in my brain on endless loop. At the time, I wasn’t even sure why we were doing all this, only that it seemed crucial in some way I could not define.

Let me be clear: my family was not naturally suited for immersion in the Suzuki method. We’re not joiners. My oldest, an inquisitive and highly verbal child, asked so many questions during lessons that her teacher suggested we have her tested for ADHD (we declined.) The little ones had meltdowns in group class, or refused to open their instrument cases at their lessons. They did not exactly embrace the idea of daily practice. You might wonder, what three-year-old does? But, from the impeccable behavior of the other children in group class, I would have had to say: plenty. Of course, the coterie of families who participate in these programs is self-selecting: they tend to have bright, docile children with nimble fingers who enjoy practicing repetitive tasks. We, by contrast, struggled.

But we stuck it out. They practiced every day, and, lo and behold, progressed. Two of our four turned out to be musically gifted and before long were shuttled out of Suzuki to hard-core classical violin teachers. The baby, now age six, was so in love with music that she was practicing for hours every morning before school. Her new teacher put her on a steady diet of dry 19th century études to reform her technique. This difficult work she embraced with joy, because the habit of daily practice and steady incremental progress had been ingrained in her from infancy. I doubt that she or I would have had the heart to steady that rigorous course without the foundation that had been laid out for both of us by our accidental immersion in the Suzuki world. She’s now a violin performance major at Juilliard.

Flash forward twenty years from that first Suzuki lesson, and three of my four kids have put away their violins in favor of other pursuits. But those early lessons stuck. All four have had the courage to embrace long-term, large scale projects outside the realm of their formal academic training. Each of them credits their Suzuki days for engraining in them the habit of patient practice that has seen them through the long, slow development of mastery.

Sure, talent matters. Talent is the difference between good art and great art, between proficiency and virtuosity. But talent matters a lot less than we tend to believe, and talent alone is rarely enough to get by. In our culture, we have Romantic notion of the artist as a formidable, congenital genius. Obsessive focus on talent alone creates a hobbling anxiety of failure. How many of us are discouraged from trying because we were told we are “tone deaf” or “can’t draw a straight line”?

So forget about talent. If I had a nickel for every parent who told me that their own kid was a “natural” at music, dance, or whatever, but never got anywhere because he didn’t like to practice, I could take everybody out for lunch. Teach your kids to practice. Practice something difficult and complex, where the rewards come slowly over time. It doesn’t have to be music, although music is perfect because it engages body and mind on so many levels. And it doesn’t matter if they’re naturals; the lesson’s more profound when they are not.

From Jennifer Kendrick
Posted on April 11, 2014 at 3:15 AM
This is a great post. Focusing on talent is not needed. The time spent focusing on talent could be better distributed in practice most definitely. I would bet that a person would see themselves improve and enjoy their music more.

I think, if I were a teacher, I wouldn't let a child know they were talented. I would, of course, nudge them along to boost their confidence with hints on progress. I would be afraid that the word would get to their head and change their experience.

Thankfully my teacher teaches Suzuki method but more of a supplement to learning. I have seen some videos of teachers and I would go nuts haha

From Edward Kreitman
Posted on April 11, 2014 at 1:48 PM
This is an excellent article describing exactly what Dr. Suzuki always intended. The life lessons learned through the study of music are much more important than becoming a professional musician. However, I wish that we could stop regurgitating the idea that "no great violinist has ever come out of the Suzuki tradition." This was not true 20 years ago...and is even less true today.

While it was not Dr. Suzuki's intention to create professional musicians....thousands of them have come out of the method in every country where Suzuki method has existed long enough for children to come through the program.

From Rick Lohmann
Posted on April 11, 2014 at 3:03 PM
This is a great story, and well written. It speaks to the reasons I am a violin teacher, and a Suzuki violin teacher. I will re-post for my students' families.

I appreciate Ed Kreitman's comment about not regurgitating the myth that the Suzuki method has produced no artists. I am also careful to not reflexively pass along the notion that there is a bright line between "Suzuki teachers " and "hard-core classical violin teachers." I consider myself to be both, and even as I am writing this can think of dozens of colleagues who are very definitely both. The two categories are not mutually exclusive.

I direct everyone to Mark Bjork's excellent "Expanding Horizons: The Suzuki-Trained Violinist Grows Up" (Summy-Birchard/Alfred or whoever they are now).

From Karen Rile
Posted on April 11, 2014 at 3:29 PM
Thanks, everyone! I should add that a week ago I got to hear one of my daughters play her senior recital at Juilliard. She's been working--very hard!
From elise stanley
Posted on April 13, 2014 at 7:25 PM
Love your blog - so delightfully written and also such an important point. Slow and steady wins the race, tortoise and the hare - its been said so often but somehow our culture is rooted in the opposite; the notion that greatness can be seen if not at birth, a few months thereafter. Why? Well its really a romantic notion and maybe we have something in us about inherent superiority - isn't that what Kings, Queens and Lords are about? And, of course, it provides a ready excuse for one's own failings.

From David Allen
Posted on April 14, 2014 at 1:31 AM
This is wisdom!
Congratulations on your achievement!
From 60.241.40.33
Posted on April 14, 2014 at 8:15 AM
This is a wonderful history and thank you for sharing. My daughter plays violin and is still learning the art of practice at the age of 11 (and I guarantee she'll never make it to Juliard or any such conservatorium of music…) but this article brings home why learning an instrument such as the violin, even at a rudimentary level, is a 'good thing' for children to do. The discipline of practice is a transferable skill.