A Parents' Guide to Conservatory Auditions, Part 16: On Cockeyed Optimism 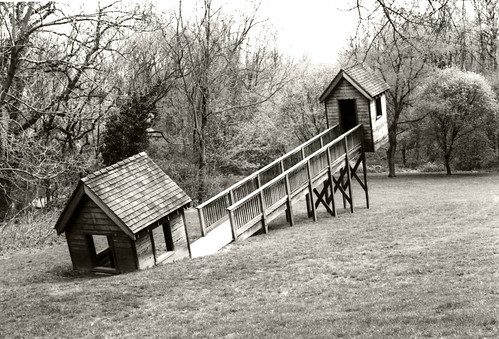 Ah, but a man’s reach should exceed his grasp,
Or what’s a heaven for? --Robert Browning

When I was a kid, I came home from school one day and found a new book on the coffee table. It seemed pretty dull, except for the mod-looking lower-case red-and-orange typeface on the title:

That sounded to me more like an instruction manual for dealing with deranged robots than something that would belong to either of my parents, a couple of former art history majors whose shelves were otherwise packed with beautiful art and design books.

Psycho-cybernetics, turns out, was on loan from my grandfather, who'd recently returned from stint overseas as a civilian engineer in the air force. That was his second career, which he embarked on after early retirement from the telephone company because he wanted to travel the world. Now he was working on his third career: living to age 100. Living to age 100 was practically a full-time job for a retired man in his late sixties. A meticulous researcher, he'd designed for himself a strange-seeming low-triglyceride, low-impact diet-and-exercise program predictive of nutrition and exercise fads that would become fashionable thirty years in the future, as he grew close his goal.

The third prong of my grandfather's live-to-100 plan was psychological. He believed in positive thinking, hence the Psycho-Cybernetics, which my mom excitedly explained to me, was all about improving performance by visualizing positive outcomes. She brought up the example of a basketball player who practiced by vividly recreating a game in his head. According to the book, this technique helped improve the outcome of his real-life game. "Positive thinking, it's important!" said my mom, herself a natural optimist. "Your brain is your most powerful organ."

While my grandfather was busy visualizing longevity and excellent health, I tested out the theory in math class. Turns out, actually doing the homework problems is a better predictor for a good grade than merely daydreaming about one's triumph over algebra. I had similar luck when it came to the imaginary practicing of Czerny etudes for my mercurial Viennese piano teacher. Visualizing didn't help—well, nothing did. No matter how much I practiced or slacked; no matter how much I visualized or suppressed, I was never going to play well enough to please my teacher. I was her studio dunce. Later, against better judgement and the advice of friends and family, I tried out for the 7th grade basketball team. By night, I lay in bed imagining myself nailing jump shots in front of cheering crowds. By day, I froze in terror on the rare occasion anyone even passed me the ball. For good reason I was cut from the team before the first game.

When I got to college, I took a psych class with Martin Seligman, a popular professor. At the time, he was busy promoting his theory of Learned Helplessness, which struck a deep chord for me. Those wretched caged lab dogs, shocked and rewarded randomly, grew depressed because they quickly learned that nothing they could do would predict or affect their fate. I could feel their pain: it was like Czerny all over again.

Years later, Seligman wrote a series of best-selling books and achieved national prominence as the father of the Positive Psychology movement, which looks at the idea of Learned Helplessness from the other side of the glass. Learned Optimism suggests that, through the practice of cognitive behavioral techniques, you can teach yourself to reinterpret and reframe experience in an optimistic way, leading to a more positive future.

The implications of these sorts of theories for performing artists—or for that matter for anyone engaged in pursuit of a goal that depends on self-reliance and risk-taking—are tremendous, which explains the popularity of these theories and their many spinoffs. You can do it! Shake a tree and it will rain down pop psychologists and motivational speakers hawking books about positive thinking. No, you can't!  Shake another, and dodge the deluge of naysayers against the bright-siding of our culture.

A few days ago, the New Yorker blog ran an opinion piece by NYU marketing professor Adam Alter, "The Powerlessness of Positive Thinking", which got me to thinking back to the days of

In his essay, Alter shoots a few fish in a barrel—fluffy self-help "manifestos" that are unsupported by scientific evidence. "Like religion, they offer an appealing, non-technical solution to life’s biggest problems while demanding nothing more of their adherents than faith." Then he cites the work of his NYU colleague, social psychologist Gabriele Oettingen, whose controlled experiments suggests that positive fantasies are an impediment success...and maybe even lead to economic downturns.

Alter quotes London School of Economics management professor Heather Barry Kappes, who bluntly charges, “Imagining a positive outcome conveys the sense that you’re approaching your goals, which takes the edge off the need to achieve,” and journalist Oliver Burkeman, whose recent book, The Antidote: Happiness for People Who Can't Stand Positive Thinking, posits, “Ceaseless optimism about the future only makes for a greater shock when things go wrong; by fighting to maintain only positive beliefs about the future, the positive thinker ends up being less prepared, and more acutely distressed, when things eventually happen that he can’t persuade himself to believe are good.”

So which is correct? Does optimism truly narcotize one's drive to achieve? Does it really put you off the Triple Package path? For one thing, I would like to point out that there's a difference between passive, complacent fantasizing and active optimism. When my grandfather was in his mid-sixties he hoped to live to 100 and—spoiler alert!—he did, and a bit beyond. But he got there through a combination of optimism, yes, and planning, self-discipline, and good luck (great genes, no airplane accidents.) My mom, whose theme song when I was little was "Cockeyed Optimist" from the musical South Pacific, overcame an economically deprived childhood and physical challenges to become the first college graduate in her family (an Ivy League, at that), and then went on to a long entrepreneurial career in a field so difficult that few of her colleagues managed to swim along beside her through the years. Oh, and somewhere in the mix she found the time to raise four kids. Knowing what I do now about life, I look back at what she accomplished in amazement. She did it because, despite what other people told her about her limitations, she didn't believe that she could not.

I'd probably describe myself as a hopeful pessimist—or, perhaps, a realist—at heart. But, growing up, my mom always pushed me outside of my comfy shell. I learned early that when I release my imagination and take a calculated risk, I am occasionally rewarded splendidly enough for my courage that it mitigates the disappointments of my ventures that fail. That's why I encouraged my own four daughters to cultivate some calculated cockeyed optimism, to take the occasional risk that requires them to step outside their "place".

When my violinist-daughter was a high school senior, her violin teacher advised her to aim for the stars. She applied only to "reach" conservatories, no safety schools. When I heard about this advice, it made me nervous—well, what if she didn't make it? But her teacher had also prepared my daughter with excellent instruction, and this my daughter had responded to, in turn, with tenaciously hard work. The gamble paid off, or it has so far, at least. If I live to be a hundred (not one of my personal goals, by the way) surely, I'll witness some ups and downs. Every life has them. But the ability to look beyond your circumstance and imagine the better thing, and the courage to put your plan into action, that is what will get you there.