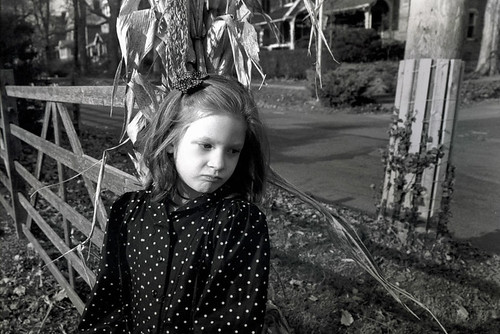 One minute you're a violinist, practicing and rehearsing six days a week. Then, boom! A giant project gets dumped in your lap at work, or your elderly parent has a crisis, or it's Thanksgiving and 37 people are coming for dinner.

One minute you're the parent of a violin kid, and then boom! She breaks her arm in a fall from the uneven parallel bars, and it's six weeks or more in a cast.

When your routine gives you pleasure and purpose, being wrenched away feels significant. You worry you'll never return. Or that if you do return, you'll have lost your mojo.

When my daughter was eight I got a call from another parent telling me to come immediately to the emergency room of the local hospital. I arrived, heart banging in my chest, to discover that she was okay, except for a broken right arm. Her gymnastics coach, who knew she was a violinist, greeted me with the words, "I'm just afraid of what her violin teacher will say!"

Six weeks is, of course, a very long time when you're eight. But the time-out also felt monumental to me, even though I was old enough to know a thing or two about the passage of time. I was worried that my daughter would lose all of her carefully earned facility on the instrument. Only practice on the days that you eat, my kids' first Suzuki teacher had intoned. What if she forgot all her skills and found herself back at square one, miserable and frustrated?

We had organized our family's routine around practicing, rehearsals, and lessons (not to mention 8 hours of gymnastics practice every week.) Now, all of that was gone. What would we do with the extra hours? After a few days we settled into our new normal of sleeping later, reading more, watching TV. It was relaxing, but I felt uneasy. We'd been on some kind of treadmill and now we were off. Was the violin-phase of our lives now over? (Gymnastics sure was, after that accident.)

Six weeks later, as promised, the orthopedist removed my daughter's cast and told her that it was fine to resume practicing; in fact, he said, the bowing motion would be excellent healing therapy for her arm. When we got home my daughter asked me to help her unpack her violin. Gingerly, she took up the bow, supporting her right arm with her left at first. Then I handed her the little instrument. Her sheet music was waiting for her on the stand just where she'd left it six weeks earlier. She placed it the on the string and began to play: a wobbly sound that grew slowly fatter. Tears streamed from her eyes. It was as if she'd never stopped.

I'd never wish a broken arm on any child, but for my daughter (and for me) the experience was a great lesson. Because everyone gets blindsided now and then, and it's good to know you can come back.

Over the years my daughter, like many violinists, has had a few of setbacks that kept her from practicing, sometimes for weeks. The timing was always terrible, often an injury as a result of over-practicing towards some goal, which would then need to be abandoned. Recently, she developed arm pain after practicing too hard in preparation for a competition at her college. The doctors told her the injury wasn't serious but prescribed healing rest. Her teachers and dean advised her to drop out of the competition. Forget it, they said. It's just a small blip in a lifetime of healthy playing. She knew that her teachers were right, but the time-out was more painful than the injury itself.

I'm sitting in my room and all I want to is practice, she texted me. That was a few weeks ago. Now her arm is healing and she's back. The disappointment is behind her.

A successful comeback after an unplanned hiatus give you courage to plan some well-timed sabbaticals. An occasional break from routine gives you the opportunity to rest, recharge, and to expand your mind in new directions. A couple summers ago my daughter had an chance to spend a few weeks backpacking in Europe after an orchestra tour. At first she worried about how she would manage to keep her instrument safe and to practice during her trip. The logistics of dragging a violin through a series of youth hostels and small aircraft seemed so daunting that she decided to leave her instrument in London while she traveled. It worked out fine. Within a month she was back in the US, refreshed and rested, and practicing again as though she'd never skipped a beat.

From 2.54.179.116
Posted on November 24, 2014 at 4:57 PM
In fifth grade I broke my right hand. Still, my teacher asked me to practice the violin only with my left hand:) it seems quite logical now, but it was'nt back then (At least for me).
very nice article:) made me reminisce a lot.
but most importantly, reminded me that sometimes a break can be healthy and necessary for various reasons. In fact, some of the greatest violinist have had some break in their career. Thank you:))