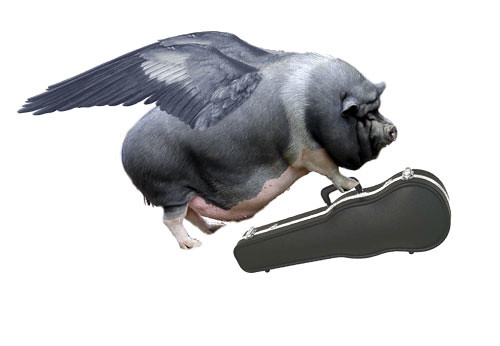 Carry a baby down the aisle of an airplane and passengers look at you as if you were toting a machine gun. Imagine, then, what it’s like travelling with a one-year-old pig who oinks, grunts, and screams, and who, at twenty-six pounds, is six pounds heavier than the average carry-on baggage allowance and would barely fit in the overhead compartment of the aircraft that she and I took from Newark to Boston. Or maybe you can’t imagine this. —Patricia Marx, from "Pets Allowed"

Riding downtown on a crowded commuter train the other day I was snorting and snuffling with barely controllable laughter. The man beside me edged away; then he got up and changed to an empty seat. What a sourpuss. Well, he should be glad at least I left my alpaca at home.

I was reading Patricia Marx's essay, "Pets Allowed" in the current issue of The New Yorker. Marx, a humorist, is one of the magazine's best writers. In this piece, as a social experiment, she successfully escorts a series of increasingly ridiculous creatures to increasingly absurd venues claiming that they are Emotional Support Animals (E.S.A.s).

She totes a turtle to see the Vermeers at the Frick Collection, where I once had to practically stand on my head to get my calm, serious, tall-for-her-age 9 1/2 year-old admitted. (The minimum age for the Frick turns out to be 10.) A turkey gets seated at a table in a New York delicatessen. An alpaca scores an Amtrak ticket. The clincher, of course, is Daphne, the 26 lb baby pig (too big for the overhead compartment) who gets VIP treatment—she sails through TSA—on a plane trip to Boston.

You can see where this is going. It was easy for Marx because her pig didn't bring its viola.

From Lisa Fogler
Posted on October 17, 2014 at 8:31 AM
Excellent Karen! Poor violas. But, even a violin gets you the third degree. It's easier to bringa pig on a plane than it is a violin! I think I will register my violin as an "Emotional Support Item". I have a psychological need to fly with my violin!
From 82.38.226.175
Posted on October 17, 2014 at 7:41 PM
I notice that in the blogs some responses are anonymous, which on this forum is nothing to worry about because all that has happened is that someome has probably forgotten to log in before submitting their response.
From 50.246.244.138
Posted on October 17, 2014 at 9:17 PM
I agree with the previous poster...we must label our violins, violas, etc. as