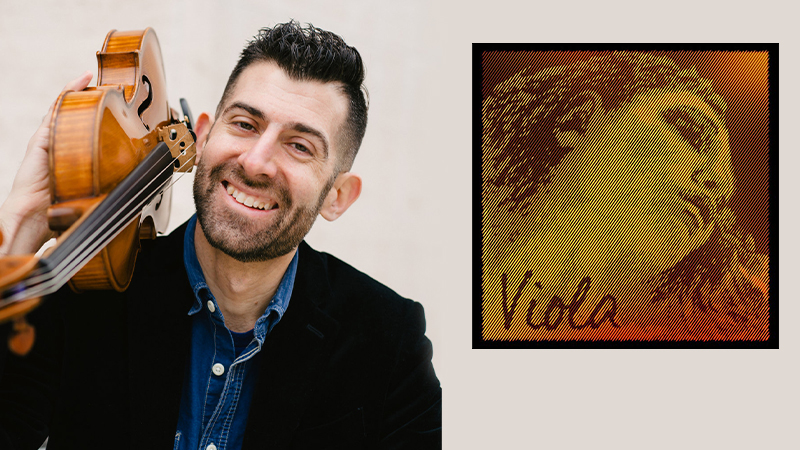 For full disclosure, I was offered these strings for review from the 2022 NAMM show, but my opinions are my own. Although I received them in January, I had some concerts in the spring and summer for which I was nervous to change things up. I finally put these on in August, and have been playing on them ever since, for about four months.

Normally, I use Passione strings, also from Pirastro. I discovered Passione strings several years ago when I started playing on a newly-made viola. I found that the strings in the Passione line, which have a treated gut core, found a sweetness and depth of color which brought the new instrument much closer in sound quality to a fine older instrument. This didn’t surprise me, as gut strings were the standard for centuries.

As a student, I had been told by more than one teacher that Eudoxa and Oliv strings (both containing gut cores) were wonderful for tone. When I tried them out, however, I found the pitch instability to be frustrating. So I was pleased to discover that Passione strings have much more stability. But "more" stability doesn’t mean that there isn’t a lot of tuning when playing on the Passione line, especially in humid weather.

Enter the rope-core Evah Pirazzi Gold set. I was startled at the stability of these strings. After an initial break-in of only 2 days, these strings kept their pitch with great consistency. I have Wittner geared pegs on my viola, and these strings respond easily to the unique way that these pegs function. I find that when playing in a rehearsal, I will typically tune the strings at the start of each rehearsal half, but rarely have to touch them in between.

All this stability, however, is moot if the strings don’t sound good. Over the last four months, I have had a chance to try the strings out in live chamber music, solo and orchestral recordings, and live orchestral performance settings. My initial impression of the strings were that they were full and spoke loudly without much effort.

At first this was a challenge – I had a film soundtrack recording the second day I was using them, and controlling the quieter dynamics took a bit of effort. However, after another day or two they settled in nicely and I found that they were responsive at both loud and quiet dynamics, in some cases allowing for more coloristic range in quieter dynamics than the Passione strings I am used to.

For viola, an instrument built with certain acoustical challenges, having a clear sense of the sound is critical to hearing and adjusting pitch. I found the rope-core Pirazzis to be confidence-building in that regard. The sound has both "width" and punch, a good combination in my mind. It is nice to feel that when I’m playing loud or solo passages, I have room to shape the line in the upper end of the dynamic range without easily reaching the upper limit. Ultimately, I have become a real fan of these strings. I think they compare well with Passione for color and expressive range, but they are less work to keep in tune, and they seem unlikely to break.

I also remain satisfied with the set after four months of use (that I didn’t remove them after a week should tell you a lot about my impression of them!). I assume they will lose some of their brilliance in the next couple of months, but they have lasted longer than I expected them to.

The C, G, and D strings sound even across their ranges, and from one string to the next. The A string in the set, made of chrome-wound steel, is the least distinctive, but matches the set well. Ultimately, if these strings become widely available, I would strongly consider making them my primary set. I might swap out the A for a original Larsen (my go-to), but otherwise I find the new rope-core Evah Pirazzi Gold viola string set to be a joy to play on and a welcome addition to the Pirastro string catalog.

December 20, 2022 at 12:34 AM · Thanks, Jonah Sirota, for an enjoyable and informative review! I'm wondering if I should consider trying such premium synthetic strings to replace the Tonicas I recently put on my newly-acquired Scott Cao violin?

I have been playing only gut strings for most of my 7.5 years on violin, because I'm focused on early music. I have 2 violins strung with gut now, tuned to A=415. But just a few weeks ago, I was invited by our church organist (in whose choir I sing) to play some hymns on the violin. I didn't want to change my 2 "baroque" violins so I went to a Sam Ash music store and, after tuning all 8 of their used violins, selected the Scott Cao violin for $310...with receipt in the case showing it had sold new for $480 in 2012. So my "church violin" might also be a "cheap violin," but it was the best-sounding in the store, and I also bought a set of Tonica strings for it, which I've tuned to 440 to match the pipe organ.

Until only 2 weeks ago, I'd never played violin for strangers. Besides my teacher, only a few family members have heard me, practicing in my lonely room. Also, I had been trying to learn "harder" music but because I only played for myself, alone, there was no pressure to slow down for best intonation and tone, mistakes didn't matter and I just kept turning the page and hacking into new pieces.

But now, in the gorgeous acoustics of a church full of people who hear me, I'm suddenly in a very different mindset about how to practice and what my sound goals are. "Simple" hymns must be made to sound as perfect as I can get them. I don't ever want to blame my equipment for what are really problems with my technique...but I'm wondering if I should indeed spend $100+ dollars on premium synthetic strings to replace the Tonicas? Would such a change be worth the money on a student violin? There's certainly nothing wrong with the violin, and there's plenty of room for me to grow as a musician, but would I sound better with "better" strings?

December 20, 2022 at 04:10 AM · In my teens (1960's), Olives were the best strings. So when I purchased my first violin in decades about three years ago, I spent a small fortune considering nothing else. But believe me, that's ancient history now.

My most recent violin, which is quite a nice instrument, came with Peter Infeld Pi Strings, except the E. (The E was an Infeld Red that's gold plated stainless steel.) Absolutely beautiful sound from these strings! You get both stability AND beauty.

Not having been played in decades, as this most recent violin emerged from it's hibernation, I found that the Infeld Red E wasn't quite enough. So, I replaced it with the Peter Infeld Pi E that's also gold plated stainless steel. At a little higher tension (and higher volume), it added just what was needed.

At some point, I might try Rondos, which my luthier tells me are also good strings. But even if I never improve on the Pi strings that I have, I'm still a happy clam.

Of course, violins are different from violas. But, it looks like both Peter Infeld Pi and Rondo strings are available for viola. I very much like the tone of my "G", "D", and "A" Pi strings. They might be worth a try.

December 21, 2022 at 04:22 AM · Hi Will! Tonicas are good strings; they are less expensive than Evahs but they should sound good on a student violin. If you had truly cheap, low-quality strings then I would say that having decent strings would make a difference, but Tonicas aren’t in that classification. That said, every violin is different and if you can do a little experimenting, you might particular strings that really suit your violin. They might be more expensive, but maybe not! I have three different violins, all with different kinds of strings on them!

December 21, 2022 at 02:36 PM · Thanks Laurie, I was pricing these Evah Pirazzi Golds just last night. And I was doubting the sound quality of my Scott Cao violin with new Tonicas...or else I'm doubting MY sound quality. But because I keep practicing carefully and slowly to try to get best tone, I just took the $100+ gamble that the Evah Pirazzi strings might make a difference. I had a coupon with my local shop that didn't cover the Gold set, so I'm trying the regular Evah Pirazzi's with gold E string. My first set of premium synthetic violin strings! Whatever their exact effect, this will be part of my education as a violinist.

December 21, 2022 at 05:22 PM · I have some regular Evahs on my Hiroshi Kono and they sound great. Dealers often put those original green Evahs on violins to help sell them because they sound so goo!, So I think you will be happy! I love the Evah golds on my nice violin but I more often use Obligatos because they are a little quieter.