Jesus Rodolfo Rodriguez: the viola, a never-ending story of beauty

November 22, 2013, 9:46 AM · Recently I attended Jesus Rodolfo Rodriguez’s viola recital. How tasteful, how classy it was, what a magnificent musician he is! He attacks the piece and doesn't let it go until everything is said, until he brings you into the warm and into the cold and everywhere in between. Love, Beauty, Fear, Dreams...he is an incredible storyteller. He plays with the greatest sensitivity and the most beautiful sound, and takes an unconditional pleasure in sharing his music. 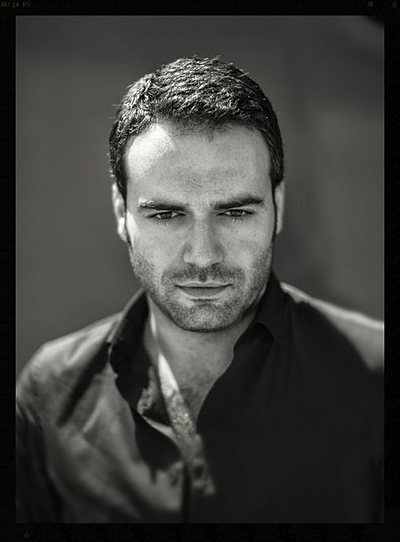 Jesus Rodriguez started the piano at 4 in his small city an hour from Oviedo in Spain. He said he loved it right away. He was listening to Walt Disney’s "Little Mermaid" and "Beauty and the Beast" and could play the tune on his little keyboard. To add to the fun, his grandmother soon offered him the family’s grand piano.

At 7, because he has perfect pitch, he started playing the violin. Unfortunately, after a few years, his violin teacher, Wieslaw Rekucki – who was like a father to him – left the city, and Jesus had to go to Oviedo every weekend for his lessons. But even more regrettably, the new teacher who came to his hometown discouraged him from continuing the violin, so at age of 12, Jesus didn’t want to play the violin anymore. Then his teacher in Oviedo brought a viola to his next lesson. “He played the beginning of Walton Viola Concerto and of Schumann’s Märchenbilder,” Jesus said, “and I couldn’t believe it, it was just so beautiful! I loved viola immediately: it was dark with a soulful sound.” After few months, the young boy left the violin for the viola. The same year, he made his first piano concert tour by playing the two Liszt concertos. “I was young and it was just so much fun, as much as playing video game," he said, “it was also very glamorous.”

Jesus’ parents never wanted him to be a musician. At the time, they said they would let their son play music if he would study another subject like architecture, medicine or law. Therefore he moved to Madrid, where he attended the renowned architecture program at the Universidad Europea de Madrid. “Studying architecture helped me to understand the fundamental mechanism, structure and discipline of everything. When you create a structure, you really have to be synthetic, simple and pragmatic, but in a very complex way. It’s the same when you learn music, especially the viola.”

At 17 years old, Jesus went on tour with the Bartok Viola Concerto. The same year, the young musician won a major competition in Spain, being the first violist ever to win it. Then later, he got an Erasmus scholarship to study architecture in Paris for a semester. While at the same time, he tried to audition for the Mahler Orchestra in Vienna and got in as assistant principal and subsequently as principal.

Jesus moved to America to learn under the guidance of Jesse Levine at Yale University, where he also studied piano and architecture. He remembers he was basically practicing and drawing all day and loved it. In addition to that, he was going to Vienna once in a while to play with the Mahler Orchestra. When he finished Yale, he went to New York to study viola with the great Paul Neubauer. It was a dream he'd had since he bought Neubauer’s recording of the Walton concerto after his teacher in Oviedo played it for him.

“Studying with Paul Neubaeur changed my life. He is such an amazing violist! When I met him, I decided to stop the piano to focus on the viola. We went over all the concertos and all the sonatas together. Even when we are not in the same country, we would send each other emails and do online lessons. He is surprising me all the time. I learn every day, and it isn’t just a matter of the way he plays, it’s how he teaches me to be a better person.” In the meantime, Jesus became an architect, after presenting his final project in Madrid. “I may not practice it, but I love it. I guess one day I will design my house in the mountain or on the beach.”

The handsome Spaniard also played British music for Queen Elisabeth of England and Henry the 7th at Windsor Castle. He won a competition and was endorsed by the designer Tom Ford, who dressed him for a year. In the next days, inviting by the German ambassador’s wife, he will play Schubert’s lieder for the famous writer Andrew Solomon.

Jesus assured me he has tried many things but doesn’t always succeed in everything he undertakes. However, if he doesn’t win, in his mind he doesn’t lose, as long as he learns something. “You have to be unique and special and bring something different. You have to be improving all the time and grow up as a musician, this is really what matters.” As if he was a camera, Jesus says he watches everything around him while trying to be very centered and focused on his own person. He likes challenge and always finishes whatever he starts, no matter how long it takes.

“No matter how hard something is or how far you think your dreams are, if you work very hard – I mean very hard – if it’s what you are meant to do, go for it! For me, viola is the thing that makes me the happiest, that makes me feel the most beautiful.” He continued: “When I discovered the viola, it was something very special because it was so close to what I am and what I experienced in my life: so deep, so intellectual," Jesus said, “and this sound, this intimate sound, which is the closest to the human voice.”

You can play almost all the repertoire of the violin, the cello and the voice on the viola. Fascinated by the qualities of his beloved instrument, Jesus likes to play special repertoire, taking something here and something there, and doing transcriptions. “Obviously, transcriptions are not working all the time. But if the transcription sounds as well or better on the viola than on the original instrument, it’s worth it.” For Jesus, the viola has the right to shine and needs the opportunities to do so. He would like to introduce the instrument to people in a different and creative way. According to him, there are lots of great violists but there is not yet the figure of the viola as a rock star instrument – like Paganini or Liszt were. The lack of knowledge and the physiologically very hard approach to the instrument is not helping its cause.

“I really want to make the viola rise as a superstar instrument. It’s daring and risky but certainly doable! It’s the time! I actually see myself playing Schnittke Viola Concerto in the Yankee Stadium with a lot of lights and crazy outfits. People might think it’s about marketing and what can I say, you have to sell the product, but the quality will always be there. Actually the quality of playing is very important, but once you have it, it’s like ok what else?”

“I want to love, I want to eat, I want to buy shoes, I want to do many things in my life. But overall, I want to play music.” Jesus is not surprised to have set his sights on the viola, as he has always loved difference. When he was little, if there was a weird guy at school he always wanted to be his friend. He feels there is something special and beautiful to get from difference and the viola is certainly a never-ending story of beauty.