Of meteors and music: in memoriam, violist Vladimir Mendelssohn (1949-2021)

August 19, 2021, 4:09 PM · A clear sky above the Rocky mountains graced summer meteor showers in all their August glory as a group of musicians at the Grand Teton Music Festival gathered to observe a tempest of shooting stars in happy camaraderie. To those unacquainted with the beauty and force of the shooting star phenomenon, brief flashes demarcate a trail of light in a process that is as magical as it is mysterious. Suddenly, the spell was broken as cell phones indicated a frantic flurry of messages. Colleagues at the Kuhmo Festival in Finland, a musical paradise indelibly marked by Romanian violist Vladimir Mendelssohn’s vision, shared the unbearable news: the Festival’s director extraordinaire had passed away unexpectedly. The musical firmament stood still in shocked silence. 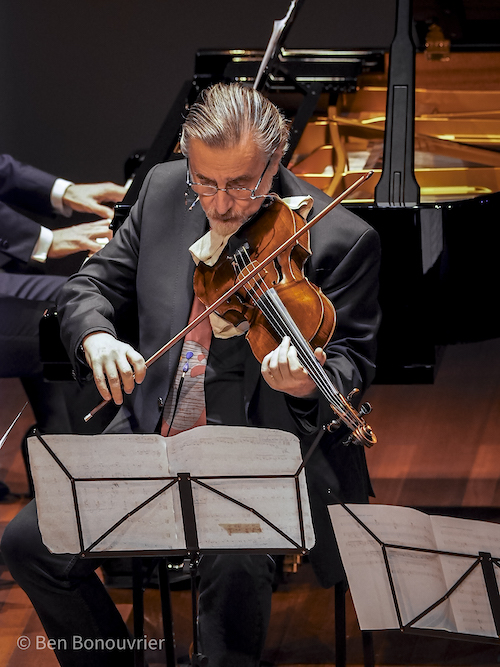 A tireless, versatile musician in the largest sense of the word, Vladimir (Vladi) Mendelssohn’s performing career spanned every possible aspect of musical life -- from principal viola positions in his native Romania (Bucharest Philharmonic Orchestra under the legendary Sergiu Celibidache) to solo and chamber music performances the world over.

Stifled by the repressive Ceausescu regime, he fled to the Netherlands in the 1980s with a notoriously primitive viola and a cello bow. Fervently holding to the tenet, "it is not the instrument but the soul of the musician that shapes the sound," he remained faithful to that instrument for decades. To quote the great Russian conductor Lev Markiz, "I don't know another case that would confirm the truth more - sound is primarily a product of the ears, hands and pillows of the performer's fingers. And his heart." Everyone who collaborated with Vladi or had the joy to listen to his performances corroborated that he ennobled the sound of his viola and turned it into a phenomenon that reflected his personality.

Soon after his arrival in the Netherlands, Mendelssohn was appointed principal viola at the Hague Philharmonic, with the visionary Hans Vonk at its helm. Seeking new dimensions in musical life, he soon took leave of the safety of a prestigious orchestral career to turn his prodigious attention to chamber music, pedagogy and composition. In the week that has passed since his demise, former students and colleagues have shared stories about a musician whose "warm velvet viola sound could suddenly turn into a hurricane," a man who "held the power to change the atmosphere during a rehearsal for the better with one small phrase, one aptly placed comment."

Ever fervent in his pursuit of truth and musical expression, Vladi travelled incessantly between a mind-boggling number of yearly engagements, while always making time to teach students at multiple conservatories including the Conservatoire de Paris, the conservatories of Rotterdam and the Hague and the Hochschule in Essen. Incessant travel often translated to frenetic, puzzling timetables as a former student recounted, "Vladi moved mountains to arrive on time, literally taking every conceivable manner of transportation, leaving in the middle of the night and juggling schedules just to give a last minute coaching session to a student in need. He never, ever let his students down, even if this meant he might arrive to perform a concert at the very last minute."

Humility, nobility, exquisite skepticism and sharp intellect are four traits repeated in a mantra of love and respect by all whose lives he touched. He exuded fearlessness and great love and there was no separation between the man and his music. Pianist Nino Gvetadze, a frequent chamber music collaborator disclosed, "You could talk to him about almost anything and he would give you honest advice. It is difficult to tell one story about him as he himself was a story and we were all part of his world. He was almost a godfather for so many of us. His special character, beautiful playing, unique sense of humor, the ability to read people and understand everything with just one look, his love for music, strength and passion, incredible talent, all these sums up to just one word---Vladi."

Wouter Vossen, the eminent Storioni Trio violinist shed light on Vladi’s ability to transform a potentially difficult situation into a positive meeting of minds and hearts. "When Gidon Kremer asked us to perform Schnittke’s Piano Quintet at short notice, we responded enthusiastically. After all, to welcome Kremer to perform at our festival in a piece he loved dearly was an amazing musical opportunity. And then, reality hit: the Storioni Trio had never performed the composition, and the piece was very challenging. Our beloved festival violist assured us, 'No problem, have patience,' and set to work. Vladi showed up to our rehearsal with the score and individual parts covered in colorful sticky notes. A collage filled with useful information gave us a road map from which to construct a valid, personal interpretation. His ability to grasp the score in its entirety, parse details and communicate was uncanny; he saved the day, simply, quietly and completely.

To share in Vladi Mendelssohn’s kaleidoscopic vision and prodigious breadth of knowledge, see his program notes for the 2021 Kuhmo Festival (click here).

A message from Marian van den Berg, who has played professionally in the Netherlands for the past 25 years: "with great joy" echoes the feelings of many. “There is one very important person who made my youthful dreams to become a musician come true. Vladi is that person. He was a genius of a teacher. If I couldn’t find the way to play a passage, he would devise a way to unwind and solve musical and technical problems. His students were very diverse: some very intellectual, some very intuitive, some who chose the viola as a sort of starting point on their way to other fine jobs in the musical landscape; some very much into the viola with a live long commitment to the instrument. He took a different approach to each and every student. Vladi gave us the ability to develop and discover ourselves. Because of him, I became the person and musician that defines me today." She revealed two nuggets of golden advice from the master: approach an audition with managed expectations, "do everything in your power, but expect nothing." And if disappointment takes the upper hand, always remember, "there are thousands of illusions that will not become reality, but in the meantime, hundreds will come to fruition."

A prolific composer, Vladi Mendelssohn leaves us with a large oeuvre of compositions. Take a moment to listen to his orchestrated arrangement of the Shostakovich Sonata for viola and strings, Op. 147, with Lev Markiz conducting the Nieuw Sinfonietta Amsterdam:

Through his music and his unforgettable presence, the firmament is moving closer to us musical mortals. Rest in peace, Vladi Mendelssohn.

August 22, 2021 at 02:08 PM · "Sound is primarily a product of the ears, hands and pillows of the performer's fingers. And his heart." I will burn these words into my brain lest I ever forget