String Quartet Biennale Amsterdam 2020 in a blaze of glory

January 29, 2020, 7:12 PM · The second edition of the String Quartet Biennale Amsterdam (SQBA) has a mighty challenge to overcome. After a deliriously successful first edition, any attempt to move beyond that superb week of concerts two years back is accompanied by high stakes. A quote from T.S. Eliot bears repetition, "only those who will risk going too far can possibly find out how far it is possible to go."

Treated to the opening lineup of concerts followed by more than twelve hours of musical encounters the following day reassures the listener that the SQBA has indeed surpassed its early ambitions. From the gleeful explorations of youngsters in Amsterdam’s Leerorkest (Learning Orchestra) to chestnuts performed by international greats, the new decade is promising for string quartet aficionados. 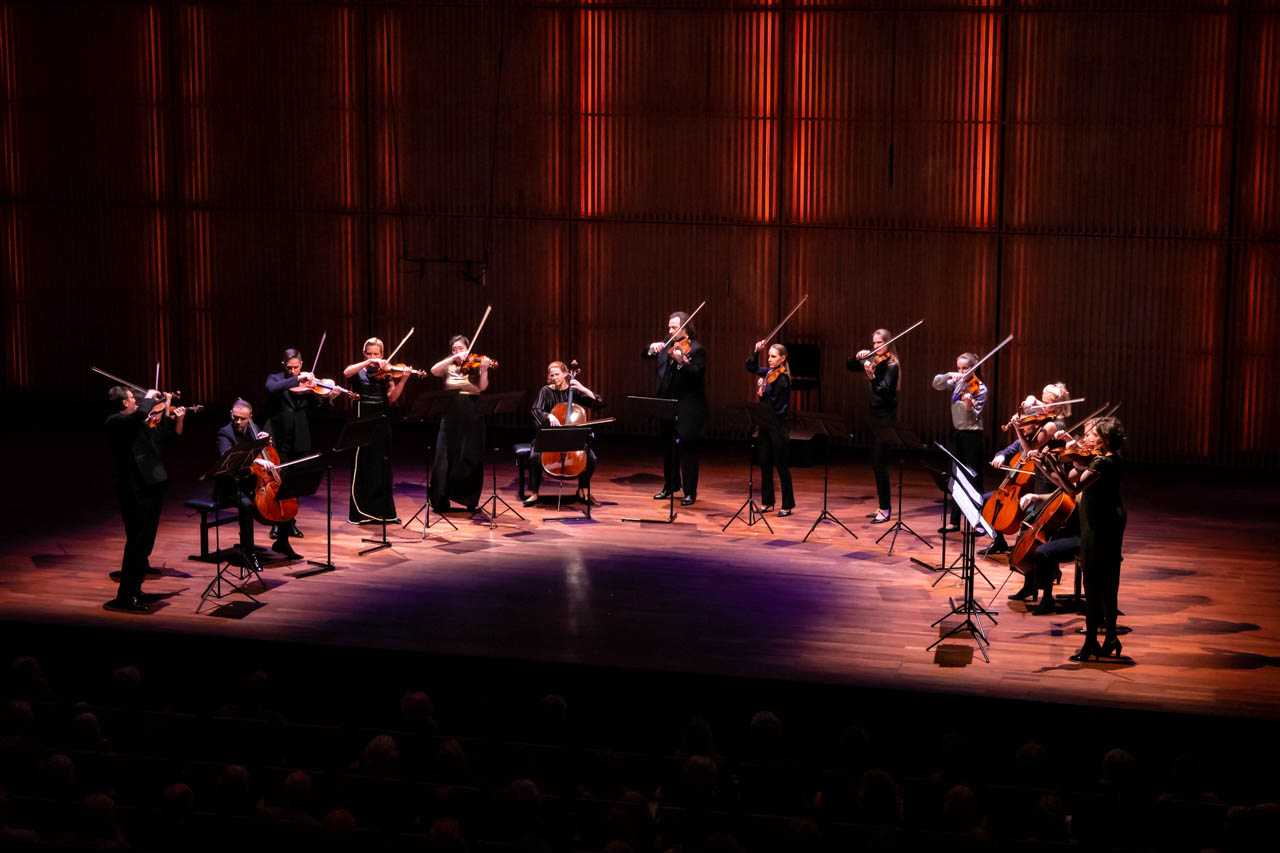 No less than thirty-six string quartets and assorted composers, speakers and musical colleagues meet up in Amsterdam with wide-ranging programs, masterclasses and "coffee talks" curated with indefatigable care by the SQBA’s gracious and creative founder, Yasmin Hilberdink.

Welcoming the opening night crowd with warmth, she indicated that a surprise was in the making and sure enough, sixteen quartet musicians from the Artemis, Dudok, Jerusalem and Ragazze quartets burst on stage for a rollicking rendition of Johannes van Bree’s Allegro for 4 string quartets, a Mendelssohnian happy beginning.

One could not think of a more dramatic contrast to the gleeful initiation than the ebb and flow of grim counterpoint and harmonic pain etched in the pages of Bela Bartok’s last quartet. The formidable Artemis Quartet thirty-years in the running gave a focused, brooding performance of a work composed in the catastrophic year 1939. The Artemis in its latest incarnation with several comparatively "new" members opted to perform (with the exception of the cellist) standing. What was missing in terms of ferocity was compensated by an eerie acknowledgement of the indecipherable in Bartok’s melancholy (Mesto) slow movements. As intense as their Bartok and as wayward their approach to Schubert’s massive quartet in G major D.887 -- that somehow got lost in its own harmonic translation.

For what the Jerusalem Quartet referred to as the "hard core" audience members, this year’s SQBA presented Late Beethoven performed at a late hour, following the 8:15 evening concert. The Jerusalem’s showed their incomparable sense of timing in Beethoven’s op 132; the musical prayer of thanks that imbues the third movement with heavenly optimism was especially memorable.

Integral to the SQBA is a commitment to growing the listener’s musical understanding: musicians feel free to offer informative nuggets of information about the works performed. At Sunday’s opener, members of the Finnish-based Meta4 Quartet joined bassist Niek de Groot, who recounted: "Ninety-nine percent of the elevated chamber music repertoire has been written in the last few decades: the concert presents gems from the one percent." Humor abounded in satisfying arrangements of Rossini and Hoffmeister arrangements for two violins, cello and bass. Occasionally, differences in opinion concerning intonation marred the Rossini offerings--- the agile first violinist chose for sharp leading tones as opposed to her colleagues who remained steadfastly in the middle of the road. Sporting a brand-new bass "just six weeks young," de Groot shone in Franz Anton Hoffmeister’s Solo quartet nr. 2.

Part and parcel of SQBA’s progressive stance is its commitment to up-and-coming quartets. In the first of this year’s Grass Roots concert four quartets took center stage. Alasdair Tait , former Belcea Quartet cellist interviewed each group paying special attention to the human side to their stories. The concert opened with a luminous performance of Louis Andriessen’s seductive Garden of Eros (2002) in an impassioned reading by the UK-based Marmen Quartet (joint first prize winners Banff International String Quartet Competition 2019). Interestingly, the members spoke not only about the music but about the vicissitudes of string quartet playing----a young quartet at the top of the "grand slam" competition circuit that has changed members with regularity due to injury and other career moves clued the audience into the backstage drama that lurks behind the scenes for many an exalted string quartet. Their performance of Beethoven’s op. 95 "Serioso" was intense, coloristic and exciting especially satisfying in the upper strings.

The Dutch-based Dostojevski Quartet followed with a presentation of one of their favorite works, Prokofiev’s first quartet op 50 prefaced by the world premiere of the South African composer Wilma Pistorius’ Jitterbug Quartet. Sadly, a questionable choice of repertoire did not stand the young group in good stead. The Pistorius was much too long and pedantic in terms of thematic repetition to bear consideration as a worthy addition to the repertoire. Although the quartet fared better in Prokofiev, hearing them just after an ensemble of the Marmen’s class emphasized the considerable gap between conscientious performance and finely tuned artistry.

The second Dutch-based quartet, the Animato Quartet rose admirably to the occasion with a convincing performance of Frank Martin’s 1967 elegiac, dark palette quartet. Pairing Martin with very early Haydn stood the group in good stead. The simplicity of a beautifully wrought slow movement in the opus 2 no. 3 quartet was performed with delicacy and good taste. Definitely a quartet to keep track of in the near future.

The Goldmund Quartet, winners of the Melbourne International String Competition treated the audience to an extraordinary voyage: Haydn’s D major quartet no. 64, movements from Mendelssohn’s op 80 and the Dutch premiere of Holly Harrison’s Balderdash (2017) a brilliant piece that wanders between amplified feedback, white noise, phaser effects, disco beats and the real on-stage world of sound. Especially strong in the violin department, the quartet’s commendable ability to adopt quickly to totally different styles of playing is particularly noteworthy.

Conspicuous power and love of creating long phrases characterized the Artemis Quartet’s richly variegated performance of Tchaikovsky’s second quartet. Undergoing changes in personnel can make or break a quartet: the recent addition of cellist Harriet Kriegh and violinist Suyeon Kim and violist Gregor Sigl’s return to the quartet prove that exuberant individual musical personalities can carry on a venerable tradition victoriously. Sigl’s opening solo in Smetena’s Ma Vlast quartet brought back memories of an immortal recording by the Orlando Quartet with its unforgettable emotional outpouring by the late, great Ferdinand Erblich. 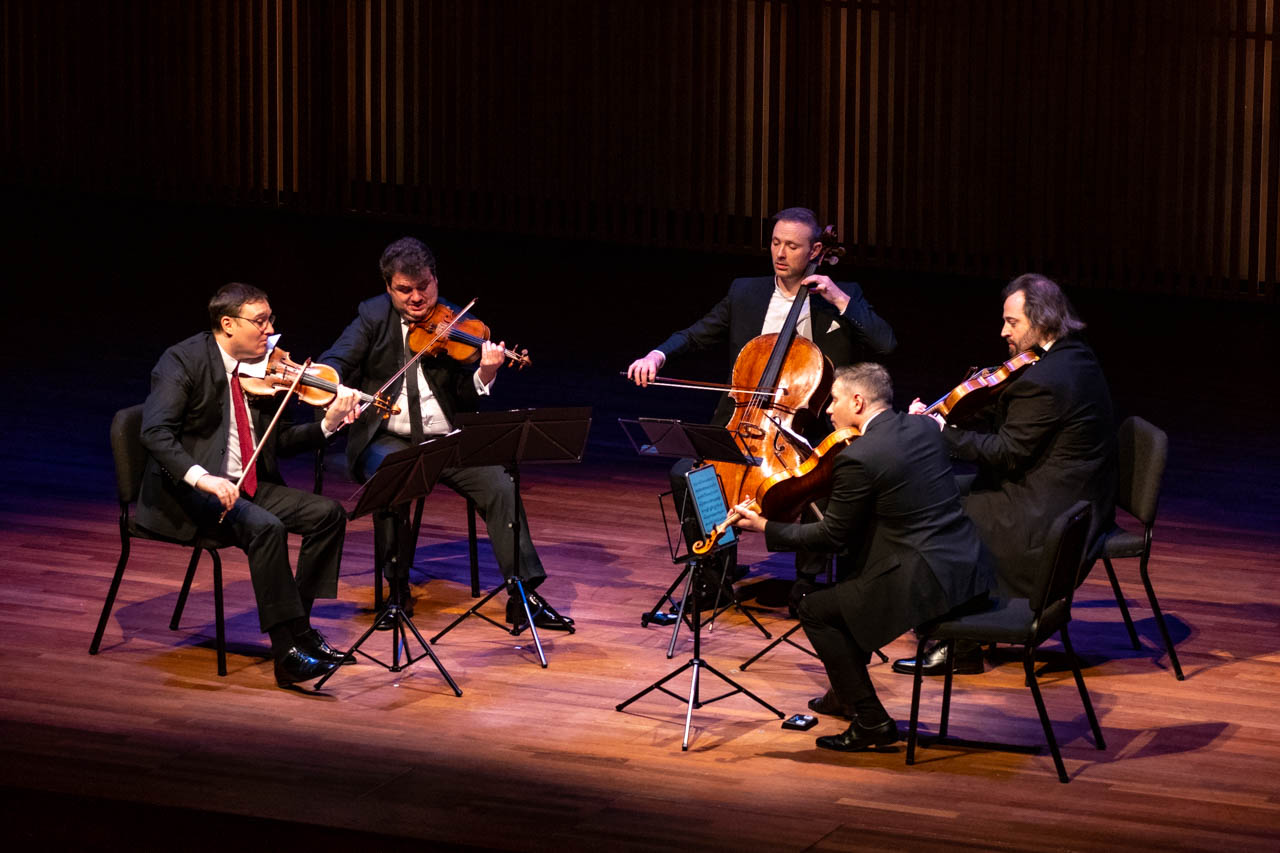 The Jerusalem Quartet, with violist Gregor Sigl of the Artemis Quartet. Photo by Ben Bonouvrier.

Once a time, a long time ago during a lull in a quartet coaching session on a very cold, wintry day in Banff, Canada, the spirit of Martin Lovett, the Wolf Gang’s inimical cellist (Wolf Gang was a nickname given to the Amadeus Quartet) defrosted a master class of daunted participants. The violin pedagogue, Thomas Rolston requoted : "Sing the tune when you play something humdrum and sing the accompaniment when you play the tune." The oft-repeated adage could serve as a golden thread for an absolutely extraordinary evening performance by the Jerusalem Quartet. It is hard to find a range of superlatives to characterize their renditions of Haydn and Bartok that preceded the piece de resistance, Brahms’ string quintet no. 2.

The Jerusalem’s brought forward the prophetic undertones in Bartok while never forgetting the atavism within a polyrhythmic jive. The allegretto pizzicato showed off the group’s panache, technical perfection and humor. Gregor Sigl joined for an exalting Brahms, singing throughout.

Onwards and upwards to an Extending String Quartet rendezvous with the pathfinding Turkish Borusan Quartet whose trials, tribulations and hard-won success in Turkey is the stuff of novels. If the opening weekend is anything to go by, the SQBA’s second edition has certainly broken its own record.

January 30, 2020 at 01:34 PM · Seems like Amsterdam really gets it with organizing mega classical and crossover events, we should go for this in the States too!!