February 4, 2018, 3:00 PM · The wildly successful Cello Biennale Amsterdam has compellingly established Amsterdam’s reputation as a convivial host to musical celebrations. The newest star in the city’s musical firmament, the String Quartet Biennale Amsterdam (SQBA) is ambitious, adventurous and every bit as festive as its renowned predecessor. The brainchild of Yasmin Hilberdink, the SQBA reflects her joyful obsession with, to quote the Juilliard Quartet’s late, great first violinist Robert Mann, “those four magic pieces of wood that we bring to life.” Realizing that creativity, simply put, breeds creativity, Hilberdink and her dedicated team of quartet aficionados chose fourteen established quartets to create a chain-reaction of musical events at the accommodating Muziekgebouw space.

From Early Haydn mornings and lectures by Alex Ross interspersed with learning moments with leading lights Louis Andriessen and Alfred Brendel,the SQBA broke new ground while traversing the tried and true in eight days chocked full of activity. “You can travel to any great hall to hear quartet concerts but active musicians almost never have the chance to meet one another and share ideas. Our dream at SQBA was to make this happen while opening the doors to a wide public.” 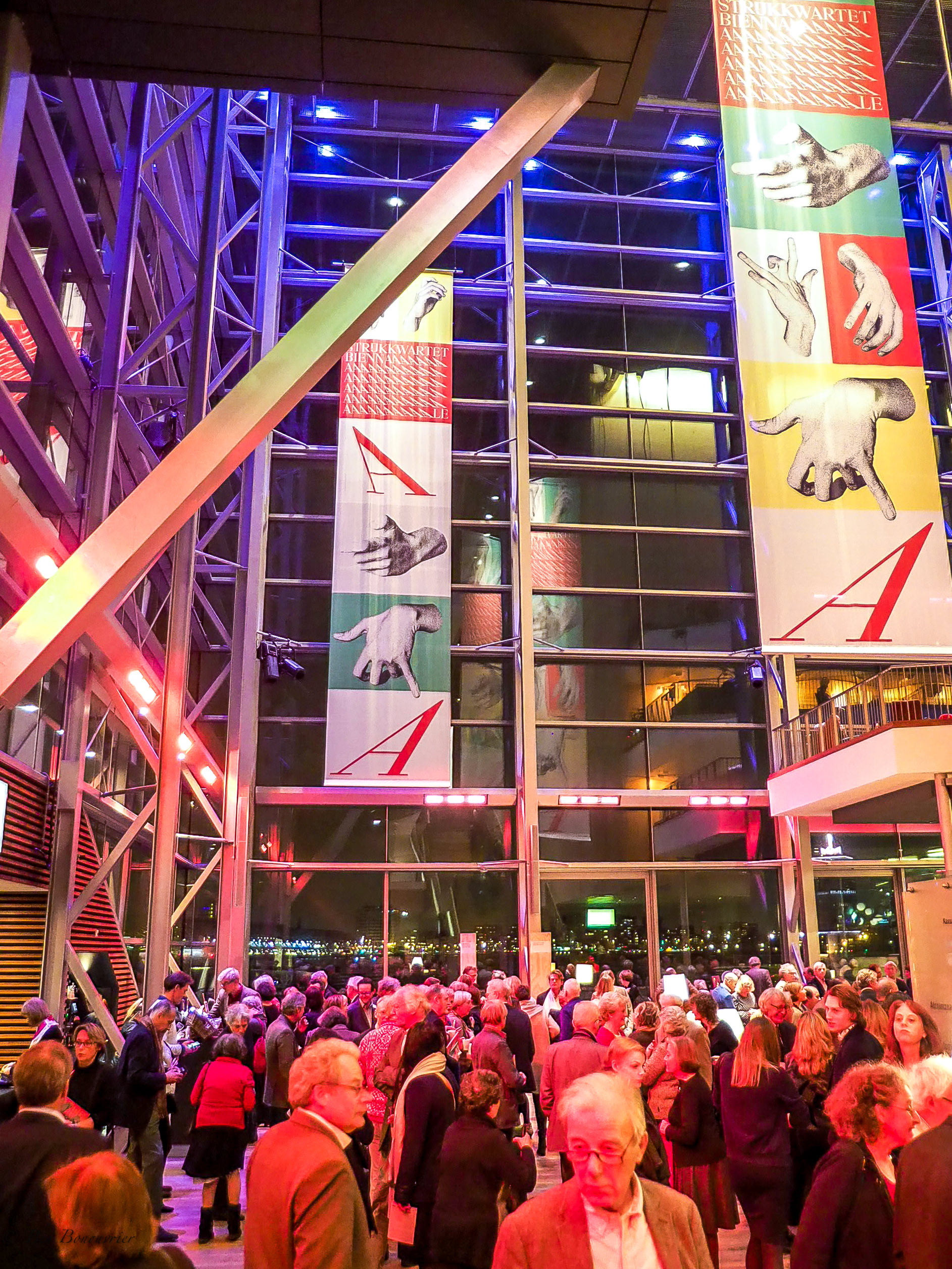 True to its promise of adventure, the SQBA’s opener expanded the musical mindset with the addition of clarinet to the quartet formation. The symbiosis featured the distinguished Hagen Quartet and composer/clarinetist Jörg Widmann. A quartet with more than three decades of performance experience, the Hagen’s excel in trust and consummate balance. A quartet of the traditional mode where the second violin takes a modest back seat to the first, their attention to detail meshed with Jorg Widmann’s flexible musicianship and highly exploratory vernacular. The concept of the scale gained new meaning reaching for the stratosphere with utmost delicacy. The Hagen-Widmann understated rendition of Brahms' Clarinet Quintet continued the misterioso mode set forth in the first half of the evening. Their subtle palette of dynamics and tempo diminution left the audience in rapt silence.

Quatour Danel launched the SQBA‘s Late Beethoven nightcap with the master's most elusive quartet, Opus 127. The Danel’s transmuted sound into storytelling. The trials and tribulations of the composer who observed “it will please them someday” after a less-than successful premiere led to a unique formula back in 1826: a double performance in which the audience was treated to the composition, twice. Perhaps a suggestion for the next edition of SQBA, a true post-midnight treat!

Sunday afternoon burst forth in sound with Grassroots, a program featuring young string quartets, prizewinners who have proven their mettle in the competitive arena. Each group chose a repertoire piece to present along with relatively unknown gems written by Dutch composers. Lengthy musicological introductions were offered in Dutch, lost in translation to the many international visitors attending. Level-wise, not all quartets were created equal. Highpoints in the afternoon smorgasbord were the Maxwell String Quartet’s exquisite interpretation of Joey Roukens’ Visions at Sea and the Noga Quartett's translucent Ligeti. Meanwhile in the Muziekgebouw’s small hall, the Ruysdael Quartet’s adept players probed the differences between performing on different instruments not only in terms of impact on the individual player, but the effect on the quartet as a whole and of course, the audience. A more effective presentation could have taken place if the musicians had spoken without the interventions of a presenter.

Speaking of instruments, the Quartetto di Cremona’s famed Stradivarius set was presented in during the group’s evening in the limelight. Yet, although glorious to behold, the instruments were not given free reign by a quartet constrained by a lack of inter-player dialogue. Schubert’s weighty String Quartet no. 15 with its extraordinary major -minor contrasts was given a straightforward rendition.The second half of the program added two acclaimed players to the group. While Emerson violist Larry Dutton showed visible joy at sharing the stage as second violist in Schonberg’s Verklärte Nacht and Gary Hoffmann, the compelling second cellist played three unforgettable leitmotif notes, the Cremona’s seemed ill at ease. The restless yearning of Schonberg’s youthful masterpiece as it moves from pathos to bombast escaped a group that spent too much time concentrating on ‘the notes.’

Balm to the soul was provided by the Signum Quartet’s ravishing, organic Beethoven opus 132. Playing as if they shared one and the same breath, the group showed how four can actually become one while casting a spell. First violinist Florian Donderer noted, “it is an incredibly long voyage, the string quartet process not to speak of approaching Beethoven’s late quartets. If we come to an understanding of this composition in forty years time, we are on the right track.” Magic at midnight, indeed!

In a round robin master class in which young quartets received insights on how to approach Webern’s Six Bagatelles, Philip Setzer hearkened back to one of his mentors, the legendary Juilliard Quartet violist Samuel Rhodes who stressed the link between rhythm and knowledge. “Master the math: once we musicians learn to count, we can never stop concentrating on meter, both internal and external.” The master’s advice carried through to the Emerson’s evening performance where tight ensemble was the order of the evening. Decades of experience informed a true-to-score rendition of Bartok’s Third String Quartet however the performance lacked the “take me to the edge of my seat” push. Switching gears to Webern, intellect and subtlety took the lead to underscore the larger gestures within Webern’s splintered score.

A midweek evening performance in which the Emersons and Cremonans joined in a performance of Shostakovich’s Opus 11 Two Pieces for Octet was more of a meeting of minds than hearts. The fundamental difference in sound production between the intrinsically stable Emersons and the ever-fluctuating Cremonans both in terms of pitch and sound intensity made for thought-provoking listening. The young Shostakovich’s experiments with extracts from his First Symphony that culminate in a hysterical frenzy brought the two quartets together in triumph. Guest artist Gary Hoffman stole hearts as second cellist in the Emerson’s forthright rendition of the Schubert Quintet. Closing night contrasted the pristine beauty of Quartour Danel’s Debussy and poignant Tchaikovsky with the post-intermission contributions of percussionist Evelyn Glennie and the O/Modernt String Quartet. Glennie launched into 12 minutes of deafening drumbeats before the O/Modernt intoned Purcell’s Chaconne in G minor. Light bathed Glennie while darkness enveloped the O/Modernt performers in a sardonic twist. While the O/Modernt players are profoundly gifted and extraverted individual performers, competition rules over conciliation in their performance practice. 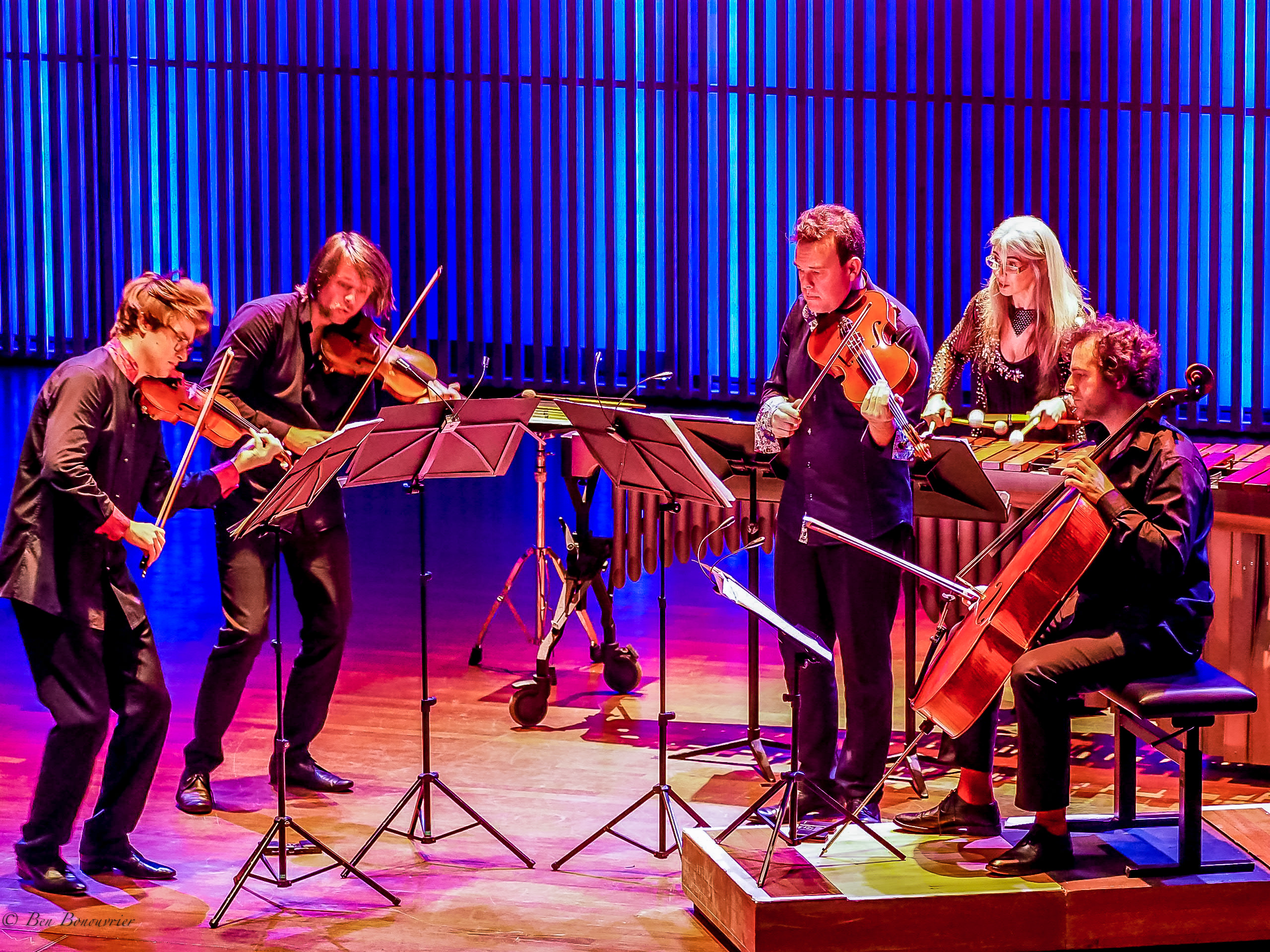 The 2018 SQBA has carved an important niche in the hearts and minds of all who imbibed in its potent mix of music and thought. No amount of prose can substitute for ‘the real experience’ of a day in the life at an unconventional musical celebration. The SQBA’s organization deserves heaps of praise for its careful attention to detail in programming and the dissemination of a thorough program book in both Dutch and English: underlying the creative force, control and calm.

Wish lists for future editions include venerated masters of sound such as the Jerusalem and/or Kopelman Quartets. Newfound audience enthusiasts suggested the addition of a panoply of quartets in an exploration of recent commissions with a tip of the hat to the Kronos Quartet or an experimental day of exploration with the likes of Steuart Pincombe (Music in Familiar Spaces). Onwards and upwards to 2020, when the SQBA will return to confront and delight!

of course they were not. The correct expression is “free rein” — think the reins of a horse, loosely held, not the reign of a monarch.

February 5, 2018 at 05:17 PM · Bill is always patrolling for Word Enforcement (has caught some good ones over the years for me) - In this case, I accept both explanations and let the wording stand! ;)

February 5, 2018 at 07:24 PM · Dear Heather, Thanks for your enthusiastic and well informed article. I missed some quotes of the Quiroga and Casals quartets, who both played a major role in the first Biënale.

And for the next Biënale there must be some space for historic informed playing classical quartet music as Mosaïques or Chiaroscuro.

Thanks for the beautiful pictures. Can’t wait for the next Biënale in 2020.

February 6, 2018 at 09:11 AM · Very sorry to have missed those wonderful groups, next time round will make sure to arrange my schedule accodingly! Point well taken with regard to historically informed performance,