January 21, 2018, 4:25 PM · The story goes that the great composer would wait, suitcase packed, coat in hand, anxiously opening the curtains at 5:30 am, the witching hour for secret police pickups and disposals. Convinced that his time had come as Stalin’s reign of terror decimated the Soviet Union’s intelligentsia, the man whose music healed so many hearts across so many borders lived in anxiety. The cure for his ordeal: survival through art, healing through music. Taking Dmitri Shostakovich as a spiritual point of departure, the ever-inventive Storioni Trio chose the theme Beyond Borders for the 11th edition of a festival that never ceases to amaze: the Storioni Chamber Music Festival 2018.

The trio’s uncompromising commitment to contemporary music is central to a celebration that redefines the experience of audiences and musician-participants, from renowned guest artists to young talents. The many meanings of border crossing were examined, explained, retranslated and brilliantly performed in music and word throughout the opening weekend.

Mingling with the public just before the start of one of the many ‘mini-concerts within concerts’ that transform the opening weekend into a true Grand Parade, Storioni cellist Marc Vossen enthused, “isn’t Nicholas Altstaedt great?” One cellist ‘bro’ lauds another at a festival in which love and humility replace competitive behavior and the audience is invited to connect.

At the Storioni Chamber Music Festival 2018, border crossing took on an expansive meaning beyond the physical act of entering a new territory. Schubert’s profound internal journeys and Haydn’s late-in-life discovery of an adoring public far from home in Britain were given pride of place alongside the musical voyages of present day refugees in their newly found musical safe haven, the Netherlands.

The Storioni’s plus coloristic master-violist Vladimir Mendelssohn took the audience on a rhapsodic journey with their enigmatic opener, Georges Enescu’s, rhapsodic Nocturne ‘Villa d’Avrayen.’ Lush harmonies and broadly expressive themes left the audience rapt in magical silence pondering the emotional borders to be crossed in the near future. Within minutes, Nicolas Altstaedt, clad like a Zen master strode on stage with the dapper Storioni violinist, Wouter Vossen. The robust vernacular of Kodaly’s folklore took the two on a wild ride. Hearts on sleeves spelled off by fascinating rhythms brought the idiomatic borderlands of the Hungarian hinterland home to Brabant as the dynamic duo bonded with their inner gypsy. 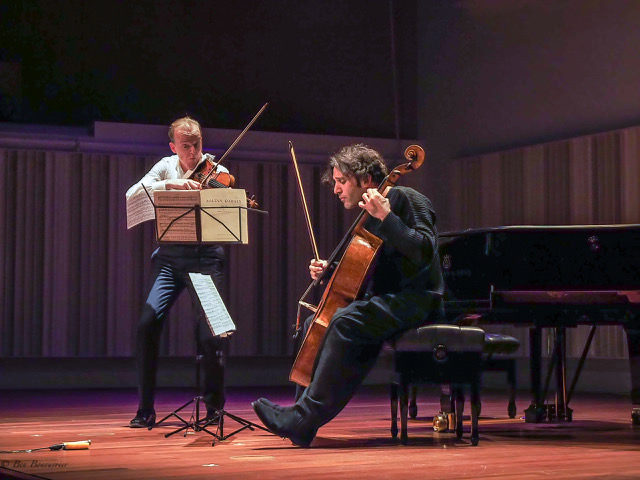 Joining the Storioni ‘family’ in Shostakovich’s epic piano quintet, an illustrious ‘trio’ of guests Alex Kerr, Nino Gvetadze and Vladimir Mendelssohn helped create a memorable performance that was alternatively edgy, romantic and earthy. From the darkest depths to transformation: a border crossed. Gvetadze’s dual gifts of Chopin’s Prelude op. 28 and Waltz op. 69 the following day crossed another border: from the beautiful to the sublime. 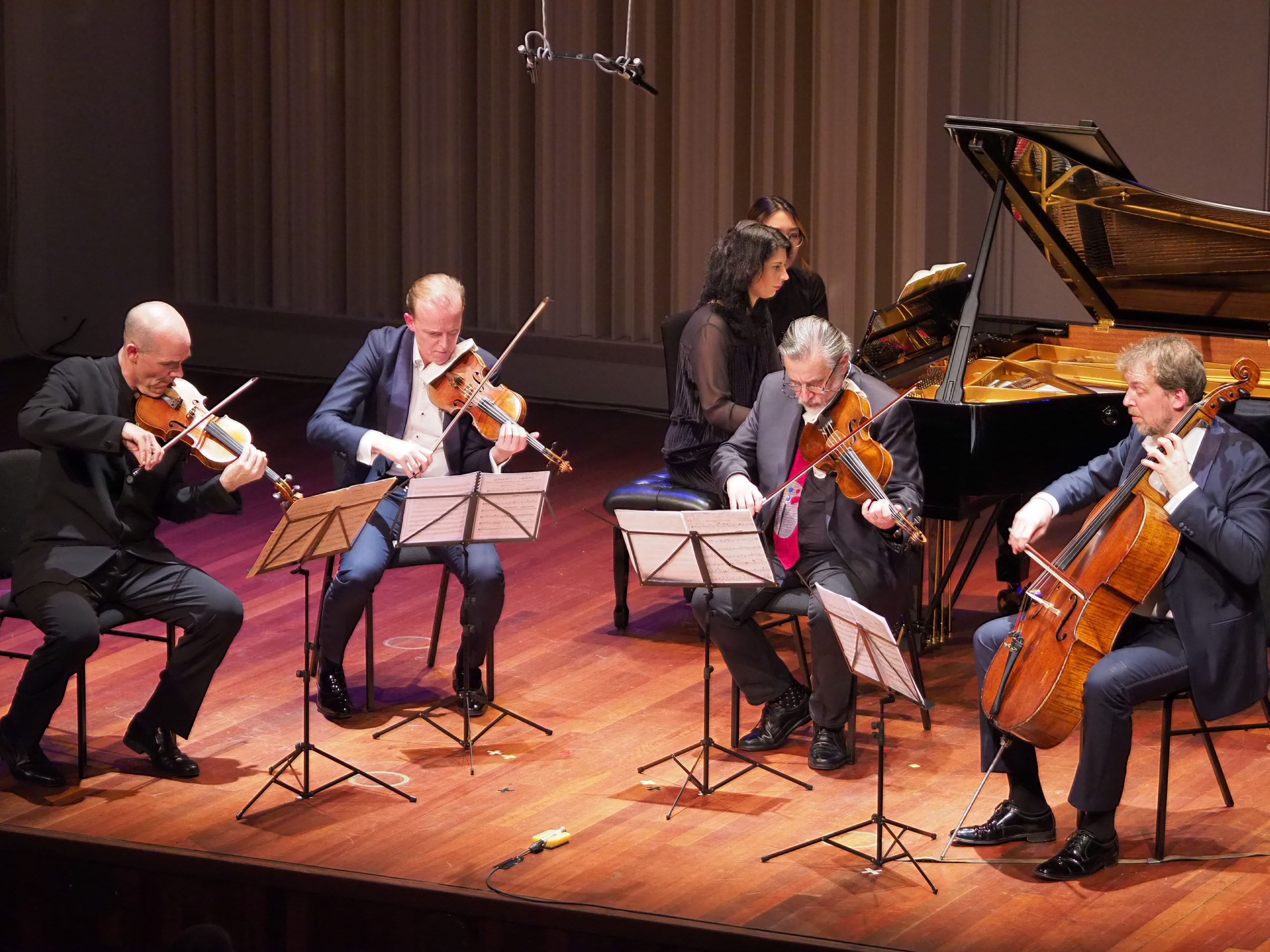 No festival these days is worth its weight in musical coinage without a premiere, so the Storioni’s presented two! Icelandic composer Daniël Bjarnason’s festival commission, White Flags inspired by eerie images of bleached American flags post Apollo 11 moon landing spoke through Arvo Part’s vernacular. Beautifully shaped by the Storioni’s, the piece moved slowly through series of harmonics and long hushed pianissimi. Finely wrought and tonally sensitive, the work was ‘much ado about nothing’ in terms of compositional originality. The Turkish-Dutch Orkun Agir’s contribution to the growing number of Storioni premieres, If I die… contrasted the quarter tones of a 7-string baglama to the texture of piano trio punctuated by a mournfully sung text.

Tijl Beckand, comedian and storyteller provided stylish commentary during the musical presentations at the festive Grand Parade. With passion and humor, he told the saga of his Belgian grandfather who was forced to return home by Dutch border guards in the late 19th century. The Storioni’s added lilt and life to his tale with a loving performance of grandpa’s piano trio. Moving on the Schubert’s transcendent borders of inner struggle and Haydn’s delight at discovering Britain late in life, the storytelling Storioni evening gave credence to lesser-known lights such as Joaquin Turina who abandoned Paris to return to his Andalusian roots, a deeply personal voyage eloquently translated into an outpouring of piano trios.

Syrian refugee Shaza Hayek sang a potpourri of folksongs in the foyer enchanting the audience en route between concert halls. The evening closed with a riveting rendition of Dohnanyi’s C-major Sextet for clarinet, horn, piano and string trio, a gem of pure romantic fantasy. Written in the turbulent 1930s, several years before the Dohnányi family fell headlong into the turbulence of the Second World War, the piece is lush and spaciously scored. The transition from the con sentimento third movement to the jagged giocoso finale of particular note.

Each day at this generous festival unfolds with innovative frontiers to break through and reach new heights. Border crossing will welcome the Iranian kamancheh-star Kayhan Kalhor midweek and offer the public the chance to hear music by Nodar Gabunia and Karim Al-Sand. Why head to Eindhoven, the Netherlands for a music festival in grey January? Certainly the weather would not be the draw. Think no further and take action. Make sure to spend some time at the next edition of the Storioni Chamber Music Festival to encounter the joy and discovery that make this festival so exceptional.

January 23, 2018 at 07:22 AM · Not lots of folks listen to music from that point although it can be exceedingly intriguing. Their music can be wholly different from the remainder of Europe and you are able to find also a really excellent artists. In reality, I'm the only person who brought Assamese music beyond the state. Music isn't only an enjoyable avocation, but it's a universal language that each and every citizen of this world will have the ability to relate to in 1 way or another. Meanwhile Malawian music was described as fast growing with regard to composition in addition to video and audio production. There's no terrible music when it comes to taste.

January 23, 2018 at 08:52 AM · Wouldn’t be great if the Storioni Trio could teach everyone in the music world to cross borders and stop encouraging negative competitive behavior?