To be: Ivry Gitlis going strong at 95

October 31, 2017, 2:50 PM · Step into the ever-invigorating world of Ivry Gitlis, one of the last poets of the bow whose legacy reaches back to Thibaut and Enescu and forward to Grappelli and the Rolling Stones. Ever vital at 95, Gitlis moves in fast orbit, scrutinizing the cosmos and all things musical with heart and soul, precision and insight. Mixing glib one-liners with philosophical deconstruction, he touched down in Amsterdam for two hectic days filled by a television appearance with the opulently gifted Daniel Rowland and master classes at the Conservatory of Amsterdam.

This magician of the musical craft is as apt to deliberate on democracy and individuality, as he is to polish a single musical phrase. Challenging a packed hall at the Conservatory with observations such as “our intelligence often interferes with…our intelligence: do not let your head get in the way of your heart, and vice-versa,” Gitlis motivated the crowd and four skillful performers to cross into uncharted territory. 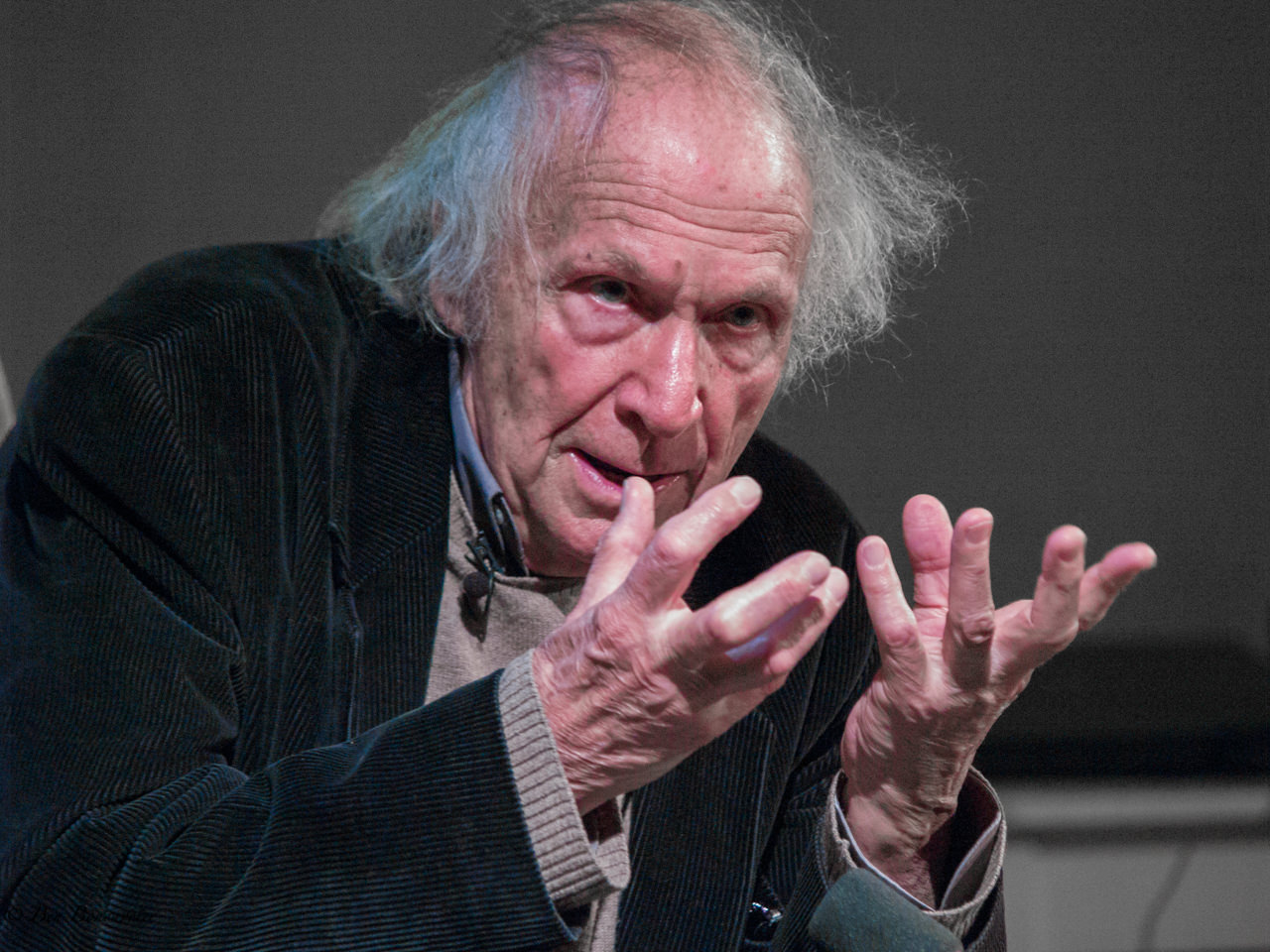 Tips to control nerves and enhance control proliferated as one-liners meshed with anecdotes. A small modicum of scrutiny reveals that Gitlis’ jokes encode deeper messages. “A man comes to the doctor and says, “I think I might have Alzheimer’s’; the doctor answers, ‘so, forget about it.’” Amid laughs, we are prepared to delve into an analysis on what to forget, and what to remember with the mantra that music has the power to break, build, change and unite, beating like a drum.

A sketch on the iconic, Russian pianist Sviatoslav Richter brought the message home: be prepared. “Richter always ran onstage, it was as if he could not control his desire to go out in front of the public and play, he literally almost jumped on the piano. I asked myself how he could have had the élan to do this night after night. One day I saw him backstage with a book of encores on his lap. He was calmly leafing through, mentally taking notes quietly, with concentration. He was preparing for that run onto the stage.” And, from Marion Anderson, Gitlis learned that it is the split second before one starts to perform that really counts.

While a throng of disappointed spectators milled around outside the hall (the Conservatory opted to hold the class in its small hall) the voyage inside intensified. “Violin playing is schizophrenic in its very essence. Consider, the right hand does not do what the left hand does, but (with a laugh) it certainly has to know. And now, think about this: we are living in a world that is in complete contradiction with what we play. The three Bs, Vitali, Debussy, Stravinsky ---what would they think if they stepped out into the world of today? Nonetheless, it is better to study at a conservatory, a music factory than work in a war factory like I did.”

In response to a solid rendition of the Sibelius Violin Concerto, Gitlis attempted to coax Hawijch Elders to play with more freedom of expression, greater elasticity of sound. To avoid ‘creeping’ portamento and realize legato, Gitlis spun images of the Aurora Borealis while stressing the urgency that lies beneath the act of performance. “When we play it is a question of life and death. If you allow yourself to feel a phrase in its totality, it will take you to where you want to go.” Humming the opening of the slow movement, Gitlis continued, “Music is never static. When you go to the seaside, walk to the edge of the water to experience the natural ebb and flow, the rhythm of life, that is where you will find inner rhythm, lithe tempi.” Gesturing largely, he offered a piece of technical advice. “Contrary to what so many of us do, more bow does not lead to more intensity in terms of sound, less bow equals greater intensity.”

Singing along with the opening phrase, he prodded further, “never be afraid of the music, I should feel from the first note that you are leading me.” Taking a trip down memory lane, “when I was 14, I took lessons with Enescu, which really means that I did not play for him, but with him. He sat behind the piano and led me, just as music should lead you. We exchanged ideas, he never ever dictated.”

No stranger to the stage, the 16 year-old mega talent, Noa Wildschut is a Warner Classics artist and one of the privileged members of Anne Sophie Mutter’s Virtuosi. Her Bruch Violin Concerto shone with commendable originality not to speak of splendid panache. Gitlis was not convinced by her choice for a drawn out opening phrase. “You know you are a great fiddler, but don’t show it too much. My mother told me: a beautiful girl cannot give you more than she has. You have a tendency to look for more, you have a large musical personality but the phrase is right next to you. It is often more difficult to play for one person than one thousand, make sure you know exactly what you want and then expand the territory to include the audience. I understand your wish to communicate but please realize: if you stop too much within a phrase, you lose its vibrant force.”

Sylvia Huang, who joined the Royal Concertgebouw Orchestra’s first violin section at 18 in 2014, wowed the overflowing hall with her extraordinary musical integrity and finely wrought phrasing. Answering to Gitlis’ beck and call, she moved forward from her prepared Ysaye sonata to two additional works that she had not prepared for the occasion: a bewitching rendition of Paganini’s Caprice #17 and an opulently phrased Adagio from Bach’s g minor sonata. In an attempt to get to the bottom of ‘who is Sylvia’, Gitlis took on the role of the empowering Zen master asking: ‘are you content with yourself? Why are you playing this often ungrateful instrument?’ Shyly, she answered that she wanted to have an idea of a piece and be able to present that idea while playing. Gitlis: “Be resolute, you need the idea before you are onstage. Some things will find you when you are onstage and of course you have to be free of all contingencies while on stage to discover the range of possibilities, but first, you must have a well-worked out plan, a shining idea.” With his uncanny powers of observation, Gitlis sensed her reserve and offered a helping hand. “All of us are lonely. Your loneliness is natural, we all wrestIe with it. As the saying goes, I am never so lonely when crowded, never so crowded when lonely.”

The message of music as a moving life force persisted as Gitlis asked the young performers if they improvise. Holding high the flag of imagination and ingenuity, he advocates maximum experimentation and breaks the mold of the pedagogue who tells a student what to do or what not to do. “To improvise gives us the gift of letting an idea flow.”

Lara Boschkor 18 years young and a prize-winner at several major competitions gave an athletic technically impressive rendition of Paganini’s 1st violin concerto but when asked to play Bach continued on with more Paganini, somewhat lost in translation. Her introversion prevented her from communicating with Gitlis who demands answers to probing questions. “Music goes beyond technique. A note is like a breath, the Indians teach. And, you have only a certain defined number of breaths to live. So, when you make music, in a certain way you give life.”

Decades spent on stage provided more grist for the Gitlis mill. With a twinkle in his eye, Gitlis shared: if you play a rehearsal and someone says that was wonderful, just repeat it tonight; I know I am in trouble. I get even more nervous because none of us can ever repeat ourselves.” Eschewing the idea of the myth of the artist, Gitlis maintains, “things are more banal than we think, we all have some talent. Everyone in this room has talent, the whole world has talent.” Expanding further, he embraces a humanistic viewpoint in which democracy is the key point to inspire individuality. “Live your life to the fullest, grasp this life with both hands.” Looking forward, Gitlis is experimenting with the idea of a program dedicated to the music of Beethoven, as the composer would have heard it. To quote his beloved Shakespeare, ‘to be or not to be.’ Let music win the day, take a listen to Gitlis, writer’s choice:

November 1, 2017 at 11:30 AM · As someone who never studied with renowned virtuoso and consummate showman Ivry Gitlis, I'd like to say that I think he's made a lasting contribution to violin artistry.

November 1, 2017 at 02:12 PM · Wonderful article Heather! Exactly what i wanted to know, after watching the tv broadcast Sunday, an not being able to go to the master class. I wanted to...we all know about Ivry, Daniel, and Noa wildschut is the daughter of a colleague, Arjan wildschut. I remember contributing for the Rafio Filharmonic's Viola group's gift when Noa was born! Thanks, Heather, Daniel, Ivry and noa!

November 1, 2017 at 03:14 PM · Fabulous article! Thank you for sharing so many quotes. I wish I could have seen this master class!

November 1, 2017 at 09:29 PM · Terrific article about one of my violin favourites. Such a poetic musician, a wonderful musical philosopher, and a damn funny man.

November 2, 2017 at 09:46 AM · Thank you for this great article. Gitlis has so much to teach. What remarkable advice for young Noa Wildschut (who is indeed supremely talented).

November 3, 2017 at 05:15 PM · Sometimes forgotten, sometimes eccentric, this beautiful musician this exceptional technician, has a beauty of his own. WOW. Since my listening of Barton 2nd and Paganini 2nd violin concertos....that was it....I have collected his recordings.

The most intriguing to me is the approach to each note....

November 3, 2017 at 11:20 PM · His approach to life is his approach to music: spontaneous, ferocious yet full of love. Thanks for a blog that captures a legend!

November 7, 2017 at 02:03 PM · Should be mandatory reading for so many contemporary violin teachers and for that matter other musical practitioners who love telling students 'what's wrong with their playing'. Thanks for a great post.