Diversity and Inclusion in Classical Music: The Enduring Vision of Sphinx

February 11, 2020, 4:02 PM · "The wonderful thing about the human mind and spirit, is that we are capable of evolving our vision and exceeding our own capacity to dream," said Sphinx Organization president Afa Sadykhly Dworkin before a standing-room-only crowd of nearly 1,000 at the opening plenary of the 23rd annual SphinxConnect conference in Detroit. Aptly-themed "Vision," this year’s symposium on diversity in the performing arts, along with the annual Sphinx Competition for African-American and Latinx string players, marked another passage in the improbable journey of this ground-breaking organization.

Sphinx began with a vision: to bring together black and Latinx musicians from across the country and even beyond, satisfying their need for validation in a world that too often excluded them. Aaron Dworkin, the founder of Sphinx and a young violinist of color in the late nineties, saw few others like him and knew only too well the loneliness of isolation. When he began the competition and formed an accompanying orchestra of black and Latinx musicians, I was lucky enough to be recruited as a violinist in one of the first Sphinx Symphony orchestras. Like my colleagues, I was excited to venture for the first time onto a unique musical landscape, one populated by my cultural kin. We black and Latinx professionals from various orchestras and ensembles, universities, conservatories and music programs across the United States assembled to accompany a group of stunningly gifted young performers as they competed for cash prizes, national recognition and a shot at a career in classical music.

No one could have envisioned what would take place over the next two decades. The Sphinx finals performance now reaches some 42 American states and 101 countries (through live and viewing audiences) and not only has the level of talent of the laureates increased exponentially, but the accompanying symposium on diversity, now nine years old, has broadened to register some 940 musicians, administrators, funders, board members and music advocates attending nearly 40 panels and sessions with a single vision: to transform lives through diversity and use the arts as a means for making lives –– and the world –– better.

And so the three days of convening and competing began. The SphinxConnect conference included a range of lively discussions on topics from teaching parents of young musicians to navigate the sometimes daunting path of classical music study, to whether classical music is valued in the black community, to the paucity of symphonic programming that adequately reflects a variety of cultures and the evolving racial demographics of America.

The finals concert, which closed the conference and competition, was historic in its own right, marking the first time founder Aaron Dworkin performed as guest artist. Having launched Sphinx when he was a student at the University of Michigan and serving as president, he preferred to remain in the background, yielding the spotlight to the young competitors. Stepping down from the helm (Afa Dworkin, current president, is his wife), allowed him to explore other pursuits. A published poet, author and spoken word artist, Dworkin was inspired by the music of 19th century black British composer Samuel Coleridge-Taylor and the words of George Washington to create a work for symphony orchestra and narrator. 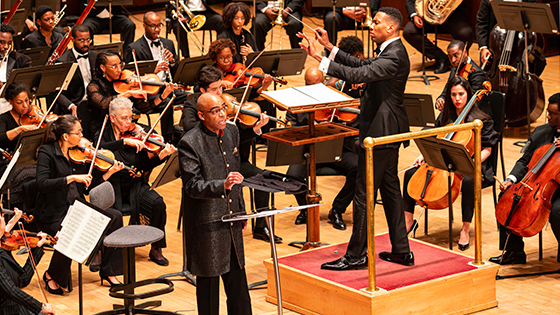 The son of a Sierra Leone Creole and Englishwoman, Coleridge-Taylor, like many black composers in history, is rarely heard today. Influenced by Brahms and Dvorák, he employed romantic themes, and infused his works with traditional African music. Using Coleridge-Taylor’s Variations on an African Air (based on the spiritual I’m Troubled in Mind), Dworkin exploited his own affinity for language, music and American cultural history to create The American Rhapsody, overlaying Coleridge-Taylor’s composition with text from George Washington’s speeches and writings, woven together with Dworkin’s own thoughtful prose.

"I wanted to take the words of a key historical figure and show how they were relevant to democracy today. I thought it would be interesting to juxtapose that with a musical work from a British composer," said Dworkin. "Then, once I began splicing pieces of (Washington’s) text with the music, the piece began to come alive and create its own journey."

The work comes across to great effect, and in The American Rhapsody Dworkin has created a tour de force. Dworkin’s innate musicality and sense of timing serve him well in exploiting the dramatic arcs, musical peaks and valleys and transitions of mood, from somber and reflective, to passionate and heroic. Quieter passages allow for introspective musings of a torn and complicated man ("The unfortunate condition of the persons whose labour in part I employed, has been the only unavoidable subject of regret," wrote Washington, who owned some 300 slaves) while martial rhythms reflect his confident leadership and military authority. Washington’s observations also bear an eery relevance to contemporary times ("However political parties may now and then answer popular ends, they are likely in the course of time and things, to become potent engines, by which cunning, ambitious, and unprincipled men will be enabled to subvert the power of the people and to usurp for themselves the reins of government…").

The music itself is by turns lush and evocative, plaintive and soaring, with sweeping melodic strings and majestic brass, as Coleridge-Taylor displays a full palette of orchestral colors and textures. But heard by itself, the piece seems to beg for narrative, hinting at a story that longs to be told. Dworkin’s dramatic prose elevates an already worthy piece, creating a stirring reconsideration of a founding father who, through words touched by music, appears more humble and self-effacing, more flesh, blood and bone than the figure trapped in American monuments and history books.

The Sphinx Symphony Orchestra, comprised of black and Latinx music professionals from Los Angeles, California to London, England, and led by Roderick Cox, winner of the Georg Solti Award and former assistant conductor of the Minnesota Orchestra, performed with a rare combination of passion, professional precision and youthful vigor in The American Rhapsody, and accompanied each competition finalist with sensitivity and attention to detail; one would never have guessed they had only two rehearsals.

Sphinx 2020 was a weekend of stimulating ideas, and inspiring music of extraordinary quality from beginning to end. One can only imagine what the next twenty-three years might bring.

February 12, 2020 at 06:03 PM · I do not believe in diversity in the arts. I believe in hiring the most talented person for the position regardless of gender, ethnic background or age. We should not hire musicians just because they are black or hispanic. I am hispanic.

February 12, 2020 at 06:47 PM · Victor, I couldn't help but notice what nice bootstraps you have, and was wondering where I can get some for myself.

February 12, 2020 at 07:50 PM · “I do not believe in diversity in the arts,” what a statement! You don’t have to believe in it - great talent exists across all races and genders and ages, whether you “believe in it” or not. I certainly welcome efforts to encourage that talent to bloom into accomplishment and great art.