Music and Humor: The Anatomy of a Musical 'Joke'

April 1, 2022, 9:05 AM · The proximity of Haydn's birthday to April Fool's Day has always struck me as a lovely coincidence -- and this year in particular, the beginning of April seems a good moment to take a much-needed break from the news, to stop worrying about end-of-semester exams, and to reflect a bit about the intersections of music and humor. 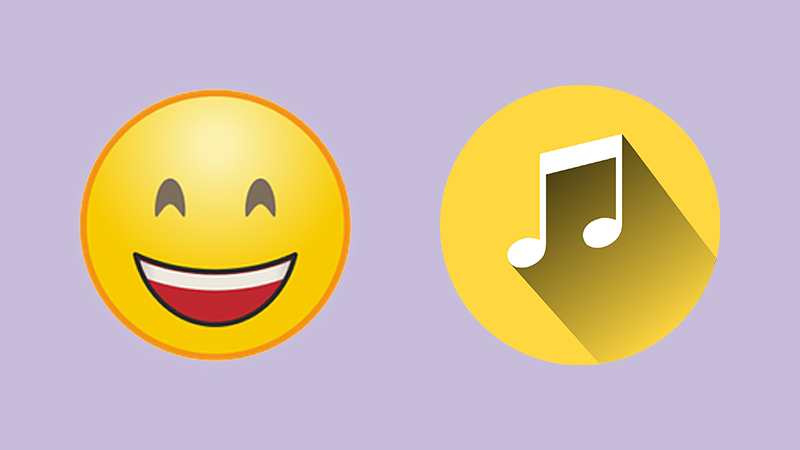 I've always been sensitive to comic elements of the music I play; yet when it comes to deciding what actually makes a piece of music funny in the first place, my criteria are always shifting. For the past few months, I've been thinking about this in the light of techniques used by the late, great comic Norm Macdonald. The news of Norm's death in Fall 2021 inspired me and many other fans to revisit videos of our favorite jokes and routines. This time around, in addition to being struck by all the usual elements of his virtuosity (the daring selection of subject-matter, the deadpan delivery, the jokes so drawn out that he barely manages to maintain a thread of coherence), I was impressed by the insight with which he could discuss the technical facets of joke-telling: for instance, in this video, where he describes the perfect joke as being one in which the setup and punchline are identical or almost identical:

In a blog post, philosopher Eric Schliesser makes the lateral connection between this theory of the "perfect joke" and academic philosophy, a field in which an argument of the form "A=A" can itself be a source of humor. This particular way of conceiving the structure of a joke -- through the identity of "A=A" -- is, in its abstract formalism, philosophical through-and-through. Yet various connections with music also suggest themselves. Music deals regularly in humor and wit. It is also necessarily formalistic, since musical utterances accumulate meaning not through their semantic content, but as a result of the forms in which they are laid out. And, owing to its formalistic qualities, music is an art of tightly controlled repetition.

The most familiar way in which repetition features in music is through the formal trope of the recapitulation: that simultaneous return of the global tonic and the first theme, the moment that gives purpose to the trajectory of Sonata Form. Yet the kind of repetition I have in mind as the basis for A=A-style humor occurs on a much smaller scale, through the repeating motifs that give any piece of music, in any genre, its coherence. (These repetitions can be exact, or they can be slightly altered; for instance, in Mozart's famous "easy" Piano Sonata K545, the opening rhythm in bars 1-2 repeats, with different pitches and chords, in bars 3-4, giving the impression of a consistent, paired statement-and-response.) Much of this small-scale repetition is made possible by the modularity of music. Phrases are made up of small, separable chunks, and these can be repeated, shifted around, recombined, and mutated as a piece unfolds.

Much musical humor arises through the deft repetition of such chunks. One particularly famous instance of wit in music is Haydn's "Joke" Quartet, op. 33 no. 2, whose last movement presents a series of small modules in the first phrase:

Module A, in this case, occupies the first two bars. Bars 3-4 present an altered version of A, with a slightly varied melody and a harmony 'on' the dominant; and bars 5ff present yet another altered version. The eponymous "joke" is that A contains a melody suggestive of the beginning of a movement but a bassline suggestive of cadential closure; thus, in the first two bars, Haydn uses A to begin the movement, but in the final moments he uses A for the ending as well: 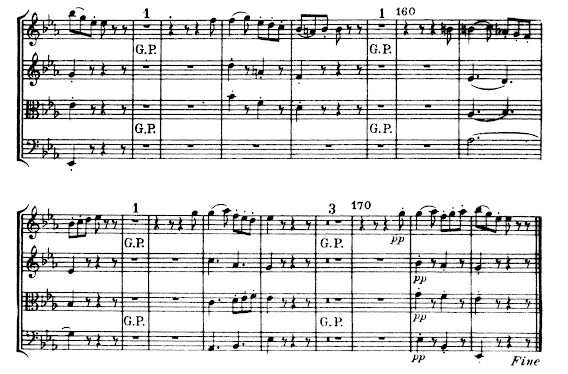 The humorous effect is helped along by the grand pauses, which prevent unsuspecting listeners from knowing quite where the piece stops. One possible ending comes in bar 166, where the first theme also ended. But Haydn extends the movement, leaving a gap of another three bars, and then presenting A -- which, though it sounds like the start of something new, also provides a satisfying harmonic close to the work. In this case, the joke is, quite literally, that A=A: that the setup and punchline are contained in equal measure in the kernel with which the movement begins.

Another, similar example of the same kind of humor occurs in the last movement of Mozart's Symphony no. 39, when the gesture presented at the beginning as an "opening" module is reused in the final bar. Here, as in Haydn, the same calculation goes on in hindsight: we realize that the gesture traces a descent from scale-degree 5 to 1, and that it can therefore double as a perfectly good closing module, even though in its first appearance this motion is hidden because of the rhythmic underlay.

Jokes of the form A=A, musical or not, seem worlds away from other modes of humor explored by Norm. Yet extensions and variations of this strategy can be located throughout his corpus, as well as in some musical works. A staple of his humor, for instance, is the long, rambling joke that ends with a silly (often inane) punchline. The celebrated "Moth" joke is exemplary:

There are many respects in which the narrative strategy at work in this joke can be related to musical compositions. For instance, much of Norm's delivery involves "playing dumb": he pretends to be inarticulate or otherwise unable to follow the joke's narrative thread, the better to make a heroic rescue when, at the end, he delivers the unexpected punchline. This technique of feigning incompetence has a precursor in 18th-century music, where the simulation of improvisation (as in written-out cadenzas, fantasias, and capriccios) would be more theatrically convincing if the player or composer used haphazard structures or modulations. These would seem to be incompatible with careful, compositional planning, and would help give listeners the impression that improvisation was taking place. Haydn's Capriccio in C major -- both an exemplar of musical humor and a masterpiece of simulated improvisation -- shows both techniques in action. The work alternates tightly-structured motivic elaborations with passages of blatantly un-melodic writing, haphazard modulations, and parenthetical digressions that are neither properly begun nor properly ended. The performer, as a result, seems to be following whims of the moment rather than a prefabricated compositional plan:

In both Haydn's Capriccio and Norm's Moth joke, the formal plan of A=A is still present, hidden within the protracted structure. Both narratives elevate bloatedness to the level of a humorous trope. In the moth joke, Norm constructs an extended parenthetical about the moth's personal difficulties; and in Haydn's Capriccio, the harmonic plan follows a number of extended digressions into distant tonal areas. Both end with an obvious, even banal, return to the subject-matter with which they began -- and it is in this sense that their overarching paths still follow the plan of A=A: or, more correctly, of A.......=A. As soon as Norm says "a moth goes into X", a punchline involving "attracted to the light" seems inevitable. Likewise, built into Haydn's musical vernacular is the requirement that a composition end with an emphatic assertion of the tonic. In this particular work, the melody begins G-C and thus prefigures the V-I motion of the last two chords. Both works complicate the path from the first phrase to the last; yet both nonetheless derive a large part of their comic value from the way they flirt with incoherence while nonetheless eventually regaining their narrative thread and ending, quite literally, just where they began.

Of course, A=A is not the entire story, in either Haydn's or Norm's comedy. Even if utterances that take this form are occasionally funny, it seems clear that they are not necessarily funny. One question, for instance, is how much the delivery contributes to all of this. Is it in the text, or in the performance, that the essence of the joke is to be found?

In both cases, delivery is certainly part of the package. It seems obvious in Norm's case that we're laughing not only at what is said, but at the way it is said, including his body-language and stage deportment both before and after the joke. (Before: setting it up as being someone else's idea [playing dumb, again]; and after: glaring at Conan, trying to gauge the reaction -- or, in other cases, quietly chuckling at the jokes himself.)

Performance is equally relevant to Haydn's wit. In both the Quartet and the Capriccio, Haydn weaves performative concerns into the structure of the composition. In the quartet, the extended pauses are integral parts of the joke -- both because they help to "disentangle" the modules, allowing us to hear more clearly the I-V-I motion of A when it is used as the final utterance, and because they help to build uncertainty as to when the movement actually ends. In the Capriccio, Haydn instructs the pianist to sustain some notes (particularly those immediately preceding audacious modulations) until the sound has naturally faded away before moving on to the next segment. Both of these techniques -- the grand pauses and the protracted sustains -- are meant to slow down the performer: perhaps to simulate the act of thinking, of stalling for time, of searching for the next word. Both Haydn and Norm prefer to stumble, fail, and splutter as they seem to lose themselves in a narrative loop. Yet both ultimately arrive back again at A.

Mozart's humor, in the 39th Symphony and the various other works in which he mixes up opening and closing modules or plays dumb, is geared less towards performance and more towards abstract elements of the compositional language. Why? We can't be certain, but one possibility is that he is more interested in subversion than straightforward joke-telling. Haydn's jokes make uproarious humor a feature: they want to be noticed by listeners. Although Mozart tells his share of blatant jokes (most famously in A Musical Joke, K.522), his humor is generally subtler, often leaving us wondering whether what we just heard was a joke at all. When he wants to maximize this ambiguity, the best way to do it is not to suggest real-time, spluttering, performative decision-making, but allow the players to keep a straight face while the musical grammar seems to unravel.

(Also posted to my personal blog.)

April 6, 2022 at 05:01 PM · Yes, very interesting. It seems to me that looking at music with attention to a humor interpretation, one can find many pieces that have passages here and there that certainly have a subtle, implied humorous element. Some pieces, obviously, are overtly written with (at least in part) a humorous intent. Such pieces as Till Eulenspiegel and The Sorcerer's Apprentice clearly have some truly intentional humorous passages. Who knows what other subtle emotional possibilities for appreciation can be found in great works of musical art?