My Year of Listening and Reading

December 30, 2021, 7:55 PM · Each year, as the end of December approaches, I receive an array of "year in review" newsletters. 2021 is no exception. Whenever I open my inbox these days I find another such email, with details of performances, recordings, and other musical projects undertaken over the previous 12 months by friends and colleagues. Sometimes, reading these newsletters, I find myself wondering: how do they manage to do so much? But more often I simply enjoy the ritual of reflecting on past successes and shoring up hopes for the future.

However, as 2021 rolls into 2022, and with a fresh wave of Covid-related cancellations on the horizon, I feel aware of the sheer circularity of it all. Never in my experience has the "arrow-of-time" metaphor felt less apt: 2021 doesn't really appear to be over, but (like 2020) seems ready to stretch endlessly into the future. Perhaps as a result, I feel disinclined to take an accounting of accomplishments of the past year, much less to lay out goals for the coming months. But this does seem a good moment to reflect on some of the music and books that I consumed over the past year, and which made 2021 more enjoyable than it otherwise would have been. Although many (though not all) of these selections move beyond violin repertoire, I'm posting them here in the hope that they'll bring joy and solace to some others as well.

Because I began 2020 with a busy concert schedule (albeit one cut off rather abruptly after the first quarter of the year), I count 2021 as the first year I spent mostly off the stage. Of course, there were a few straggling concerts--but, for the most part, in 2021 my musical identity was not that of a performer but of...a listener. This turned out to be the source of many unexpected delights. In the past, I was spending so much time making music that I barely found the mental and aural space to enjoy hearing it; yet in 2021, I rediscovered the pleasure of being in the audience, and particularly of listening in complete cycles rather than just spot-checking favorite movements or individual works.

During the first portion of the year, I focused almost exclusively on Beethoven, listening to the bulk of his sonata, chamber, and concerto output. Being a card-carrying period performer, I am always on the lookout for compelling recordings that use fortepianos and gut strings, since, particularly with Beethoven, the old instruments make it easier to capture the gripping, volatile excitement of the music. Beethoven pushed players and instruments alike to their limits (and sometimes beyond those limits!), and this intensity is often dulled by the power of the modern equipment used by most performers today. It is only because the fortepiano and period violin are comparatively delicate that they can be played, as Beethoven intended, at the very edge of possibility. 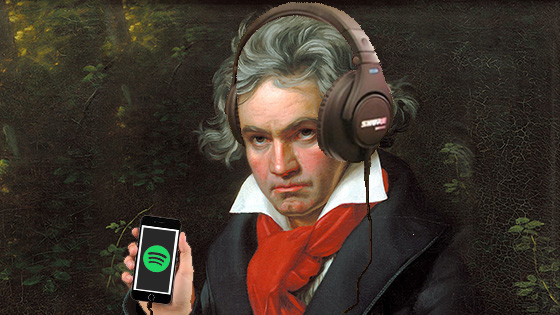 For some of Beethoven's repertoire, 2021 gave me the opportunity to revisit favorite cycles from an earlier phase of period performance. I listened twice-through to the marvelous piano sonata cycle by Malcolm Bilson and colleagues. Age has not dulled these performances; the cycle as a whole still strikes me as one of the greatest Beethoven recordings I've ever heard. (I also supplemented this cycle with some other, more recent recordings, including Andreas Staier's exploration of opp.31, 34, and 35.) I also re-listened to Bilson's recording of the Beethoven cello sonatas (with Anner Bylsma), and, here as well, the music-making is extraordinary. Finally, I re-listened a few times to the Beethoven piano concerto cycle, performed by Robert Levin. Although these works have been re-recorded recently by both Ronald Brautigam and Kristian Bezuidenhout, I am still partial to Levin's recording. Whereas the more recent readings find welcome lyricism and clarity in Beethoven's writing, they simply lack Levin's audacity, brilliance, and wit. Although Levin is known primarily as a Mozart performer, I think he is at his best in this slightly later repertoire. The improvised cadenza to the first movement of the Fourth Concerto is a particular highlight--though the other cadenzas, too, as well as the playing overall, are consistently astonishing. (In addition, although I remain committed to my preference for period performances, I loved a spectacular recent modern-instrument recording by Eugene Albulescu and the Orchestra of Friends.)

I also discovered some more recent Beethoven recordings. The most revelatory was Trio Goya's performance of the Piano Trios op.1. These early works are difficult to bring off well, since they demand that the performers balance both classical polish and lyrical intensity. Previously, I had found the Castle Trio to provide a close approximation; but Trio Goya's readings are deeper in every respect. Speaking of the piano trios, I also recently discovered a wonderful complete cycle by (modern-instrument) Van Baerle Trio. Although I still prefer Trio Goya for Op.1, these readings of the other works in the cycle are wonderfully stylish and sensitive. Alongside these recordings of the piano trios, I listened to several complete violin sonata cycles, including those by Midori Seiler with Jos van Immerseel, Susanna Ogata with Ian Watson, Ralph Holmes with Richard Burnett, and Benjamin Hudson with Mary Verney. Here, it was difficult to find a clear favorite (though Siler/van Immerseel would be a likely choice), since each recording has its own strengths. Finally, I surveyed a few new recordings of the Violin Concerto, of which my favorite modern-instrument reading was by Daniel Lozakovich--though my heart still belongs to both the Monica Huggett recording and the early (and live?) performance by Heifetz and Toscanini.

Following my Beethoven phase, I embarked on a survey of Mozart's violin concertos in a number of new recordings. Here, as with the Beethoven sonatas, it was difficult to choose a favorite, though among recent recordings the cycle by Christoph Koncz was perhaps the most elegant, and the cycle by Nils-Erik Sparf the most creative, unusual, and compelling. (The classic recording by Monica Huggett still remains my all-around benchmark.)

Finally, I ended the year with a pretty obsessive dive into Schubert's Die schöne Müllerin. My previous go-to recording was by Ian Bostridge with Mitsuko Uchida: although the timbre of Bostridge's voice isn't always pleasing, and his intonation is occasionally imperfect, I adore his delivery of the text; and Uchida's piano playing is sublime. However, this year I listened to some others: Mark Padmore with Paul Lewis (gorgeous singing, subdued piano playing); Christoph Prégardien with Andreas Staier (abrasive singing, gorgeous piano playing); and Jan Kobow with Kristian Bezuidenhout (difficult to get into at first, and with a handful of imperfect songs...but ultimately mesmerizing). If only it were possible to pair Padmore with Bezuidenhout for this cycle, as Harmonia Mundi has already done for An die ferne Geliebte, Winterreise, and Dichterliebe.

Book recommendations may be of less direct interest to readers here. I didn't do much violin-specific reading in the past year, though there are some broadly music-related books that I very much enjoyed. Two are new (or relatively new) trade books: Dan Moller's The Way of Bach, and Robin Wallace's Hearing Beethoven. Both are beautiful and beautifully-written; the authors reflect on music itself, as well as a wide range of related topics. On the academic side, I read or re-read a number of older books, the most enjoyable of which were Dean Sutcliffe's The Keyboard Sonatas of Domenico Scarlatti, Annette Richards's The Free Fantasia and the Musical Picturesque, David Yearsley's Bach's Feet, and Nina Penner's Storytelling in Opera and Musical Theater. I also kept up a pretty brisk pace through various novels (the best of which were by Dorothy Baker, Shirley Hazzard, Dermot Healy, Martin Amis, and others) and poetry. I wrote about some of those other books in this e-interview back in March. Many of the novels I read this year were brought to my attention by the wonderful literary podcast Backlisted, which has been a source of entertainment and stimulation over the past year and a half.

Although this post isn't about the work I've done this past year, I will mention one recent article of mine, published a few months ago in the journal Early Music, which may be of interest to this community: an exploration of the relationship between polyphonic violin-playing and contrapuntal technique in 17th- and 18th-century Germany. In it, I examine some of the evidence surrounding historical violin techniques, and I discuss various contrapuntal structures found in works by Walther, Biber, Westhoff, and Pisendel, as well as some of their successors (particularly Bach and Beethoven). To get access, you'll need an academic affiliation or a library subscription; however, feel free to email me if you'd like to read it but you have no institutional account.

Happy new year to everyone!

January 1, 2022 at 02:37 PM · Thank you for this, Dorian. I shall reread it thoughtfully...at the moment the excesses of heavy meals, hospitality and a late night prevent concentration! Meanwhile, happy new year!