This post can also be read here along with other posts on travel, reviews and classical music.

I love soundtracks. I love Star Trek. So naturally, when I found out that the Melbourne Symphony Orchestra were going to perform Michael Giacchino's score live, I immediately felt like I would have to go to this concert. Fortunately, it just so happens one day I noticed on Facebook that the MSO were running a competition whereby the first twenty people to photograph one of their street art items (something Melbourne is famous for) and post it on social media would win a double pass to the corresponding concert. I instantly knew which art piece I wanted to post and where it was. I conveniently had an engagement in the city that day, so I left a little earlier to make this happen. Later that day, after navigating a construction site down one of Melbourne's most famous street art laneways (Hosier Lane), this appeared on my social media. 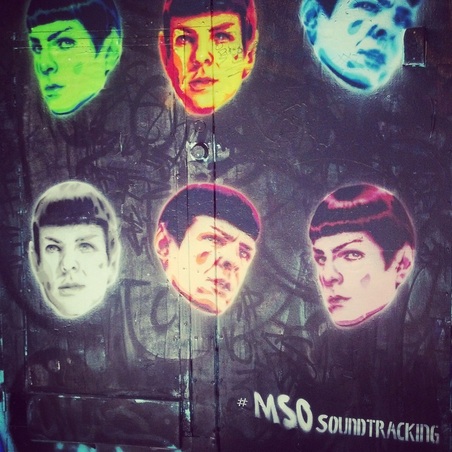 There were other options available around Melbourne to photograph and hashtag, but this was the only one that I really wanted because I knew my dad would also like to see this particular performance. About a week later, I received a comment on the photo from the MSO telling me to email my details to them as I had successfully won tickets (which I received about a month later). Exciting!

Fast forward to the day of the performance. We arrived at the venue about 20 minutes before the performance; just before the doors opened to the public. Plenery Hall is a multipurpose convention centre space which in it's primary form, has the capacity to seat around 5,500 people. The hall has the ability however to be cordoned into three thirds, providing three function spaces, which had been done so in this instance leaving the MSO the centre third (reducing its capacity to around 2,400 seats). This makes sense as the middle third is the only third you would want to be sitting in to get a good view of the movie playing on the screen. It was encouragingly, more or less a full house (apparently for the previous night's performance too) and perhaps more so was the very diverse demographic of people attending. As this is my primary industry of work and study, seeing diverse audiences coming to see live orchestras makes me very excited and hopeful.

Once most people were seated, the lights dimmed and you could hear quiet anticipatory exclamations all over the place. The orchestra tuned before the conductor, Nicholas Buc walked onto stage sporting the famous Star Trek "Comm Badge" on his lapel to appreciative applause. I must digress here and say that I was slightly disappointed that there were no programs distributed providing information about the music/composer/orchestra etc. and I had to do a bit of poking around on the MSO website to find out who the conductor was for this review. (But a relatively unimportant complaint)

At this point, it's quite hard to do a linear review of the concert given that it's in effect, one continuous piece, so all my observations are not necessarily in chronological order. The first thing I found myself very interested in, was the screen sitting in front of the conductor essentially beating and counting out the measures for him. I have never seen a soundtrack to a movie live before, and honestly had never realised the system for synchronizing music to film had become so sophisticated. That in itself, to me was very much a marvel and I can't imagine the amount of work that must go into scoring a piece of music with such precision in timing.

The next thing that I noticed was the fact that the movie was subtitled, which I initially thought to be strange until it became very readily apparent at one of the early climaxes that a live orchestra does not benefit from the same level of audio mastering that a prerecorded one usually does. There were many points where the dialogue was obscured by the live music, but I didn't mind this to be totally frank. If anything, I actually found the movie to be more personally affecting on the whole, hearing the soundtrack live (and slightly louder). This one particular moment comes to mind, whereby Spock is having a heartfelt conversation with his mother just as Giacchino busts out the erhu which comes and tugs at your heartstrings like only an erhu can. I had previously not actually been aware of an erhu in this score due to it probably being balanced more quietly in the film.

Hence, one of the advantages of the live music was how much more aware I became of all the exciting textures and instrumentation used. As a musician this definitely enhanced the experience for me. From all the different types of bowing techniques, to the exciting onstinati and interesting harmonies, I would definitely have come to see this for the soundtrack even in the absence of the movie as it is incredibly evocative writing. The MSO did a marvelous job of it too, well and truly bringing the soundtrack to life. The playing was underpinned with very good intonation and rhythmic accuracy and I particularly found their use of dynamics to be very effective. Most importantly, they brought the character of what was on screen to life, in what I felt was the best way possible, leading to the movie being more intense and exciting than the previous times I'd seen it.

The intermission came as a slight surprise to most including me, but the initial state of being caught off guard was very quickly replaced by understanding and a hearty round of applause. Of course they needed a break, I know how hard it is to sit on stage and play a symphony that lasts 40 minutes, let alone a continuous movie score. Though, from what I could see, many of the first violinists seemed to be enjoying the movie in their bars of rest (which I thought was nice to witness).

The second half of the movie continued in very much the same fashion as the first, and I honestly enjoyed every minute of it. The soundtrack was played so magnificently you honestly couldn't tell it was live half the time, and I found myself constantly switching between watching the orchestra and the movie. One small gripe I had however was the fact that the choral component of the score wasn't performed live (from what I could see) and instead was synced with the orchestra on the movie reel, but I suppose this was probably a practical thing too.

As the movie drew to a close, the audience sat and listened attentively to the orchestra as they played through the full credits before rewarding them with strong applause at the very end. It was clear that everyone had very much enjoyed themselves from all the cheering and we were thus rewarded with an encore, the original Star Trek: Next Gen theme, which is arguably the most iconic of the Star Trek themes. This was also very well received.

In general, I love anything that is innovative or different when it comes to symphonic music and the orchestras that play it. I think it's always fantastic when orchestras go out of their way to make themselves more accessible to the public by whatever means. Here we had a whole lot of people who I could almost be certain have never been to see an orchestra play live before, yet the setting made them open to it, and hopefully enjoyable for them. Beyond being a great performance, it was wonderful to see so many different people to the usual audience at this concert.

I think I often take symphonic music for granted, given how often I am exposed to it, and how often I play it. Today however, I had the pleasure of being reminded how evocative and powerful good symphonic writing and playing is. How intensely it can affect our emotions, and how much it actually appeals to everyone when it's given a chance to. 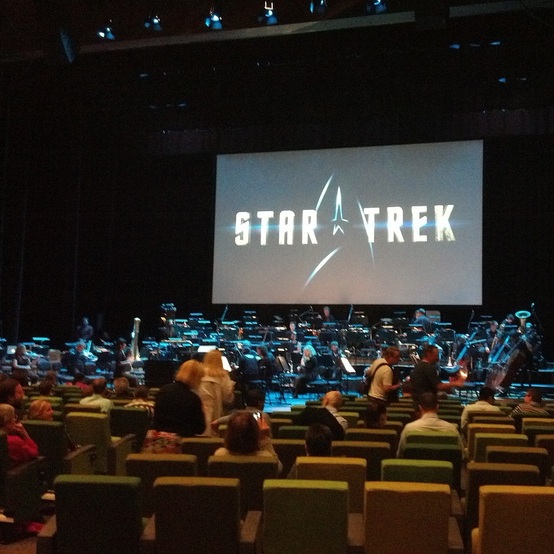 From 101.160.64.205
Posted on February 2, 2015 at 12:40 PM
I was at this performance too, and I absolutely loved it! The subtitles surprised me too at first, but it definitely became clear pretty quickly that they were needed. I didn't mind the times that the music made it hard to hear the dialogue because the music was just so beautifully played.

The conductor's screen was fascinating - it must have taken a LOT of work to get the flashes of light to pulse at the right time for the entire length of the movie.

I thoroughly enjoyed this concert. It was a very fun performance to attend. I hope they do Star Trek Into Darkness sometime in the future!