Australia is lucky to have an organisation like Musica Viva, one of the largest presenters of chamber music in the world. As a result of their existence, we have been lucky to have many amazing musicians and ensembles tour Australia over the years as a result (Ray Chen, Golder, Julliard, Takacs Quartets and Yehudi Menuhin to name but a few). Continuing this tradition of excellence and to celebrate their 70th birthday, Musica Viva Australia brought Maxim Vengerov to Australia in an exciting and diverse recital program alongside pianist Roustem Saitkoulov (who is a regular partner of Vengerov).

Whilst the Melbourne Recital Centre's Elizabeth Murdoch Hall often provides an ideal setting for this sort of program, Musica Viva opted to take celebrations to the next level, instead booking Vengerov into Hamer Hall (comparable in size to Carnegie Hall). Whilst not sold out, my best guess would put the hall at more than 2/3rds full, which is still an impressive 1700-900 people, highlighting Vengerov's impressive draw power. Suitably so, the air was rife with the anticipation of witnessing one of the world's most reputed violinists, as well as partaking in the birthday celebrations. 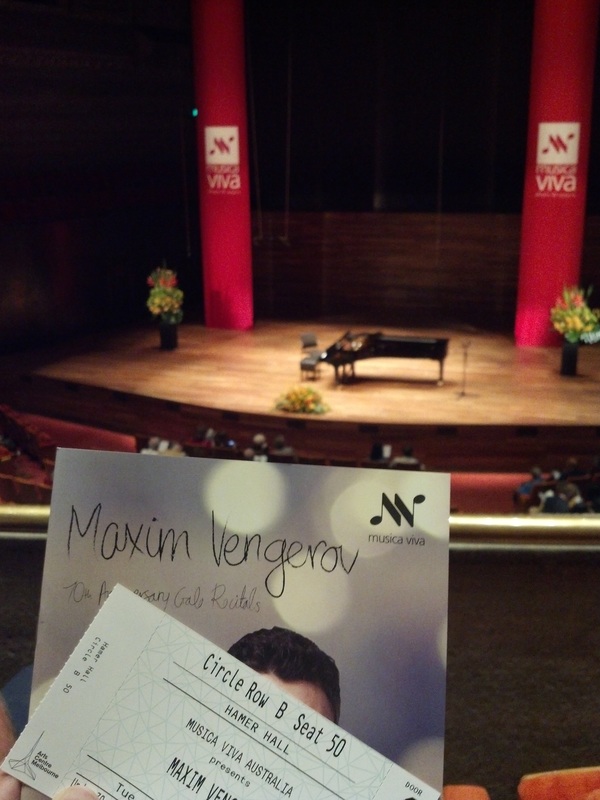 Walking out to enthusiastic applause, Vengerov began with Bach's immutable Chaconne, from Partita No.2. From that famous opening chord, I could already tell that this would be a special concert. Vengerov projected an incredibly rich sound throughout, with a masterful level of clarity. The various musical lines were brought out and highlighted with diverse colour and texture with the utmost ease. However, beyond qualities I can adequately describe with words, his playing made you sit up and listen. The silence and concentration among the audience was palpable, with little fidgeting and movement audible. As such the performance felt engaging and intimate, despite Hamer Hall's cavernous proportions.

Next up was Beethoven's 7th Violin Sonata in C Minor. Again, many characters and emotions were aired, and the long running partnership of Saitkoulov and Vengerov was evident, with effortless ensemble between them. Of all the works on this program, this one took the longest to get my attention and impressed me the least (which really means nothing at a Vengerov concert). The first movement suffered a few balance issues with the piano overpowering some of the violin's quieter moments and I unexplainably found myself less convinced than with the Bach. However, a particularly exciting and dramatic 4th movement won me over again, drawing the first half of the program to a close.

Musica Viva and Vengerov took great liberty with this tour to program an incredibly diverse set of repertoire. Where the first half offered up familiar and regularly performed works, the second half much less so. Ravel's jazz inspired 2nd Violin Sonata opened the second half, with the audience audibly delighting in the very affective performance of the piece (particularly the 2nd movement). Vengerov and Saitkoulov again offered many different textures and colours, with similarly impressive ensemble, particularly in the perpetual motion of the 3rd movement.

Following this was a true display of Vengerov's technical and musical mastery through the following: Ysaye Solo Sonata No.6, Ernst Etude No.6 (Last rose of Summer) for solo violin and Paganini Cantabile Op.17 in D Major and I Palpiti Op.13 (Arr. Kreisler). Much like the Bach, both the Ernst and Ysaye again drew me in to the lone performer on stage, in what was hands down one the most impressive technical displays I have ever witnessed live. For all the difficulties thrown up by Ysaye and Ernst, the music was effortlessly realised in a joyous and uncontrived manner. On top of being musically satiating, I couldn't help but shake my head and the effortless technical fireworks I was witnessing, including a particularly fast run of thirds in the Ysaye. I greatly enjoyed was how entertaining the whole experience was while still being musically substantive. The audience revelled in the unaccompanied works, with many audible 'wow's and gasps, as well as collective laughter after some particularly impressive left hand pizzicato work. The Paganini drew the concert to a close with all the fireworks and entertainment one would expect of the composer, again executed with aplomb by the pair.

As the thunderous applause became a standing ovation and streamers of red and white began flying (courtesy of Musica Viva), the pair returned for the first of three encores, Hungarian Dance No.2 by Brahms, Meditation from Thais by Massenet and Hungarian Dance No.5 by Brahms. The routine of standing ovation and streamers was joyously repeated in between each encore. Notably, before the third encore, Vengerov returned to the stage with a microphone, beautifully paying tribute to Musica Viva as well as the educational, musical and other opportunities he himself has been afforded throughout his life. He came across as nothing but genuine and grateful for his experiences thus far and spoke enthusiastically about music's ability to appeal to humanity and heal the soul. So enthusiastic was the audience by this point, applauding bled into Hungarian Dance No.5, at the conclusion of which thousands of red and white balloons fell from the ceiling to the delight of the audience and performers. Vengerov and Saitkoulov launched into a rendition of Happy Birthday drawing the evening to its close replete with balloons, streamers and enthusiastic singing from the audience. 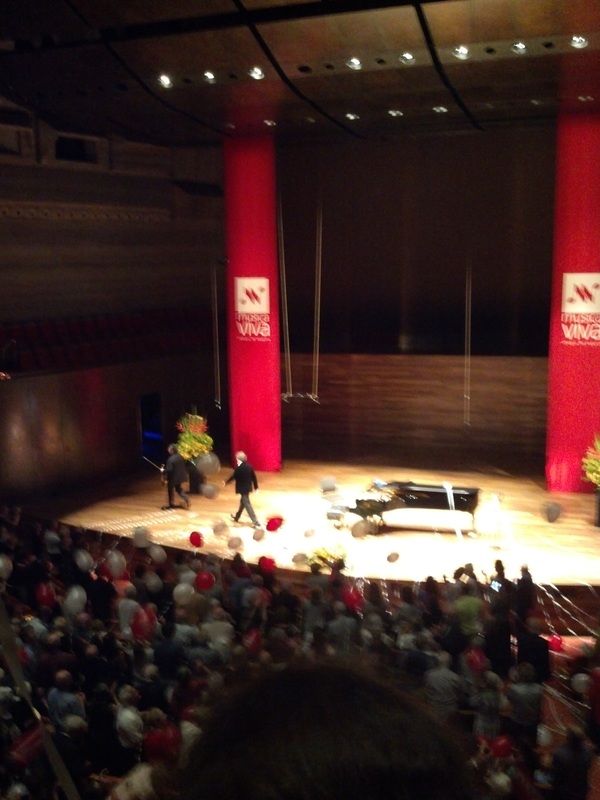 The English language fails me in this instance, as I struggle to adequately articulate how joyous I felt leaving this concert. Firstly, I was lucky enough to witness some of the most astounding and inspired playing I ever have so far in my life. I will never forget the power of Vengerov's unaccompanied performances, which demanded full attention to the significance of the music. Beyond this however, the technical fireworks, the beautiful music, the occasion, the enthusiastic, non-pretentious and verbal audience, the streamers and the balloons all meant that I left on a real natural high. The more I think about it, the more I realise just how much fun I had. Whilst I would often describe experiences of live classical music as enjoyable, amazing, provoking, beautiful etc. I do wish fun was a word I could use more often, as I can on this occasion.

This can also be read here at my own personal blog along with a variety of other topics and conversations.