This can also be read at my personal blog along with other posts on things such as travel here.

So with the New Year comes the end of my break from violin and a fresh set of repertoire to learn before the new semester commences. Among the competitions I'm angling for and the normal swathe of technical and repertoire requirements for the university year lies an audition for the position of concertmaster of the university orchestra. This was a position I was successful in attaining last year, though for the sake of my sanity as a second year student, they put me in the associate chair to be mentored by professionals.

In order to re-win the position this year however, the infamous violin solo from Strauss' Ein Heldenleben stands in my way. It's not the only excerpt on the list but it certainly the most daunting and unfamiliar to me! So in this short series I intend to document my preparation from start all the way to the audition in about one and a half months time.

Today marks the end of my first full violin practice week in a while now and I've more or less gotten straight back into it (around 4-5 hours a day). This has involved basic technical work, some Paganini and Dont caprices, some solo Bach, the Saint-Saens third violin concerto (of which I'll play the first movement for this audition) and these excerpts. I made a point to start with the easier excerpts first (some Beethoven, Brahms and Bach) to build a bit of confidence and to make sure they were achievable in the time frame with less attention (which I'm now satisfied they are). However, since then, most of my time spent on preparing these excerpts have been directed to the Ein Heldenleben solo.

Being completely unfamiliar with the piece and solo, my first priority was to listen to the solo a number of times. Thankfully, there are many clips on YouTube which highlight this solo (though I do intend to listen to the whole work at some stage). When I start a new piece, I usually try to sight-read at least a part of it through as best I can. I find it helps me get a feel for what kind of technical and musical challenges I am likely to face when tackling something new. Needless to say, I didn't get very far very fast

Before deconstructing the music and learning it properly I decided to translate any unfamiliar terms on the page (my German is fairly limited) and write them in so I'd be aware of them when I was learning the part. I also did a bit of reading up on the solo, and there is a fantastic blog post by Noah Bendix-Balgley (current Concertmaster of the Pittsburgh Symphony Orchestra) in which he talks about how he approached the solo for a recent concert tour.

What I've found most challenging thus far is definitely the multiple tempi, odd rhythms and of course the very virtuosic nature of the writing. Despite this, slowly but surely, things are beginning to come together and a week later, I am actually not that uncomfortable with the first half. I feel much more comfortable technically (though it still needs a vast amount of polish) and I am getting a better feel for the music. Whilst I'm satisfied with the progress, there still a lot of unlearned material and many other things that are not related to this audition to focus on.

By the end of next week, my aim is to have all the material to some extent learned. Not necessarily at tempo or continuously, but to have removed any sense of unfamiliarity from the music. With the part that's already learned, I'd ideally like to be able to maintain a solid tempo through it, and have cleaned up rhythm and intonation significantly. More importantly, I want to have switched my approach from a technical to musical one.

Whether or not I achieve that is yet to be seen (especially as life is getting busy again) but hopefully there will be good things to report next week! 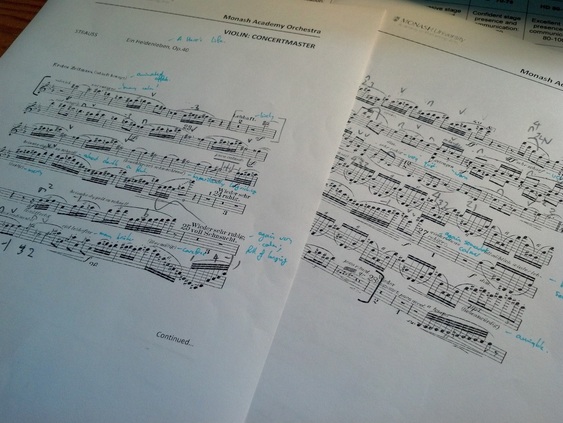 From Laurie Niles
Posted on January 9, 2015 at 3:33 AM
Daniel, you have my sympathy! Many years ago I had to learn a lot of this piece -- not even for a concertmaster audition, just for a lowly section audition! It was a really arduous process and let's just say I won't be on anyone's list to do any heroic solos. But through the thicket was always one wonderful thing: it's a great piece; really cool if you can listen to it and not think about how friggin' hard it is! (Same with Don Juan, IMO). What a great blog by Noah Bendix-Balgley, thanks for that link. I look forward to reading about your journey with it.
From Daniel Tan
Posted on January 9, 2015 at 4:50 AM
Thank you for your sympathy Laurie and great to hear from you! It really is a fantastic solo and I was almost shocked at how concerto-esque it really is in nature when I first saw it! I shall definitely be taking your advice and just try to enjoy it as a piece of music. (It's very overwhelming otherwise...)

Thanks for your support again; and I recently bought your book too, which I am loving! :)