When a classical music concert stops feeling like one: Review of Ray Chen in concert in Melbourne.

Last night I had the absolute pleasure of attending the penultimate concert of Ray Chen's national recital tour of Australia with Timothy Young (Piano) in partnership with Musica Viva Australia. The warm wooden interior of the acoustically superb Elizabeth Murdoch Hall (Melbourne Recital Centre) provided an ideal setting for the two hour feast of repertoire to follow. (No literally, Ray described in concert how he sees concert programming like a multi-course meal). As someone who has attended many classical music concerts, and performed in many, the air of anticipation prior to this concert was like something I have never experienced before. The energy in the room before Chen and Young walked onto stage was palpable, the audience obviously eager to get proceedings underway.

The two walked onto stage to hearty applause before launching into the evening's entree (the leafy green salad as it were) of Mozart's Violin Sonata No.22 in A Major (K305). Whilst a very palatable opening, something about the choice of repertoire didn't seem to sit that well with me personally. There were many nice moments throughout, and both performers clearly seemed to enjoy themselves but despite this I was left a little wanting after it was through.

Luckily, the main course for this evening (Prokofiev's Violin Sonata No.2) proved to be a fully satisfying choice. This in my opinion is where Chen really came into his own. (This was made more interesting by the fact that I am also learning this sonata currently). The playing was diverse, exciting and had much variety of colour, musical idea and emotion. So much so I had to control my urge to clap after the first movement was over. The rest of the sonata proceeded in this fashion, and you could feel the entire audience along for the ride with the performers. The sonata concluded to thunderous applause bringing the pair back onto stage 3 times to bow before interval. In actual fact, I felt quite relieved at he end of this portion of the recital, realising only after this was because I pretty much held my breath throughout the entire sonata.

The after interval palette cleanser was Bach's Partita No.3 in E Major. This provided an opportunity for Chen to show of his sound and his Strad, and this did not disappoint. From the very opening of the Prelude, the audience was clearly taken by his warm and rich sound, which reverberated stunningly around the hall. Whilst his interpretation again did not quite do it for me personally; to sit and bask in his wonderful sound whilst watching his flawless string crossing and intonation was none-the-less very enjoyable. Again, this was rewarded by heavy applause and cheering.

Finally onto the dessert for the evening, a trio of Sarasate; including two of his Spanish Dances (Habnera and Playera) followed by the famous Zigeunerweisen. From the word go, it became evident that Chen and Young's virtuosic flair, combined with the repertoire choice would produce a very tasty dessert. Indeed none of the pieces left anything to be desired, with wonderful extroversion and risk taking combined with strong ensemble and technique. The applause became progressively louder as each piece concluded, with the cheering and applauding becoming a standing ovation at the conclusion of the revealed program. Upon conclusion of the third bow, Chen grabbed the mic to announce an encore; "if you can stand more Sarasate...". The audience went wild and the pair launched into Introduction and Tarantella. This was the first of what would be three encores for the evening (the other two being Meditation and Theme from Schindler's List). I'm fairly sure the audience would have kept spurring them on to play more if they had been able to, but sadly after the three encores were through, it seemed like our concert was officially over.

At this point, it would be remiss of me not to applaud the wonderful work of the pianist Timothy Young who proved a worthy partner for Chen, matching him in his virtuosity, flair and technical security. His playing had the perfect amount of sensitivity and the two clearly have a wonderful partnership (both onstage and off-stage). This was further evidenced in the post concert Q&A which was well attended.

There are a few other things well worth noting. Firstly, it is clear how effective Chen has been in galvanizing a younger audience to see classical music live. The audience was significantly younger than I'm used to seeing at other similar concerts and Chen was mobbed after the Q&A for photos and signatures (myself included). The second, is how charismatic he is both on and off stage. Whilst his playing clearly connected with everyone in the audience, the portions of the recital where he interacted and bantered with the audience removed any sense of pretense or snobbishness. With the audience's cheering and thunderous applause at the end, begging for more encores, I no longer felt like I was at a classical music concert. Everyone felt free to enjoy themselves, the music, his awkward humour and the incredible atmosphere at the end. It was thoroughly refreshing.

I greatly admire what Ray Chen is doing for classical music in making it more accessible for people. Not only does his playing deliver in a major way, but so does everything else about his personality and off-stage efforts. I thoroughly enjoyed this concert and will jump at any future opportunity to see him live again! 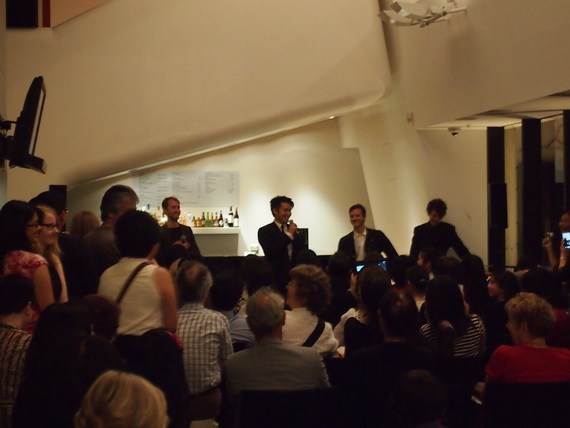