Up until recently I have only really been an observer of all the major violin competitions; Menuhin, Indianapolis etc. avidly following the coverage, the articles, the debate and of course the performances. Violin (and musical) competitions seem to get an interesting rap among the community. Some people think they're necessary, some people don't; some people don't like the judging, others do... the list goes on. So I was no doubt very curious to see it all for myself when I found myself short-listed as a semi-finalist for the Kendall National Violin Competition (Australia) (August 2014).

For starters, to be honest I have no idea how I managed to make it into the final eight in the first place. Armed will little recording experience and no pianist to record with (up until the week beforehand), I was somewhat surprised when I was informed of my progression into the semi-final round. Nonetheless, it is exciting in itself to see your playing and work validated in this manner (that said I could have been 8 out of 8 applicants for all I know) and I looked forward to the semi-finals greatly.

The competition day began early at Melbourne Airport amid the usual chaos and confusion that air travel often elicits. Sydney is only an hour of flying away from Melbourne so nothing too serious or taxing, and air travel always conjures a sense of excitement for me personally anyway! Despite the jet lag and tiredness, having arrived back from New York less than a week earlier (another story for another time); I hardly noticed due to my anticipation of the day ahead (not to mention my personal machinations regarding getting my violin on and off the plane in one piece).

Despite a temperamental plane door, arriving in Sydney and at the Con was no issue and my Dad and I enjoyed the time we did have to go for a walk around the gardens and Opera House beforehand. Despite being a proud Melburnian, I love Sydney and every opportunity to visit the city.

I had opted not to fly into Sydney the day before because unfortunately university orchestra dealt me a 7 hour rehearsal call the day before the competition. I would just have to manage my performance with one rehearsal before the competition on the day, with the official pianist for the competition. I arrived at the Con around 10:30am just before the first session commenced and was warmly greeted by the organisers and some other competitors before being shown a room to warm up in. Shortly after I enjoyed a smooth rehearsal with the wonderful pianist who also took the liberty to show me around the incredibly large music school that is Sydney Con.

It is worth pausing here to say that despite our best intentions, it is almost always impossible to come into these performances feeling prepared. As I mentioned previously, I had only recently arrived back from a month of study in the US, and was in the thick of a rehearsal period for an orchestral program the following week. As such, in the warm up room and with the pianist, I could feel my lack of preparedness showing. Be it in dodgy intonation, or just a general lack of musical refinement. However, whilst these things add to nerves no doubt, I had resolved myself earlier that day to just fully enjoy the new experience and do my best to make the best music I possibly could on stage later that day.

Thankfully for the semi-final, Kendall's repertoire requirements are not hugely onerous, requiring a movement from any of the solo Bach Sonatas or Partitas, a movement from a major violin sonata, and a show piece. I had chosen to play the following:

After warming up, rehearsals, some fresh air and lunch, the second half of the semi-finals commenced. Playing second in this session, I watched one of the following competitors go on and off from back stage whilst trying to direct my own attention to something non-violin related (as I often do to keep nerves in check).

My performance flew by in a blur. I remember having to contend with a shaky bow all through my Bach, before settling much more through my final two pieces. Personally, I often ruminate over technical concerns too much as a violinist, and as such I tried to focus heavily on the music and the gesture of the performance. Whilst it definitely wasn't the most flawless or refined performance I have ever given, I would like to think I achieved the character and musicality I was aiming for that day. To me though, what I most fondly remember of that performance is how much I enjoyed it, and how genuinely lucky and alive I felt to be on that stage that day. Upon talking to some audience members later, I was glad to hear that came across.

However, the highlight of my day came when I finally got to sit down and listen to the two remaining competitors. To cut a long story short, I was absolutely blown away by what I heard. Both had such wonderful sound and suppleness of tone, incredible senses of virtuosity and colour, but above all, great generosity of musical intent. I left those performances feeling thoroughly inspired and renewed in my own quest to better my ability on the instrument.

In general, that is how I felt about the whole day. I didn't get through to the finals in the end (unsurprisingly), but I didn't feel like I had lost either. I had just experienced an inspiring day of music making, welcomed openly and warmly into a new environment by its lovely organisers and stakeholders. I cannot speak highly enough of the competition. I felt incredibly welcome the entire time, and the environment cultivated was nothing but open and friendly. My only regret was honestly not being able to see more of the performances, or to meet more of the competitors properly. I flew home that evening utterly exhausted (I fell asleep against the window, which made me glad I chose that seat) but entirely renewed in my focus and desire to become a better musician.

I hope that I can make it into such competitions in the future, and enjoy more of what other violinists are capable of. With a lot of work, a new program and a bit more new found experience under my belt, hopefully Kendall will welcome back with open arms in 2015. 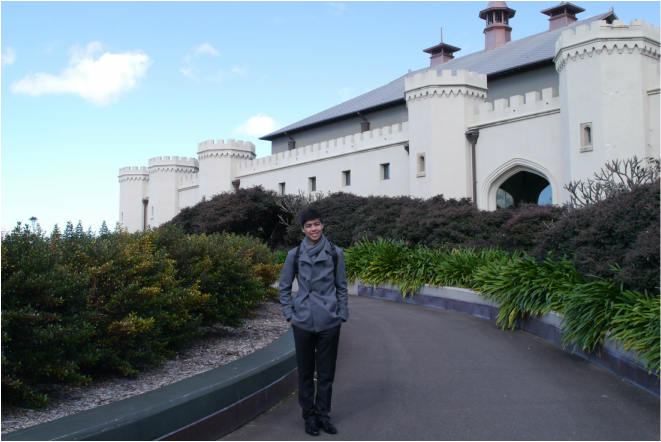