An American Story: How to make an interactive chamber work 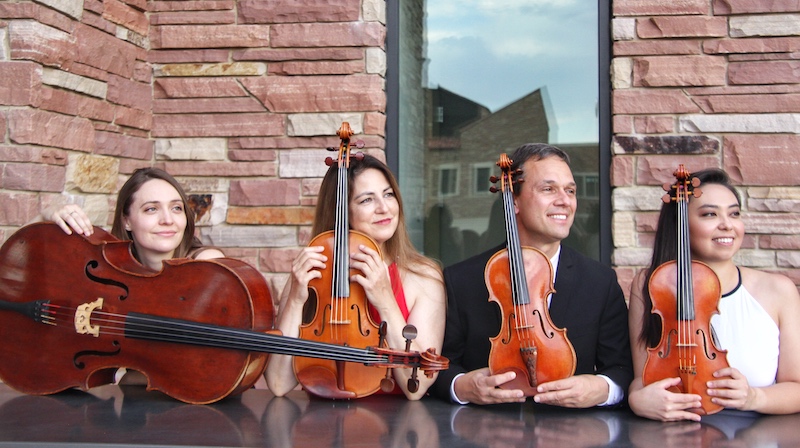 As with most musicians, the COVID pandemic resulted in the cancelation of all of our concerts and projects. As many did, we pivoted and began investigating the use of streaming and recorded video performances to reconnect with our audiences and create engaging programs. But even as we developed new tech skills and had some nice successes, audience feedback always returned the same theme; our fans loved and appreciated the online content, but continued to say, "It’s just not the same as in person!"

This led us to think more deeply about online performances and what they have to offer that is different from live shows. We began to ask: are there unique aspects of the digital platform that we could take advantage of to create compelling and beautiful works? With this question in mind, we focused on the idea of true audience/viewer interaction, and whether that could be incorporated into a work for string quartet. The result is An American Story, a multi media work that combines original music composed by the quartet with dynamic visual art. In addition to the presentation, the project features "choice points," wherein the viewer determines the course and outcome of the narrative.

The first thing we needed was a storyline. After some discussion, we found that what we all were interested in was the story of how our various ancestors came to immigrate to America, their reasons for leaving the familiar behind, and what they encountered when they built their new lives. This decision led us to structure the project in four chapters, or movements, each focused on a different quarter member’s family history.

The next part of the process was for each of us to construct our individual story trees. The technology we are using allows the viewer to make choices, so we had to imagine different scenarios and endings and construct unique paths for each narrative.

Once each narrative had been planned out, we then had to compose the music. While initially we had talked about commissioning a composer, we were encouraged by quartet member Korine Fujiwara, who is a well established and widely performed composer, and decided to compose our own music to accompany our stories. This part of the process was really fun, if a little stressful! Once the music was composed, we sent it to visual artist Janet Antich. We had already sent her our storylines, family photos, letters, and any other documentation that we had. Janet began making drawings and sketches of some of the scenes so that we could see how her vision added to our own.

The final step was recording all the music and figuring out which software platforms would allow for the kind of user choice experience that we were looking for. After spending a lot of time investigating and reading up on the various technologies, we settled on a company called hihaho. Their platform offered us everything we needed, as well as reasonable prices that fit into our budget.

Putting it all together resulted in the American Story project. An audience member/viewer starts with an interactive map, where they can choose out of four starting points, each representing on of the quartet member’s stories. Once they begin one of the stories the video begins. As the video progresses, it comes to a "choice point" and the viewer gets to decide what happens next. This is presented quite clearly to the viewer, and as soon as they make their decision, the video smoothly continues. Every viewer has a unique experience, both in the order of the four stories and in the outcomes of each. We designed an optional survey that viewers can take, and the feedback we have gotten has been overwhelmingly positive, but this feedback allows us to make small tweaks if need be and will inform us to future projects that employ similar technology.

The American Story was supported in part by a grant from PNCArtsAlive, and the project can be viewed at this link. All music was composed and performed by Carpe Diem String Quartet, which was founded in 2005 in Columbus, Ohio and includes violinists Chas Wetherbee and Marisa Ishikawa, violist Korine Fujiwara and cellist Ariana Nelson.