Interview with Violinist Robert McDuffie: Brahms and Beyond

January 9, 2023, 12:45 PM · My admiration of violinist Robert McDuffie spans decades. When he was first starting out, he performed the Bruch concerto with my father’s orchestra in Colorado. My dad remembers him all these years later as "an impeccable player, a first-rate musician, and a very kind man." I have followed his career ever since and I’m a bonafide McDuffan. 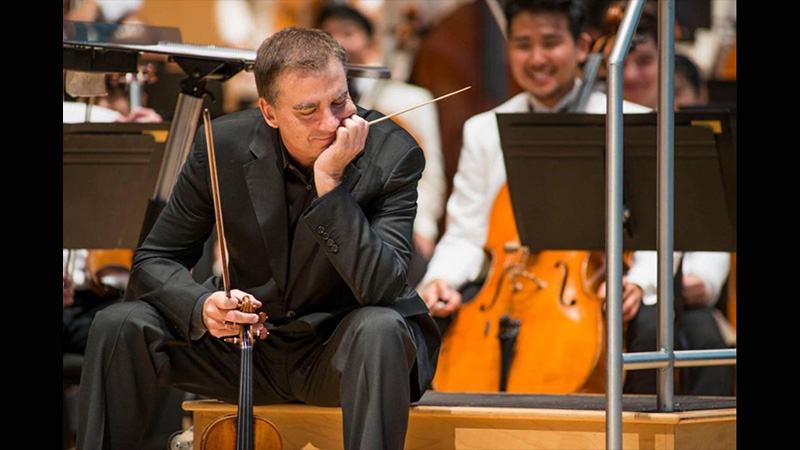 Several years ago, I had an opportunity to hear him live at Brevard playing Bernstein’s Serenade, After Plato’s Symposium. When I mentioned this to McDuffie in our interview last week, he politely quipped, "How’d I do?" That humility and boyish manner, coupled with his pleasing Georgia twang, made me realize that sometimes you really can meet your heroes. And not be disappointed.

In an international career encompassing the standard concertos with top-tier orchestras, McDuffie also has performed Philip Glass’s Concerto #2: An American Four Seasons over 100 times (a work that was written for him). A true champion of American music, you’re as likely to hear him play Concerto for Violin, Rock Band, and String Orchestra with childhood friend and composer, R.E.M.’s former bassist Mike Mills, as you are the Beethoven violin sonatas. He might be teaching at his namesake conservatory, the Robert McDuffie Center for Strings, in his hometown of Macon, Georgia, or playing Schubert octets at the Rome Chamber Music Festival (a festival he founded 20 years ago "to work in arguably the most beautiful city in the world and program repertoire that I love").

Philip Glass's American Four Seasons, written for McDuffie, cued up to the cadenza.

McDuffie’s career is a fascinating one that stems from what he describes as his own "King-for-a-Day wish that the classical business model shift to more of a musician-led self-governing model." While he expresses profound gratitude and appreciation for the opportunities he’s been given, McDuffie said, "I realized at a certain point in my life that I wanted to be the one to create my musical opportunities." Having a manager who is "more partner than agent," they work to create projects that are "meaningful, challenging, and won’t punish an audience."

Their latest venture is a seven-city tour with the Czech National Symphony Orchestra, with high-visibility stops at the prestigious New Jersey Performing Arts Center and New York’s Carnegie Hall. McDuffie hand-picked his featured piece – the Brahms violin concerto. By his own admission, it’s a concerto he didn’t completely invest himself in when he first studied it. During the pandemic, however, it became his personal project – some might say, obsession.

McDuffie notes that the time for Brahms was simply right. Without the slightest hint of swagger, he said there is no longer a passage that he fears. And if you force him to pick one that he loves (as I did), it’s "the return of the beautiful theme after the cadenza in the first movement." As for the breathtaking second movement, McDuffie says he plays it with reverence, even envisioning himself back in his youth, when playing in churches was his norm. He spoke about being "settled" with the concerto, something he describes as a "powerful feeling that comes after a great deal of work." This settling process allows time to slow down so that you can create your own energy. "You’re driving 55 MPH, but if you feel like speeding up to 75, you can. You actually can manipulate time."

So, what’s his attitude when tackling a beloved piece that many in the audience can probably sing along? "The standards are so well known, every nuance, every phrase, and that adds a little more pressure." But he found his way, primarily due to an epiphany he had when working on Miklós Rózsa’s violin concerto years ago – a work that didn’t have much recognition at the time. "Because there were not the expectations one finds with the standard repertoire," McDuffie said, "I had no fear. I simply made the piece my own." He credits an “extra layer of recklessness” that allowed him to feel free and truly embrace the piece because there was no preconceived roadmap of how it was supposed to go.

He decided to take that same approach when performing the classics. "It’s easier to play the standards now because of all my work with living composers," he said. "I try and get to a place in my head where if I do play the Mendelssohn, I play it as if it were written yesterday… as if I were the only one putting a stamp on that piece. That mindset has freed me up."

And while he cautions young violinists about having too many interpretations caught in their minds and ears, McDuffie did say that when he was first learning the standard repertoire and wanted to check pacing, bowings, and fingerings, his go-to recordings were always those of Itzhak Perlman – someone with whom he shares his DeLay/Galamian training. "His recordings are always beautiful, but never eccentric."

Perlman is also the reason McDuffie became a violinist. The story in his own words:

"I heard Perlman play when I was 14 and he changed my life. I’d been playing the violin for eight years. I was good, but not a prodigy. I was also a mediocre athlete. I’d been promoted to the starting five on my basketball team, which is a huge deal when you’re an adolescent. Our big game was coming up against the rival school. And it was the same night Perlman was coming to Macon. But I had to play that game! It was a no-brainer. Or so I thought. My parents made me go to the concert. I was so angry I made them sit in the back of the hall and I sat alone on the front row. It turned out to be one of those days that put me on a new path. First, I saw how he struggled physically to even get on stage. Then he played Tartini’s Devil’s Trill and I thought it was the most beautiful sound I’d ever heard. It was so effortless. Perlman was 26 at the time. He just blew me away. I went backstage and I was so intimated I couldn’t speak. I didn’t care about basketball after that night."

McDuffie noted that he’s played poker with Perlman over the last 40 years, and at one point shared this story with him. McDuffie said, "Perlman just looked at me and said, 'You would have made a lot more money playing basketball.'"

An Alternative to the Traditional Conservatory

McDuffie is as passionate about the next generation of string players as he is about his personal career. He raises the pertinent question: What is our responsibility as a conservatory in the 21st century?

The Robert McDuffie Center for Strings, housed at Mercer University in Macon, Georgia, may just be the answer.

The school offers a hybrid program, with music, liberal arts, and business equally in the mix. "Certainly, music is fundamental to our curriculum, and we have a stellar faculty of performing musicians. But the area that truly distinguishes our program is our association with the business school. Our students learn economics, accounting, professional branding, business law, technology, and entrepreneurship in anticipation of assuming more managerial roles. We’re going to make sure our students are ready for the world."

(More on the center and its unique relationship with the Atlanta Symphony and the Rome Chamber Music Festival in future violinist.com articles.)

In preparing for this article, I spoke to a dozen professional musicians about Robert McDuffie and their reactions were fairly similar to the one my father had. "Superb player," "wonderful violinist," "extraordinary technical facility." Again, similar to my father’s reaction, secondary to each comment about McDuffie’s playing was something along the lines of "great guy," "he’s really nice," "oh, he’s a terrific person." I’ve heard him described as "a mixture of sheer enthusiasm and generosity." Well, you get the idea. 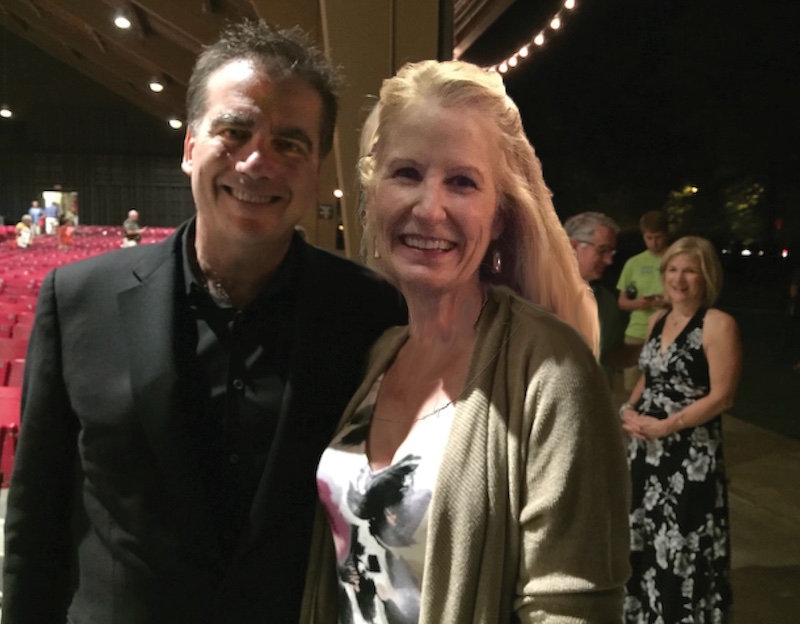 McDuffie graciously posing with a fan (me) after his performance at Brevard, North Carolina.

It does not surprise me that people first and foremost remember McDuffie’s playing. After all, he has attained a level that most of us can only dream about. But the fact that people recall the man’s kindness. That simply speaks volumes. I can’t think of a better legacy, nor a better person to guide the next generation of violinists.

And, Oh, That Violin

McDuffie plays the "Ladenburg" violin, made by Giuseppe Guarneri del Gesù in 1735. Through a brilliant move, McDuffie created a team of investors to help him acquire the instrument, which you can read about here.

January 10, 2023 at 02:17 AM · Diane, what an inspiring article! I had my oldest son, who is learning violin, read this and he is so excited to lookup all he can about McDuffie. Kindness is paramount, and I love the example McDuffie has set in his professional career.

January 10, 2023 at 09:04 AM · Diana, your article really brings out Robert McDuffie's musicality and character. The Perlman story is a first class example of how one artist can inspire another, and the extract from the Philip Glass Concerto No. 2 was most enjoyable. It is difficult - I won't say impossible - to convey music in words but you manage to do it! Maybe one day you might consider an article on how to write about music.

Richard: I appreciate your thoughtful comment so very much. When I had a small crisis of confidence the other day, Laurie (v.com Editor) said, "Just pretend like you're telling your friends about what you learned in the interview." I think that was great advice since many in this community (you, for example) feel like friends at this point.

Teresa: Thank you so much!

January 12, 2023 at 03:36 PM · Great article, Diana! I haven’t seen Bobby since he was 19 and we toured Russia together with the New York Pro Arte Chamber Orchestra. He sounded great then, and he sounds fabulous now. Creating a “meaningful” career in music is always difficult, and he seems to have figured out his own vibrant path.

January 12, 2023 at 08:12 PM · David, I recall hearing that Russia story. Your last sentence is eloquent and oh, so true. Thank you for your wonderful comment!